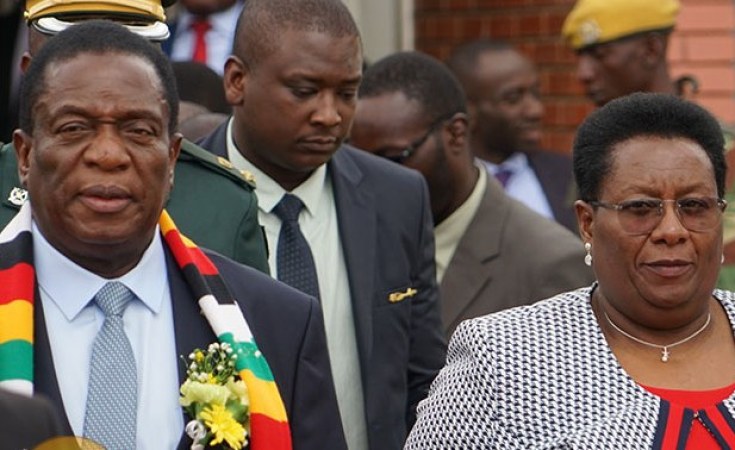 Zimbabwe's fight against corruption, which has not yielded meaningful dividends in the past three decades, can be rejuvenated if President Emmerson Mnangagwa allows entities formed to tackle graft to act impartially without undue influence, among other measures.

Despite Mnangagwa's pronouncements that his administration is prioritising fighting corruption, the perpetuation of the vice shows that his call is much ado about nothing.

Two years ago, Mnangagwa emerged victorious from a contested poll, acknowledging in his inauguration speech that the cancerous vice which flourished during former president Robert Mugabe's 37-year rule was hindering efforts to revive Zimbabwe's floundering economy.

He pledged that his administration would fight sleaze, "without fear or favour."We must as a society encourage and inculcate the culture of hard, honest work. The prosecution of perpetrators of corruption will be carried out without fear or favour," Mnangagwa spoke emphatically as he delivered his inauguration speech on August 28, 2018.

"It would be very difficult to say Zimbabwe robustly tackled corruption last year because there is no framework that speaks to the collective will of fighting corruption.

"So for us there is need for a discussion of an anti-corruption framework on what the key anti-corruption priorities the country should embark on for the next three-five years are," he said.

Without any landmark corruption case prosecuted so far, Mnangagwa's calls to curtail sleaze, particularly by an elite political syndicate sounds hollow and insincere. This is particularly so, because Zimbabweans are well aware that corruption has been rife in the country.

The looting of the country's diamonds and the abuse of the command agriculture scheme, for instance, would be a good starting point for any serious corruption investigation.

But to show the lack of seriousness, a parliamentary probe into how billions of dollars allocated to command agriculture were spent flopped after Zanu PF legislators sabotaged the investigation, purportedly because they do not recognise the chairperson of the Public Accounts Committee, Tendai Biti, whose MDC party does not recognise Mnangagwa as the legitimate head of state and government.

If Mnangagwa -- who in any case supervised the programme while still Mugabe's deputy -- was serious about tackling corruption, he would have called his legislators to order to enable the investigation to proceed.

In 2019, the President drew intense criticism when he named Justice Loice Matanda-Moyo to head the 12-member Zimbabwe Anti-Corruption Commission (Zacc), which also had come under the spotlight for its perceived lack of appetite to combat graft.

Justice Matanda-Moyo is the wife of Foreign Affairs and International Trade minister Retired Lieutenant-General Sibusiso Moyo. The former army chief was the face of the putsch that propelled Mnangagwa to the helm.

Critics immediately pointed out that Matanda-Moyo's controversial appointment was deeply steeped in nepotism, and mimicked the same patronage system that Mugabe created which left Zimbabwe entangled in a web of corruption.

Admittedly, though the appointment of Matanda-Moyo has won praise from some people who say it was based on merit, demonstrable competence and skill, her husband's close association with Mnangagwa has raised eyebrows.

Fresh in her new job, Matanda-Moyo last year moved in swiftly to arrest former Environment, Tourism and Hospitality minister Prisca Mupfumira for her alleged role in a US$95 million corruption scandal unearthed following a forensic audit report on the operations of the National Social Security Authority (Nssa).

Mupfumira, who is in the dock over the US$95 million scandal, is alleged to have committed the crime during her time as Public Service, Labour and Social Welfare minister. Though Mupfumira's arrest was hyped up as a "big catch" by Mnangagwa's administration, critics pointed out that the disgraced minister had fallen out of favour with the powers that be.

Political analyst Maxwell Saungweme noted that the so-called high-profile cases Zacc was focussing on were narrowly meant to settle political scores, and would not rid Zimbabwe of corruption.

"Without discounting on the merits of the allegations, those are purely politically-motivated arrests by shameless men who have the audacity to invoke the state apparatus to harass women they have fallen out of favour with. Those arrests are clearly a sign of politically motivated gender-based violence, and flagrant abuse of state power," Saungweme said.

"They eviscerate the whole essence of why independent commissions were formed. They actually lead to an increase in corruption as the arrests themselves and the decisions to do the arrests are corruptly procured and conceived."

Last year, Zacc announced it had made 101 arrests, 10 of which were high-profile cases.The announcement came at a time the anti-graft body had also arrested Marry Chiwenga, the estranged wife of vice-president and former Zimbabwe Defence Forces (ZDF) commander Constantino Chiwenga on a slew of allegations ranging from externalising US$1,9 million which she used to purchase a house in South Africa, luxury vehicles and attempts to kill her husband.

The couple is on the verge of divorce, and critics argue that the former commander is abusing his influential position and Zacc to settle a domestic dispute with Marry. Marry has since been granted bail, having spent the Christmas holiday in remand prison.

Mnangagwa also controversially set up a Special Anti-Corruption Unit in his office in 2018, constituted of hand-picked prosecutors. The move, which again sparked criticism, raised questions given that Zacc and other constitutionally mandated bodies are in place.

At the time Mnangagwa set up the Special Anti-Corruption Unit in his office, constitutional law expert Professor Lovemore Madhuku told this newspaper that the President had no such authority, which would compromise his impartiality.

"The constitution provides a clear framework on the institution with power to fight corruption, which is the NPA [National Prosecuting Authority]," Madhuku said at the time.

"He (Mnangagwa) is not allowed to do that (setting up a Special Anti-Corruption Unit housed in his office). He is trying to re-write the constitution. He has to push for an amendment to achieve that."

Mnangagwa has also been criticised by the international community, particularly the West, which has raised concern that Zimbabwe's lethargic approach to embracing far-reaching reforms, including clamping down on graft, dampened the country's re-engagement drive.