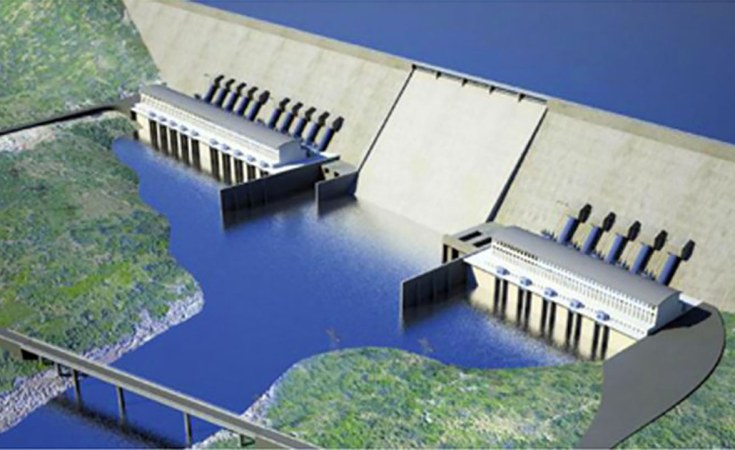 Ethiopian Prime Minister Abiy Ahmed Ali has asked President Cyril Ramaphosa to intervene in the dispute between Ethiopia and Egypt about the building of the Great Ethiopian Renaissance Dam.

The 2019 Nobel Peace recipient said at a press conference at the end of his three-day official visit to South Africa on Sunday that Ethiopia believed in a win-win approach to resolve this issue.

"I made this request to President Ramaphosa as he is a good friend of both Ethiopia and Egypt, and as an incoming chair of the African Union [for 2020] he can make this discussion with both parties to resolve the issue peacefully," he said.

Abiy stressed that peace was necessary for economic development.

Ramaphosa, who extended a warm welcome to Abiy and who invited him to attend the ANC's 108th birthday celebrations in Kimberley on Saturday, said he was willing to help craft an agreement.

"I had a discussion with [Egyptian] President [Abdel Fattah] el-Sisi and he said they are willing to have discussions with Ethiopia, and the same has been pronounced by Prime Minister Abiy, and I believe a solution is possible," he said.

Efforts in the Ethiopian capital Addis Ababa this week to resolve the long-running dispute between Ethiopia, Egypt and Sudan over the giant hydropower dam on the Nile, resulted in a deadlock. But a deadline of Wednesday (January 15) has been agreed with Washington, which has acted as a mediator in the dispute.

Disagreement about the filling and the operation of the $4 billion dam has sparked a diplomatic crisis between Egypt and Ethiopia, as Cairo fears that the dam would deprive its more than 100 million population of the Nile waters, on which they are dependent.

Ramaphosa and Abiy also spoke about the AU's 2020 theme of silencing the guns.

South Africa's chairing of the AU coincides with its third non-permanent two-year membership of the United Nations Security Council.

Ramaphosa said a peaceful and stable environment was important for development and he congratulated Abiy on the peace he brokered between his country and neighbouring Eritrea after his appointment in 2018.

A diplomat told News24 that escalating troubles in the continent meant the deadline of silencing the guns in Africa in 2020 would not be met, but would have to be deferred by a decade.

Abiy, in turn, invited South African businesses to invest in his country, which has in recent years had an economic growth rate of more than 7%.

Just like Ethiopians had come to South Africa and invest here, Abiy said South Africans should "come and invest in Ethiopia, and come and make it their home as well".

He said his administration wanted to open his country - which was previously closed to foreign investors - for business.

"We look to the private sector to come and help create prosperity for the mutual benefit for both sides."

He referred specifically to telecoms, energy and logistics as industries where South Africans have expertise.

In response to a question about whether Ethiopia was ready, from a logistics and peace and security view, to hold elections, Abiy admitted there were problems, but said: "we need to go to elections to confront [those] challenges".

Abiy was also asked to comment on United States President Donald Trump's remarks that he should have shared the Nobel Prize with Abiy because he helped create peace in the region.

Abiy said he wasn't aware of the criteria the Nobel Committee used to select recipients for the prize.

"I'm not working for the prize," he said, but added, "if President Trump [has complaints] it must go to Oslo and not Ethiopia".

Abiy later rushed to Johannesburg where he addressed a crowd of a few hundred Ethiopian expatriates in the Wanderers Stadium and urged them to work for peace in their home country in the same way Nelson Mandela worked for peace in South Africa.

Why Has the AU Been Silent On the Ethiopian Dam Dispute?
Tagged:
Copyright © 2020 News24Wire. All rights reserved. Distributed by AllAfrica Global Media (allAfrica.com). To contact the copyright holder directly for corrections — or for permission to republish or make other authorized use of this material, click here.