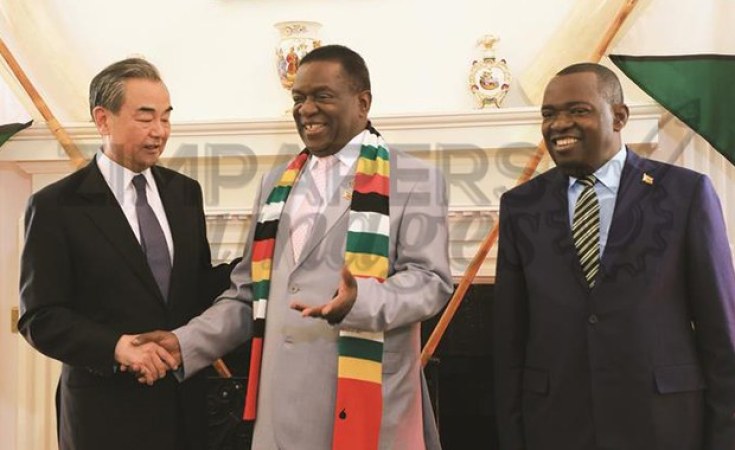 President Emmerson Mnangagwa, who is on his annual leave, on Monday broke the vacation to meet the Chinese Foreign Minister at State House in Harare.

Speaking to journalists after meeting Chinese Foreign Minister Wang Yi, Mnangagwa said that Zimbabwe was happy with the support it was receiving from the Asian country.

"I do not know which country you have in mind which has received more support from China and if it is an African country we are so happy that China is helping a sister country but we as Zimbabweans are happy with our relations with China," he said.

Mnangagwa said Wang Yi was very pleased to meet him.

"He is very happy for the visit and that we had the occasion to go over our relations between Zimbabwe and China on all issues and those that whom are satisfied and our relations are on a solid foundation. What remains is further consolidation and deepening of those relationships both political and economic," he said.

Mnangagwa was also asked whether Zimbabwe was going to scale up its relationship with China.

"They were scaled up in September 2018, on all-whether friendship between the two countries as two strategic comprehensive partners. I am not so sure perhaps platinum relationships," said Mnangagwa.

Zimbabwe has been fighting to mend lost relations with the international community with all the hope this could help restore the country back to economic prosperity.

China has become the biggest investor and economic partner on the African continent.

Most government construction projects in Zimbabwe are being done by Chinese companies. This includes the new parliament building in Harare's Mt Hampden, Hwange and Kariba power stations and the Zimbabwe Defence College.

Commenting on the visit, Information Deputy Minister Energy Mutodi said it was historic and a slap in the face of the United Kingdom, European Union and the US which have insisted on keeping their targeted sanctions on some Zimbabwean politicians.

"The historic visit to Zimbabwe by the Chinese Foreign Affairs Minister Mr Wang Yi is a slap in the face of Britain, US and the EU who have remained hostile. We will in return, prioritise Chinese business interests ahead of any Western countries," he said.

Last November, China and Zimbabwe butted heads after Harare said it had only received US$3.6 million in aid from Beijing in 2019 - 40 times lower than the figure claimed by China.