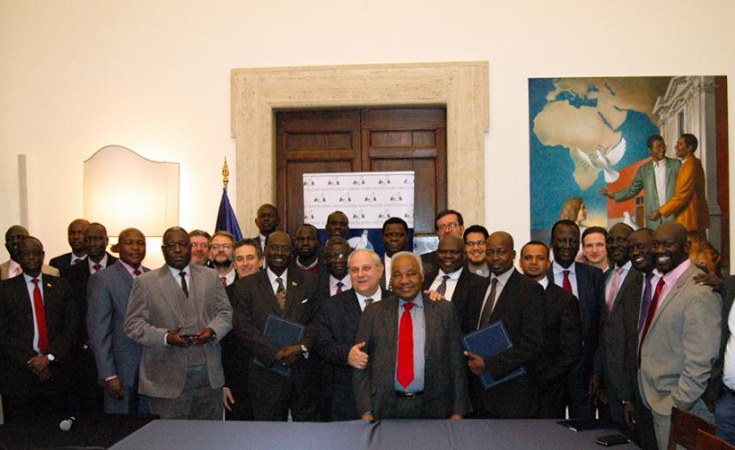 Following is the statement issued by the Community of Sant'Egidio,  a lay Catholic association in Rome that has been mediating the conflict among parties in South Sudan:

The Rome Declaration signed today at the Community of Sant'Egidio "brings together all the political parts of the country for the first time." Paolo Impagliazzo, Secretary General of Sant'Egidio recalled it, thanking all the participants for their efforts. The document, said Impagliazzo, is the result of many working days but also of Sant'Egidio's commitment in recent years to facilitate political dialogue in South Sudan.

There are three cornerstones of the agreement: the "solemn" commitment to the cessation of hostilities starting at midnight on January 15th; the commitment to discuss and evaluate together - in Sant'Egidio - mechanisms to resolve differences; and the guarantee for humanitarian organizations to be able to operate in the country in support of the civilian population. Today's Declaration was signed by members of the delegation of the central government of South Sudan, by representatives of SSOMA, the South Sudanese opposition movements who did not join the revitalized peace agreement of 2018 in Addis Ababa, and by the representatives of the opposition movements (SPLM-IO and NDM) that signed that agreement.

"The ceasefire is necessary to rebuild trust and hope in our people," said Barnaba Marial Benjamin, the envoy of President Salva Kir. "We followed the invitation of Pope Francis to leave aside the differences and to seek what unites us, the method that inspired the Community of Sant'Egidio as well" and continued indicating how "in these days of meeting between South Sudanese people it was possible to recognize the common history that unites us."

This is a signature "without any pre-conditions" and with the commitment to work on building lasting peace together with the government and the other signatories. Pa'gan Amum Okiech, the spokesman for SSOMA, said that the credit for the agreement goes to Pope Francis. "That gesture of kissing our feet" on the occasion of our visit to the Vatican (last April 2019) "inspired us. His recent appeal for a New Year of prosperity and brotherhood is a dream coming true," said the spokesman. He continued saying: "the time has come to end hostilities and learn from our mistakes" and "the process must be inclusive for all". In this regard, Okiech said that he was "pleased" that the opposition Sudanese People's Liberation Movement (SPLM-IO) and the Democratic National Movement (NDM) participated in the meeting.

ROME DECLARATION ON THE PEACE PROCESS IN SOUTH SUDAN