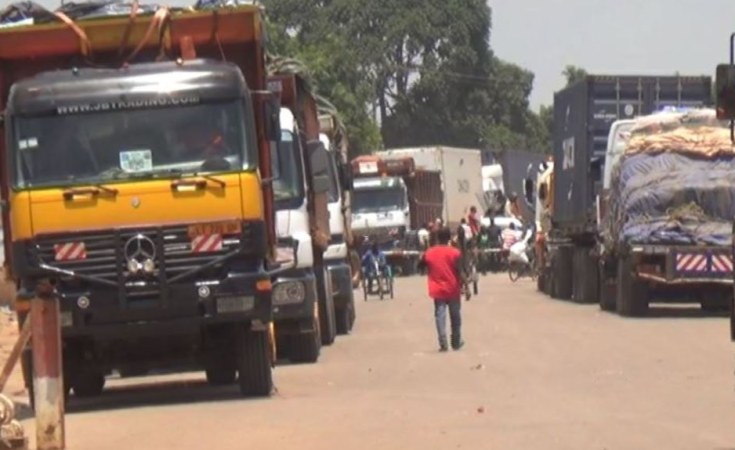 Cameroon has bowed to pressure from truckers and is dismantling illegal roadblocks and check points from the country's port city of Douala to the Chadian capital of N’Djamena.  For more than a week, truckers refused to drive the route because of extortion at the checkpoints. Drivers have resumed full activity now that officials are listening to their complaints.

Cameroonian truck driver Ngaibai Bassirou drives his semi-trailer carrying building material out of the Ngaoundere truck stop in northern Cameroon on his way to the Chadian capital.

Ngaibai said after grounding his truck for 10 days he and 90 other truck drivers decided to resume deliveries because authorities in Cameroon are dismantling some of the illegal check points that extort money from him and his peers.

He said what made them very angry and stop transporting only basic goods like food and medication to Ndjamena was that they were spending up to $500 to pay their way through the many Illegal check points between Douala and Ndjamena and a similar amount on their way back.

Bassirou said truckers were surprised that after complaining to the government several times last year, the number of check points increased, and the money collected from truckers skyrocketed.

The truckers began their protest on January 2.

Aashir Issa, vice president of Chad's National Trade Union of Truck Drivers, said Cameroon should not only dismantle the illegal check posts but should also make sure people who create such posts are punished.

He said the government should make sure the police, gendarmes and customs officers who mounted the illegal check points answer charges in courts of law. He said the dismantling of 15 unauthorized control posts in a distance of 70 kilometers within 12 hours indicates how truck drivers were severely exploited and that they are ready to indicate to the governor so many other illegal check points where transporters are harassed to give money without receipts.

Kildadi Tagueke Boukar, governor of Cameroon’s Adamawa region, where Ngaoundere is found, supervised the clearing of the check points. He said some of them were created by Cameroon security services for what they described as strategic reasons, but that such reasons cannot undermine a decision taken by Cameroon and Chad to regulate transport between the two countries.

In January of last year, Chad and the Central African Republic dispatched senior customs officials to Cameroon to look into the problem of the illegal checkpoints.

Chad and C.A.R. businesses threatened to start importing and exporting goods through Cotonou in Benin, although Douala is the nearest ocean gateway for the landlocked countries.

In March 2019, the transport ministers of Cameroon and Chad signed an agreement recognizing only one security check point on the road between Douala and Ndjamena.

Cameroon’s ministry of transport said it has reduced the number of check points along the road by 75 percent, and officials have promised to dismantle the rest.