Kenya: Scientists Create Another Embryo in Bid to Save Northern White Rhinos 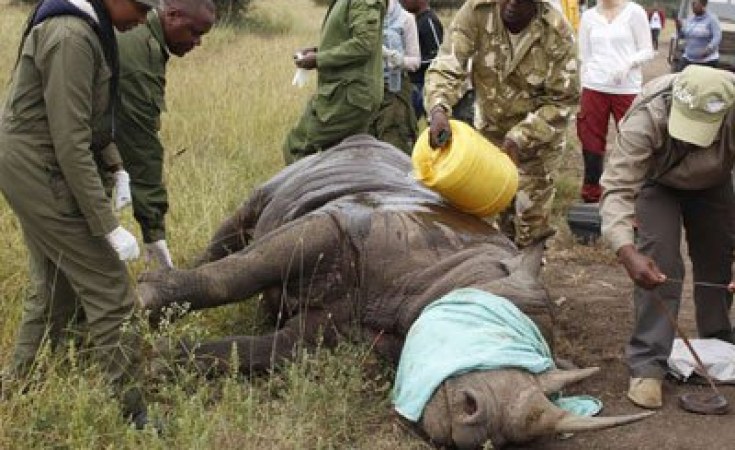 Hope of saving the northern white rhino from extinction has been boosted further after scientists created one more in-vitro embryo.

The young rhino created in December brings to three the number of embryos awaiting surrogate mothers.

"This significantly increases the chances of successfully producing offspring," Ol Pejeta Conservancy, one of the players in the delicate experiment, said in a statement.

"The procedure has proven to be safe and reproducible, and can be performed on a regular basis before the animals become too old."

The mission to rescue the near-extinct northern white rhinoceros began in August 2019 when a team of scientists and conservationists from Kenya, Czech Republic, Germany and Italy harvested eggs from the two remaining females at Ol Pejeta.

The two animals were placed under general anaesthetic and the eggs harvested, then transported immediately to the Avantea laboratory in Italy.

Following the incubation and maturing of the nine eggs, five were selected and fertilised, but only one survived, developing into a viable embryo.

"I urge the scientists to continue digging deeper into technology and innovations to ensure that not only this concerned species does not go extinct, but other species that are faced with similar threats," he said.

The first ever attempt at transferring the embryos for implantation is now expected to happen before June this year, according to Kenya Wildlife Service spokesperson Paul Udoto.

This is amidst challenges of the transfer being delicate and complicated, with the main hurdle being to perfectly place the embryos for implantation in the uterus, as Dr David Ndeereh, the head of veterinary services points out.

"Apart from that, the other main challenge is to determine the perfect timing in the reproductive cycle of the females, which is essential before undertaking the transfer," he notes.

Even as the scientists prepare two southern white rhinos to act as surrogate mothers in the next 16 to 18 months if the transfer will be successful, Dr Ndeereh says the two mothers must have previous history of breeding devoid of any complications during pregnancy and birth.

They must also be healthy to be able to carry the pregnancy to term.

"In-Vitro Fertilisation is not the only approach being undertaken. Scientists will look into other approaches should this one not succeed. However, with the development of the 3 embryos, there are good prospects of success."

"Harvesting of the eggs will continue in the meantime so as to maximize the number of embryos developed for future transfer before the 2 females become too old.

To achieve the best possible results for work with pure northern white rhino embryos, the team relies on experience from similar embryo transfer procedures in southern white rhinos that have been performed in order to address reproduction challenges in European zoos.

Despite the fact that more research is still needed, the team expects that a first attempt for this crucial, never before achieved step, may be undertaken in 2020.

"Our repeated success in generating a third embryo from Fatu demonstrates that the BioRescue program is on the right track," said Thomas Hildebrandt, Head Department of Reproduction Management, Leibniz-IZW.

"Now, the team will make every effort to achieve the same result for the 30-year-old Najin before it is too late for her. We are strongly committed to our plan to transfer a northern white embryo into a surrogate mother in 2020 to ensure the survival of the northern white rhino."

The consortium is partially funded by the German Federal Ministry of Education and Research (BMBF) and comprises of internationally renowned institutions from Germany, Italy, Czech Republic, Kenya, Japan and USA.