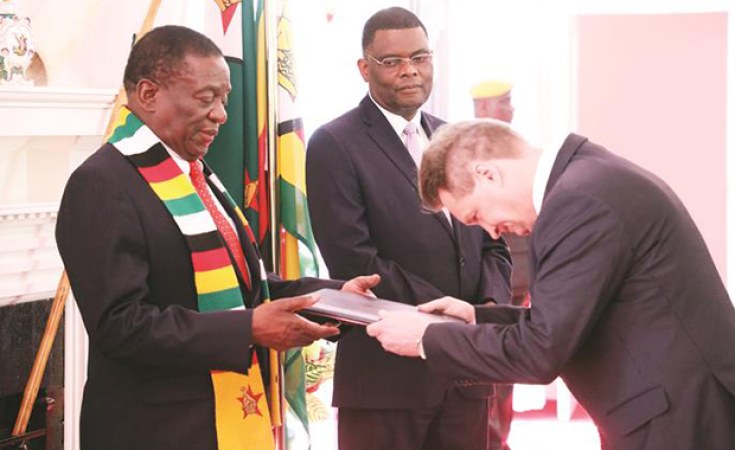 The European Union (EU) ambassador to Zimbabwe, Timo Olkkonen has described as 'nonsense' President Emmerson Mnangagwa's proposition that sanctions are impeding on the country's economic progress.

Speaking to 263Chat on the sidelines of the EU announcement of a US$ 18.7 million humanitarian aid for Zimbabwe, Olkkonen said only one company, the Zimbabwe Defense Industries and two individuals-former President Robert Mugabe and his wife Grace, are on EU's restrictive measures list.

"No, I completely object to that kind of argument. If you look at the EU restrictive measures and current status, we only have the arms embargo. There is one Zimbabwean company on the list that the European Union should not be doing business with that is the Zimbabwe Defense Industries and there is just two active members that is the former head of state, who of course passed away and the former first lady and they are the two only persons on that list.

"So the argument that restrictive measures will be impeding economic progress in Zimbabwe is Nonsense," said Olkkonen.

Since coming to Zimbabwe in 2018, Olkkonen has never minced words against human rights abuses by the Zanu PF government.

He has on several occasions invited the wrath of the Zimbabwe government for openly criticizing Harare's anti-sanctions mantra which he said was unnecessary in the absence of political reforms.

Last year, Mnangagwa and Olkkonen engaged in a war of words over the western imposed sanctions with the EU representative telling Zimbabwe to stop its crackdown on opposition protests.

In his response, Mnangagwa said Olkkonen was using a wrong platform to address his concerns.

Meanwhile, Olkkonen has raised concern over the security of humanitarian aid in the country in the wake of past accusations of mishandling of relief aid, particularly post-Cyclone Idai disaster last year.

"We hope it will be secure, it's an important question for us. What is important to realize is that the EU is not delivering directly, we wouldn't have the man power, that's why we work through our partners, the international NGOs, the Zimbabwean NGOs to deliver that aid, but it's a question that we are constantly raising with our partners that it's very important that when we are using European tax payers money that it should be allocated objectively and priority be given to people in need," he added.

Zimbabwe is on the verge of yet another drought spell, and the EU has identified 7.7 million people, just about half the size of the entire population at risk of facing hunger.

U.S. Extends Sanctions on Zimbabwe Over 'Persecution of Critics'
Tagged:
Copyright © 2020 263Chat. All rights reserved. Distributed by AllAfrica Global Media (allAfrica.com). To contact the copyright holder directly for corrections — or for permission to republish or make other authorized use of this material, click here.