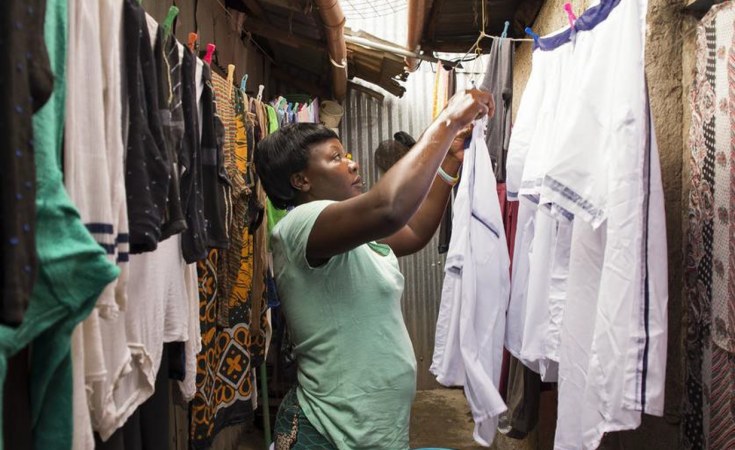 Katie G. Nelson/Oxfam (2017)
Clarice Akinyi washes clothes in Mashimoni village, Nairobi, Kenya. Clarice is proud to be a domestic worker but was frustrated and angry at the bad treatment by employers. Clarice is now an active member of the Wezesha Jamii project, in which women work together to support each other and improve their community.
Oxfam International (Oxford)
press release

Davos — The world's 2,153 billionaires have more wealth than the 4.6 billion people who make up 60 percent of the planet's population, reveals a new report from Oxfam today ahead of the World Economic Forum (WEF) in Davos, Switzerland

Global inequality is shockingly entrenched and vast and the number of billionaires has doubled in the last decade. Oxfam India CEO Amitabh Behar, who is in Davos to represent the Oxfam confederation this year said: "The gap between rich and poor can't be resolved without deliberate inequality-busting policies, and too few governments are committed to these."

Oxfam's report, 'Time to Care', shows how our sexist economies are fuelling the inequality crisis —enabling a wealthy elite to accumulate vast fortunes at the expense of ordinary people and particularly poor women and girls:

"Our broken economies are lining the pockets of billionaires and big business at the expense of ordinary men and women. No wonder people are starting to question whether billionaires should even exist," Behar said.

"Women and girls are among those who benefit least from today's economic system. They spend billions of hours cooking, cleaning and caring for children and the elderly. Unpaid care work is the 'hidden engine' that keeps the wheels of our economies, businesses and societies moving. It is driven by women who often have little time to get an education, earn a decent living or have a say in how our societies are run, and who are therefore trapped at the bottom of the economy," added Behar.

Women do more than three-quarters of all unpaid care work. They often have to work reduced hours or drop out of the workforce because of their care workload. Across the globe, 42 percent of women of working age cannot get jobs because they are responsible for all the caregiving, compared to just six percent of men.

The pressure on carers, both unpaid and paid, is set to grow in the coming decade as the global population grows and age. An estimated 2.3 billion people will be in need of care by 2030 —an increase of 200 million since 2015. Climate change could worsen the looming global care crisis —by 2025, up to 2.4 billion people will live in areas without enough water, and women and girls will have to walk even longer distances to fetch it.

The report shows governments are massively under-taxing the wealthiest individuals and corporations and failing to collect revenues that could help lift the responsibility of care from women and tackle poverty and inequality.

At the same time, governments are underfunding vital public services and infrastructure that could help reduce women and girls' workload. For example, investments in water and sanitation, electricity, childcare, healthcare could free up women's time and improve their quality of life. For example, providing access to an improved water source could save women in parts of Zimbabwe up to four hours of work a day, or two months a year.

"Governments created the inequality crisis —they must act now to end it. They must ensure corporations and wealthy individuals pay their fair share of tax and increase investment in public services and infrastructure. They must pass laws to tackle the huge amount of care work done by women and girls, and ensure that people who do some of the most important jobs in our society —caring for our parents, our children and the most vulnerable— are paid a living wage. Governments must prioritize care as being as important as all other sectors in order to build more human economies that work for everyone, not just a fortunate few," said Behar.

Download 'Time to Care', a methodology document outlining how Oxfam calculated the statistics in the report and the dataset.

Oxfam's calculations are based on the most up-to-date and comprehensive data sources available. Figures on the share of wealth come from the Credit Suisse Research Institute's Global Wealth Databook 2019. Figures on the very richest in society come from Forbes' 2019 Billionaires List. Billionaire wealth fell in the last year but has since recovered.

Oxfam is part of the Fight Inequality Alliance, a growing global coalition of civil society organizations and activists that will be holding events from 18-25 January in 30 countries, including India, Kenya, Mexico, Pakistan, South Africa, Uganda and the UK, to promote solutions to inequality and demand that economies work for everyone.

Africa's 3 Richest Men Have More Wealth Than Poorest 650 Million
Tagged:
Copyright © 2020 Oxfam International. All rights reserved. Distributed by AllAfrica Global Media (allAfrica.com). To contact the copyright holder directly for corrections — or for permission to republish or make other authorized use of this material, click here.

If He Hits You, He Loves You - Zimbabwe Tackles Myths & Violence
Corruption