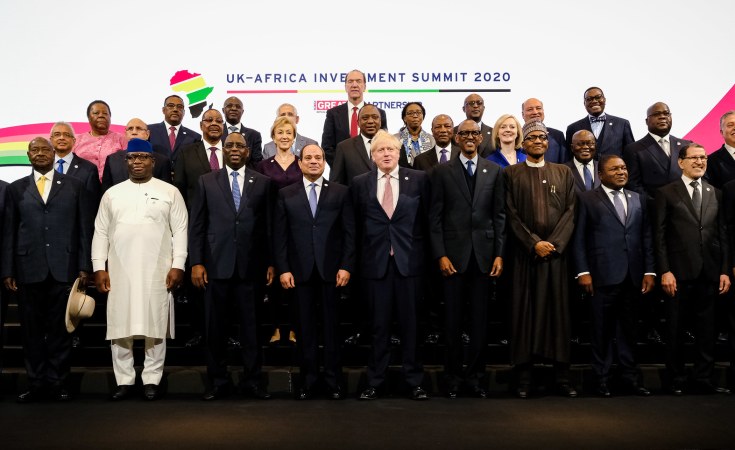 President Muhammadu Buhari has sought the cooperation of the National Crime Agency of the United Kingdom in the investigation of fugitives from Nigeria finding accommodation in that country.

Femi Adesina, the president's Special Adviser on Media and Publicity, in a statement in Abuja, said the Nigerian leader made the call during a bilateral meeting with Prime Minister Boris Johnson in London on Monday.

The two leaders met on the sidelines of the UK-Africa Investment Summit 2020.

Mr Buhari said the ongoing anti-corruption war in Nigeria, though slow but painstaking, needed the cooperation of the Agency.

News Agency of Nigeria (NAN) reports that former Minister of Petroleum, Diezani Alison-Madueke and other Nigerian fugitives in the UK had fled into exile since 2015 when the current administration of Mr Buhari came on board.

It would be recalled that in 2017, a Federal High Court in Lagos, presided over by Justice Abdulazeez Anka, had ordered the final forfeiture of N7.6 billion alleged loot recovered by the Economic and Financial Crimes Commission (EFCC) from Alison-Madueke.

He told Mr Johnson of strides in agriculture, leading almost to self-sufficiency in rice and other grains, which is saving the country billions in foreign exchange, which are now deployed to other areas of development.

On the war against insurgency, the president said things were a lot better, with the disabuse of the minds of the people on the true philosophy of Boko Haram.

He said though there were challenges in the area of resettling displaced people, it was being tackled head-on.

"We have a long history with the British military, and we are collaborating," Mr Buhari added.

On Climate change, the president said it was a challenge to Nigeria and neighbouring African countries, especially with the shrinkage of Lake Chad.

He also said the country was making progress on education, particularly that of the girl child.

In his remarks, Mr Johnson thanked Mr Buhari for being "a regional leader who gives strong encouragement to the West."

He congratulated him on jobs being created through agriculture and urged him to do more.

He equally lauded the Nigerian president for what he called the "social and economic benefits" that had accrued to the country since 2015.

Mr Johnson pledged that the necessary hand of fellowship would be extended to Nigeria on its war against corruption, through the National Crime Agency.

He pledged to cooperate with Nigeria and other African countries in the inter-basin water transfer, which could solve the Lake Chad problem, and enhance security in the sub-region.

On the Commonwealth Free Trade Area, the prime minister applauded the idea and pledged a careful consideration.

He charged the Nigerian leader to keep the national autonomy of his country intact, noting that in the future, Nigeria would not just be a continental power but an international power.