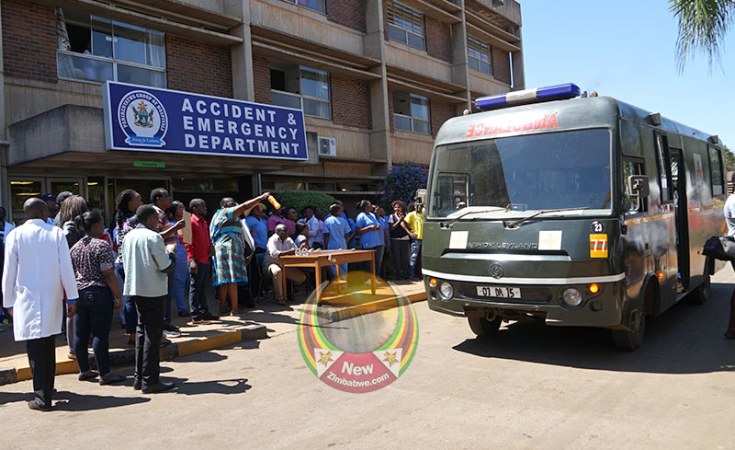 Senior doctors, who have been providing limited services and attending to emergency cases only since December, have returned to work full-time and up-scaled their services to include numerous urgent cases.

This means the doctors will be more visible than they were in recent months in terms of service provision at public health institutions like Parirenyatwa Group of Hospitals, Sally Mugabe (formerly Harare Central), Mpilo and Gweru General hospitals.

In cases where required drugs and sundries would be unavailable, patients would be required to buy whatever would be needed from private pharmacies.

Surgeries and other procedures requiring sophisticated equipment remain suspended until the said equipment is made available.

This comes at a time the Government was undertaking measures to equip all public hospitals with appropriate equipment.

The doctors' return follows a meeting between the Senior Hospital Doctors Association (SHDA) executive and its constituency on Monday from which they agreed to return to work.

The executive had initially met with Acting President Constantino Chiwenga last Wednesday where the Government reportedly committed to deal with challenges bedevilling the health sector from a "holistic approach".

This holistic approach requires provision and consistent supply of medical drugs and sundries, equipment, as well as better salaries for all health workers for a complete and functional healthcare system.

In recent months, the Government -- through Natpharm (Pvt) Ltd and other partners -- has been restocking the national drug and sundries requirements.

The Ministry of Health and Child Care set up a technical committee to coordinate the process of hospital equipment procurement.

In a statement released after Monday's meeting, SHDA said following their assessment of the state of hospital equipment and national drugs restocking exercise, they resolved to upscale the level of services they will be providing to patients seeking treatment from public health institutions.

"On 15 January 2020, the SHDA executive met the Acting President Honourable CDGN Chiwenga and deliberated on the issues bedevilling the health delivery system of the nation. The Acting President expressed his commitment to a holistic approach to handling the situation.

"In a meeting of the members of the SHDA on 20 January 2020, members agreed to upscale from only offering emergency services to include urgent cases which could not be assisted all along based on assessments done by their executive," said SHDA.

The association said its members' decision was triggered by the need to ease the plight of patients.

SHDA expressed concern over the implementation of the nurses' flexible working hours, which they claimed was compromising patient care, hence the need to only focus on "urgent and emergency" cases to limit on admissions.

The nurses' flexible working hours are a Government directive allowing nurses to work long hours thrice a week from 7am to 7pm.

The normal nursing shift starts from 7am to 4pm for five days a week.

Although a visit to central hospitals in Harare yesterday did not show much difference in terms of service provision, patients interviewed expressed hope that they would be attended to.

Scores of patients, a majority of whom needed specialist services, could be seen waiting for the resumption of services offered by consultants.

Mr Crayton Bhisenti (38) who was involved in a traffic accident last year said he was forced out of hospital because of the doctors' strike.

Mr Bhisenti, who was waiting to get treatment from Parirenyatwa Hospital said his condition was so bad that one of the bones below the knee was protruding.

Mrs Magareth Chandida who travelled from Banket and required the services of a neurosurgeon said she was hopeful she would get assistance at Sally Mugabe Hospital.

"I came here today because that is the review date I was given. If the doctor was not there to attend to us, the nurses could have sent us back as they used to do previously, but today they said we should wait because the doctor said he was coming," said Mrs Chandida.

Although most junior doctors returned to work in December, their seniors were only attending to emergency services making complete normalisation of healthcare delivery difficult.

In most cases, junior doctors require the presence of senior doctors for the system to work efficiently.

Meanwhile, the Zimbabwe Hospital Doctors Association (ZHDA) commended Higher Life Foundation for its further commitment to financially support all doctors and urged all of them to apply.

"In light of the recent developments, the ZHDA wants to extend its gratitude to the HLF for extending its offer once again to all Government doctors.

"The ZHDA is encouraging its entire membership to go and apply for the training fellowship before the stipulated deadlines," said ZHDA in a statement.

HLF has reopened its fellowships to all doctors including middle and consultant doctors in Government health facilities with immediate effect.

HLF chief executive officer Mr Kennedy Mubaiwa said the latest development, which will run for the next six months, will see senior consultants getting a monthly subsistence allowance of $10 000 and $7 500 for other senior doctors including provincial medical directors and middle level doctors.

Junior doctors will continue getting $5 000 per month.

Doctors Reject Zimbabwe President's Offer, Masiyiwa Money
Tagged:
Copyright © 2020 The Herald. All rights reserved. Distributed by AllAfrica Global Media (allAfrica.com). To contact the copyright holder directly for corrections — or for permission to republish or make other authorized use of this material, click here.