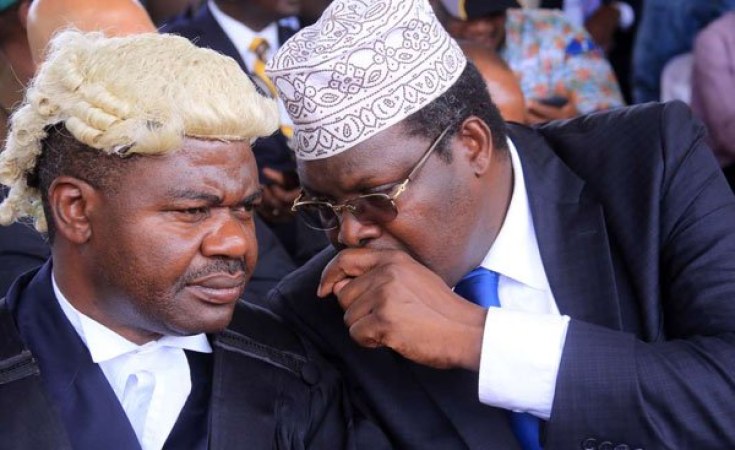 Exiled Lawyer Miguna Miguna has penned a moving tribute to his late father-in-law after missing the burial which was to be held today.

Miguna's effort to return to Kenya and attend the burial of his father-in-law Benson Awange ran into headwinds after the government issued a red alert to all airlines not to fly him to Nairobi or any other African country. Miguna later returned to Canada.

"Having waited for President Uhuru Kenyatta and his appointees at the ministries of Interior and Immigration to obey court orders and revoke their illegal "red alerts" to no avail, I've no option but to return to exile in Canada. I'll not surrender. The struggle continues. Viva!" he tweeted on Tuesday.

Miguna in his tribute mentioned he had a good relationship with his father-in-law but apologised for not speaking to him on January 1, 2020.

"I apologise to Jaduong' na Omolo Awange for me not having the raw power to attend the funeral by force. But I am here with you in spirit. When I had announced my intention to fly to Kenya in December 15, 2019, Jaduong' Omolo Awange was still alive and healthy. Hours before the day of his passing, on January 1, 2020, Mzee Omolo Awange had informed us that he was feeling okay," said Miguna.

"I apologise for him for not having spoken with him for an extended period of time. The day before he passed on, my lovely wife Jane had telephoned and spoken with him. My folly was to arrange to speak with him the next day, being January 2nd instead of January 1st."

According to Miguna, his father-in-law loved reading books and was able to read all his books.

"Mzee Omolo Awange like me, he loved reading. He read and analysed all the three national circulating newspapers in Kenya on a daily basis. He also closely scrutinized the week-end newspapers. He would frequently send me short text messages enquiring of my thoughts and opinion regarding various news reports and published commentaries. He was a voracious reader of books too. Occasionally, he asked me to send him copies of rare books that mostly had gone out of print in Kenya but were still available abroad, books about philosophy, politics and human relations. Mzee Omolo Awange read all my published books, newspapers, commentaries and closely followed all my social media engagements. He was a political, social and economic connoisseur. An organic intellectual," wrote Miguna.