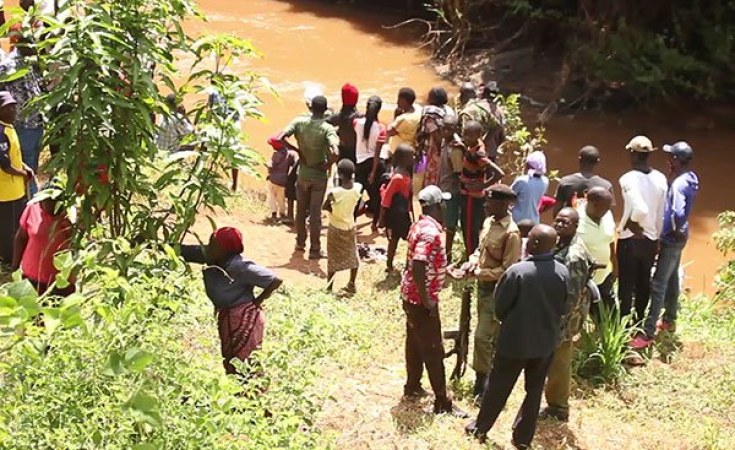 Photo: Ndung'u Gachane/Daily Nation
Residents wait in hope as divers search for bodies of two children who drowned in Thika River on January 20, 2020.
The Nation (Nairobi)
By Ndung'u Gachane

An alarm has been raised over the rising cases of drownings in Murang'a County with at least 15 people having died over the past three months while swimming in various rivers.

Most of the victims have been children.

Efforts by the county's disaster management to retrieve five of the bodies are yet to bear fruit.

Bodies of three of those who lost their lives were retrieved on Tuesday after drowning in River Mukungai two days earlier.

They were all pupils of Weithaga Primary School who had gone on a swimming expedition.

Another two bodies were also recovered from Thika River on Tuesday.

Murang'a County Head of Disaster Management Bilha Wanjiku told the Nation that her team has not been able to retrieve the body of a boy who drowned in November last year in Mukungai River.

It is in the same river that 11 people have lost their lives in swimming expeditions.

"When he drowned, the river was full to capacity and, in fact, we left our retrieval equipment there," Ms Wanjiku said.

Residents have called on the Murang'a County government to train more divers to deal with the drownings that are now worrying them.

They also want bush along the banks of the rivers, especially at the killer spots cleared.

Further, they have asked Governor Mwangi Wa Iria's administration to put up clear warning signs to deter people from swimming near water falls.

They also want the killer spots fenced off to keep off those visiting the places.

A number of those who have drowned often turn out to people from other places who visit their relatives and decide to go swimming without knowing the dangers the rivers pose.

"Many lives have been lost at the Mukungai water fall and at the Thika River. Most of those who drown are usually strangers who come to visit their relatives and are attracted by the flowing water and decide to swim," said Mr Joseph Karanja, a resident.