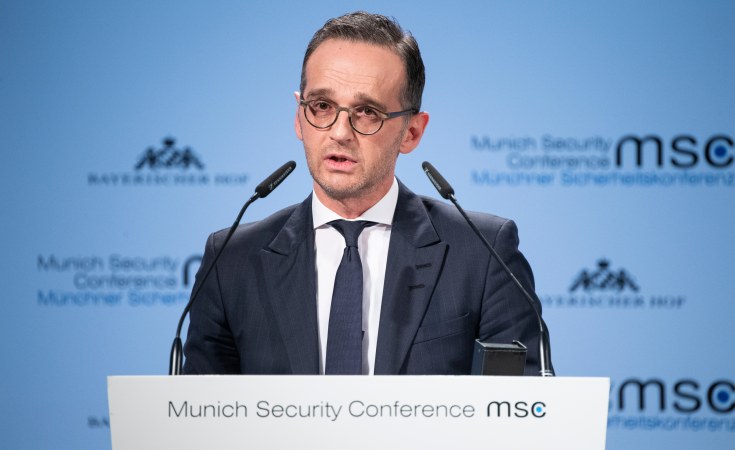 The German foreign minister has called for collective efforts to ending the conflict, saying Libya's neighbors "also suffer from this civil war." Algerian officials have sought to position Algiers as a key mediator.

German Foreign Minister Heiko Maas on Thursday urged Libya's neighbors to support efforts to end a nearly decade-long conflict in the North African country, during a high-profile meeting in the Algerian capital Algiers.

"It is Libya's neighboring states that also suffer from this civil war," Maas said. "For this reason, they are particularly important for us in finding solutions."

At the meeting, Maas briefed representatives from Tunisia, Algeria, Niger, Sudan and Egypt on the Berlin process, which brought together warring factions and world leaders to negotiate steps towards a political solution to the conflict.

But Algerian Foreign Minister Sabri Boukadoum said his government is "confident that Libyans can reach peace."

"The current situation in Libya cannot withstand an escalation," said Boukadoum. Libya's neighbors have a responsibility to "put an end to the bloody clashes and avoid leading the country towards the unknown."

The foreign minister's statement came a day after Algerian President Abdelmadjid Tebboune said Libyan factions had made statements that "indicate that the only power capable of settling the problem is Algeria."

Algeria shares a border with Libya that stretches nearly 1,000 kilometers (620 miles) from the Mediterranean to the Sahara.

Maas is due in Tunisia after the Algeria meeting. He is scheduled to discuss the Libyan conflict with Tunisian President Kais Saied during his trip.

No end in sight

Libya plunged into chaos in 2011 after dictator Muammar Gaddafi launched a brutal crackdown against anti-government protesters. NATO-backed rebels eventually defeated the regime and captured Gaddafi, who was killed in captivity.

Since then, warring factions have fought a bitter war to maintain power in the North African country. Over the past two months, Russian mercenaries and Turkish troops have been deployed on opposing sides of the conflict, representing a major escalation in the conflict.

The UN-backed government in Tripoli has been under attack since last April by forces loyal to Haftar. The latest escalation has killed more than 280 civilians and 2,000 fighters, and displaced 146,000 Libyans, according to UN figures.

2019 Attack on Libyan Migrant Centre May Be A War Crime - UN
Tagged:
Copyright © 2020 Deutsche Welle. All rights reserved. Distributed by AllAfrica Global Media (allAfrica.com). To contact the copyright holder directly for corrections — or for permission to republish or make other authorized use of this material, click here.