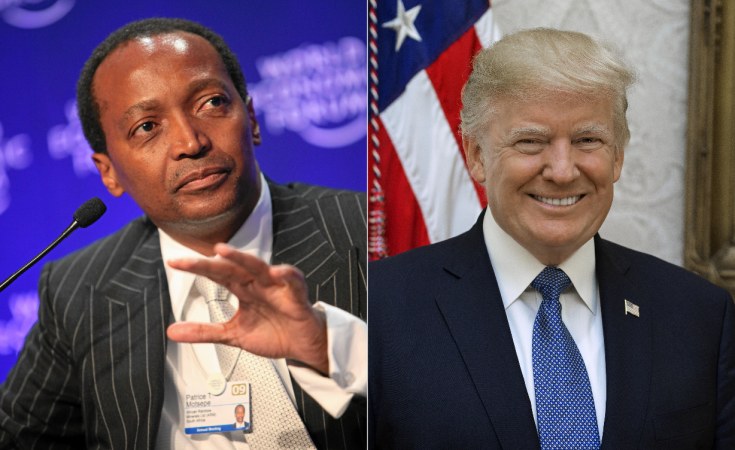 The African Rainbow Minerals CEO's comment was caught on camera at the World Economic Forum in Davos on Thursday. Motsepe said: "… And all we wanted to say is that Africa loves America, Africa loves you. It's very, very important. We want America to do well, we want you to do well. The success of America is the success of the rest of the world."

Twitter users had no shortage of hot takes on the matter. Several tweets on the trending topic read:

@BlackCulture_HM - Aowa Patrice Motsepe who send to go tell @realDonaldTrump that Afrika love him? Which Afrika? Please papa count me out if your sibara send you to say this he is completely lost Afrika does not love killers

@unclescrooch - Patrice Motsepe doing everything he can to make sure Africa is never involved in World War 3! I stan

@Dikgale_Mahlodi - Disclaimer: the views of Mr Patrice Motsepe on Africa loving Donald Trump are his, and his alone

@Thabiso16721931 - Motsepe is not operating in our level guys, this guy is international and understand business and politics more than us and trump combined, thats why he is wealthy. You need brains to understand what Motsepe is doing, a man is way intelligent guys just watch and learn.

@Nathi_MfokaJobe - In the absence of a President in this country we now have Patrice Motsepe addressing the world on our behalf, lying about how we love racists like Donald Trump, how did we get ourselves here?

@_AfricanSoil - What Motsepe did was uncalled for; you can't go anywhere in the world and speak on half of an entire continent. Every country has its own President & international relations representatives that can speak for themselves. His utterances are dangerous and very irresponsible

Trump Extends U.S. Sanctions Against Zimbabwe
Tagged:
Copyright © 2020 allAfrica.com. All rights reserved. Distributed by AllAfrica Global Media (allAfrica.com). To contact the copyright holder directly for corrections — or for permission to republish or make other authorized use of this material, click here.