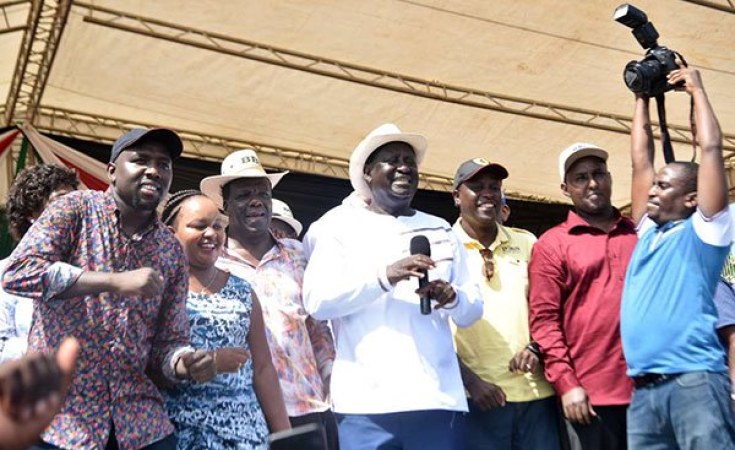 The architects of the peace deal, President Uhuru Kenyatta and opposition leader Raila Odinga, will be sharing a podium in the US on February 5 to tell their "personal journey of faith and reconciliation" during the International Lunch in Washington, DC.

The International Lunch will take place a day before the annual US National Prayer Breakfast, to which President Kenyatta and Mr Odinga have also been invited, according to a letter of invitation that the Sunday Nation has seen.

President Donald Trump and First Lady Melania Trump will be the guests of honour at the National Prayer Breakfast.

The International Lunch is one of the annual National Prayer Breakfast-related events and honours members of the Diplomatic Corps based in the US.

President Kenyatta and Mr Odinga will be the joint keynote speakers for the lunch, according to an invitation from the US Congress' National Prayer Breakfast co-chairs, John Moolenaar and Thomas R. Suozzi.

In the invitation, the co-chairs ask Mr Odinga and President Kenyatta to "consider speaking at the International Lunch on Wednesday February 5, 2020, at 12.30pm".

"As the keynote speakers for the lunch, we would like to ask you to share your personal journey of faith and reconciliation."

Mr Odinga had made reference to himself and President Kenyatta meeting in the US during a public rally at Bukhungu Stadium in Kakamega last Saturday to drum up support for BBI.

"The handshake has got many people talking. I was recently invited to Togo to help them find a way to work together with the opposition in that country. This time around, President Kenyatta and I have been invited to Washington, DC, in February to the National Prayer Breakfast so that we can tell them more about the handshake, because it is a unique thing," Mr Odinga said.

It is still not clear if President Kenyatta and Mr Odinga will travel together to Washington or just link up there.

State House spokesperson Kanze Dena gave a "No comment" response to the Sunday Nation on the significance of the two handshake architects taking their reconciliation message across borders to the US. Mr Odinga's office and the US Embassy in Nairobi did not respond.

The US has been a great supporter of the handshake and, according to ANC party leader Musalia Mudavadi in his biography, Washington was instrumental in having President Kenyatta and Mr Odinga announce the unity pact through carrot-and-stick diplomacy.

The day of the handshake in March 2018 coincided with the arrival in Nairobi of then US Secretary of State Rex Tillerson.

At a press conference later in the afternoon, Mr Tillerson announced that "the United States looks forward to supporting the process that was announced ... to bring the country together and to address the various national divisions".

The invitation to the two leaders comes at a time when there is acrimony between political leaders allied to President Kenyatta and Mr Odinga on the one hand and those allied to Deputy President William Ruto on the other.

The deputy president had initially opposed the public rallies organised by allies of the President and Mr Odinga to popularise the Building Bridges Initiative (BBI) report, terming them a waste of public resources.

However, ahead of another BBI rally on Saturday in Mombasa, Dr Ruto's allies announced that they would join the rallies.

"After consultations as leaders, we have decided that in order to pursue the original spirit of the BBI irrespective of our concerns against the use of public resources in a process that has been blessed with full nationwide consensus, we will participate and, where necessary, take charge of these public rallies," the Senate Majority Leader and a confidante of Dr Ruto, Kipchumba Murkomen, said.

In an interview with the Nation on Friday, Dr Ruto had been cagey over whether he would attend the Mombasa rally.

"It is not anybody's business to invite me to Mombasa or compel me not to go. I will have consultations with my boss (Uhuru Kenyatta) and we will agree on the attendance of the meeting or subsequent ones," he said in the interview.

He also accused Mr Odinga and ODM of hijacking the BBI process to start planning for 2022 General Election.

"There are people who have arrogated themselves the role of chaperons to be inviting people there. Who gave them that responsibility? We are neither guests, refugees nor visitors in Kenya to be ushered in and out by anybody. BBI must give space to ordinary Kenyans to give their views on how to move forward," he said.

Previous Story
Kenyatta and Odinga to Attend U.S. National Prayer Breakfast, Thanks to the Handshake
Next Story

Kenyatta and Odinga to Attend U.S. National Prayer Breakfast, Thanks to the Handshake

Kenya Plans Iran Tea Mission as U.S. Row Rages
Tagged:
Copyright © 2020 The Nation. All rights reserved. Distributed by AllAfrica Global Media (allAfrica.com). To contact the copyright holder directly for corrections — or for permission to republish or make other authorized use of this material, click here.