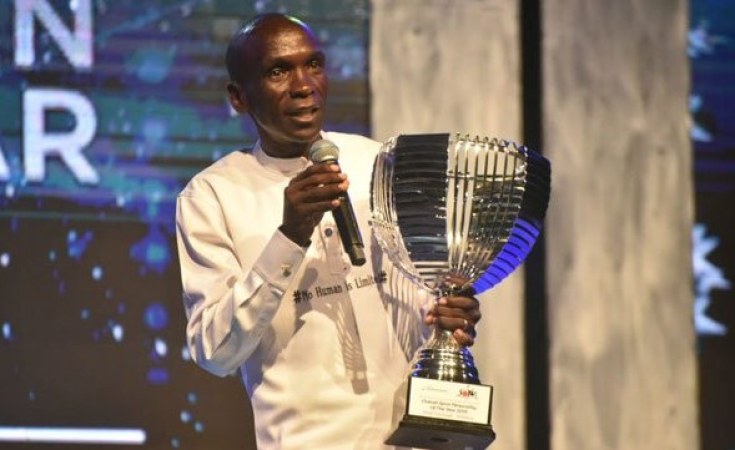 Kevin Odit/Daily Nation
Eliud Kipchoge speaks after he was crowned the Sports personality of the Year at the Soya gala in Mombasa on January 24.
The Nation (Nairobi)
By Japheth Mutinda and Philip Onyango

Eliud Kipchoge, the greatest marathon runner of all time, is Kenya's Sports Personality of the Year.

"Sports is only way to unite the country and the whole world. My goal and dream is to make running a lifestyle event in the country since when you run you stay healthy," Kipchoge said to a rapturous applause form the crowd. "Sports is where unity is hence let us be at war with our negatives and at peace with everyone."

"Sports is where freedom is."

Kipchoge started the year with victory in the London Marathon in a course record of 2:02:37. Then on October 12 last year, he became the first man to run a marathon in under two hours when he clocked 1:59:40 in the Ineos 1:59 Challenge in Vienna, Austria. He retained the World Athletes Athlete of the Year Award. Cheruiyot claimed his maiden World 1,500m title in Doha a few weeks after retaining his Diamond League trophy.

Kamworor set a new World Half Marathon record at the Copenhagen Half Marathon, winning the race in 58:01. Kamworor also won bronze at the World Cross Country Championships and the New York City Marathon.

Malkia Strikers coach Paul Bitok was named the Coach of the Year after guiding the African queens to the African Games gold and also helping them return to the Olympics after a 16-year hiatus.

Malkia Strikers, winners of the 2019 African Games gold, were named the Team of the Year women. Kenya Lionesses were second in the category after making it to the Tokyo Olympics while Harambee Starlets was the third best team.

Kenyan Premier League side Bandari SC were third best team in the men's category while Kenya Morans were the runners up. Kenya Commercial Bank's rugby team was named the Team of the Year after successfully retaining the Kenya Cup for the third straight year.

The School Coach of the Year award went to Kwanthanze Girls' Justin Kigware who guided his charges in retaining their national and East African games titles last year.

Kenya Special Olympics Federation was named the Sports Federation of the Year, beating Athletics Kenya and Kenya Motorsport Federation to the award.

Swimming sensation MariaH Bianci was named the Most Outstanding Player in the girls category while the boys' award went to another swimmer Stephen Ndegwa (Aga Khan Academy Mombasa).

Sports Personality of the Year

Sportsman of the Year

Sportswoman of the Year

Coach of the Year

Sportsman Living with a Disability

Sports Woman Living with a Disability

Sports Federation of the Year

School Team of the Year (Boys)

School team of the Year (Girls)