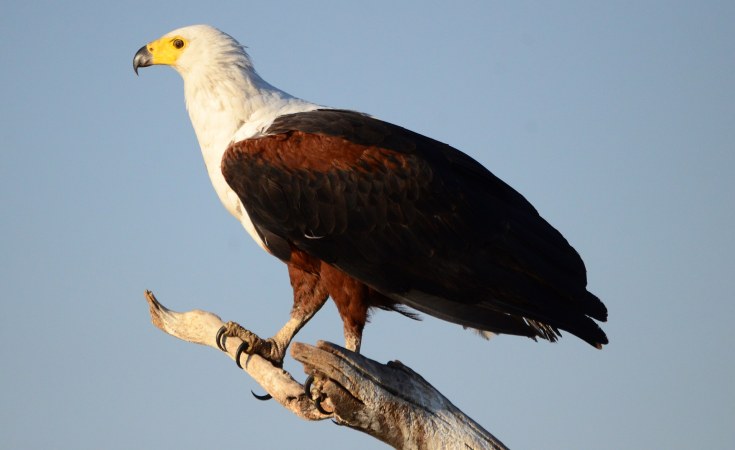 The migratory Osprey bird, which flew more than 6,000 kilometres from Finland to Kenya last Thursday, has died.

The bird was fished out of the waters of Lake Kanyaboli after flying 6,948 kilometres and landing at Usalu Village in West Yimbo Location of Bondo Sub-county in Siaya County.

After one Mr Walter Oloo reported the sighting at the office of Kenya Wildlife Service (KWS) in Siaya, the bird was taken to the KWS Veterinary Department in Nairobi and later moved to the Raptor Rehabilitation Centre in Karen.

"We regret to announce the death of the bird despite all efforts to rehabilitate and eventually release it back to the wild," he said, noting it was in the care of KWS veterinarians at the time.

"We were feeding and treating it back to good health with a plan to release it back at the exact site where it was rescued in the Lake Victoria catchment so it would not lose it's bearing on the epic return flight northwards early in March."

Mr Udoto said the bird was weak, had been severely dehydrated and emaciated from the long flight by the time it was being transferred to Nairobi.

He also said it suffered minor injuries while trapped by the fishing net.

Mr Udodo said a postmortem found the bird died due to systematic organ failure as a result of long term starvation.

The Osprey, scientifically known as Pandion haliaetus, is also referred to as a sea hawk or a river hawk.

Nature Kenya and the Yala Ecosystem Site Support Group (YESSG) were behind the bird's rescue.

The YESSG, through chairman Mr Ayiro Lwala of Yimbo Usenge wrote about the discovery on the group's page after getting in touch with the rescuer.

A tag on the bird's leg showed it was ringed in Finland at the Museum Zool in Helsinki.

KWS said Finland informed it that the bird was was ringed in June 2017 and that it was mature enough for breeding.

The area around lake Kanyaboli, a 1000-hectare oxbow lake which is the second largest in Africa, has been classified and recognised internationally as one of Kenya's 60 important bird and biodiversity areas (IBA).

Scientists have marked it as an ornithological paradise, a real pear for tourism.

Mr Lwala said, however, that despite being declared an IBA and having unique birds not found elsewhere in the world, the lake's potential is yet to be fully exploited .

"The area has rare birds such as the papyrus yellow warbler, which is only found in Yala Swamp," he said

There is also the papyrus gonoleck, which is not found elsewhere in the world .

Bird migrate to and form the area for reasons including weather conditions and shrinking wetlands.

"There are species that only live in the wetlands and because they are endangered, we have embarked on conservation targeting the papyrus yellow warbler, the gonoleck and others," Mr Lwala said.

The official further noted that farmers and corporate entities have encroached on the swamp, destroying the birds' natural habitat.

As such, YESSG has partnered with the KWS and Siaya County to educate the people on the importance of the habitat and how to rehabilitate it.

"We are encouraging the people to adopt best land use plans," said the chair, who is pioneering one such plan for Yala Swamp.

Mr Lwala said the Yala Swamp Advisory Committee has been established, in collaboration with the county and with advise from the national government, to develop the plan

The plan entails demarcating the area to clearly set aside pieces for agriculture, business, settlement and conservation.

According to the conservationist, Siaya has not tapped into the full potential of its tourism sector despite having some of the best spots for varied use.

Mr Lwala said that bird watching, for instance, is mainly by tourists.

"We receive several inquiries but birdwatching as an enterprise is not yet well developed here," he said.

He added, "We don't have an active presence on social media and the internet, and there are no structures on best practices, so the challenges outweigh the potential."

To promote tourist, activities, the group has trained 20 youths as tour guides.

"They earn whenever they receive guests and make contributions to organisations affiliated with them for conservation efforts," he said.