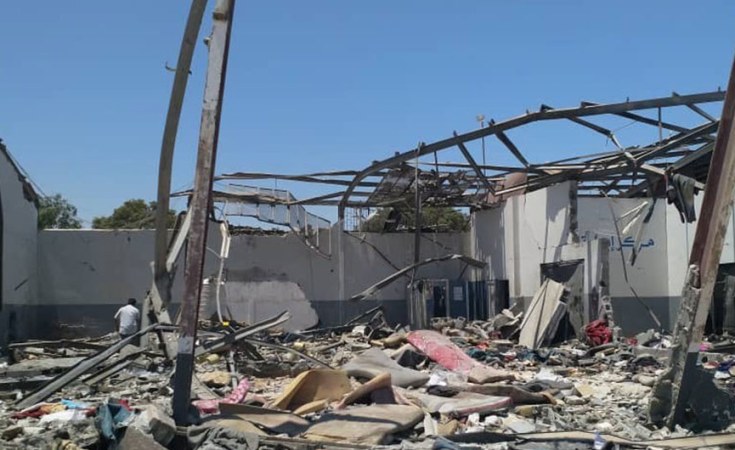 Georg Friedrich/UNSMIL
The aftermath of the devastating airstrike on the Tajoura Detention Centre, in the suburbs of the Libyan capital, Tripoli, on 2 July, 2019.
UN News Service

Warring parties in Libya, as well as foreign governments supporting them, are being urged to investigate deadly airstrikes last July which killed at least 53 migrants and refugees at a detention centre in the northwest of the country.

The appeal was made by the UN Support Mission in Libya (UNSMIL) and the UN human rights office in Geneva, which on Monday published a joint report calling for accountability for the attack targeting the Daman building complex, which houses the detention centre.

"As I have said previously, the Tajoura attack, depending on the precise circumstances, may amount to a war crime," said Michelle Bachelet, the UN High Commissioner for Human Rights.

"Libyans, migrants and refugees are trapped amid violence and atrocities that are in turn fuelled by impunity. Those guilty of crimes under international law must be held to account."

'Tragic example' of use of air power

The Daman complex is in Tajoura, a town in the Tripoli district in north-western Libya, and comprises various facilities belonging to the Government of National Accord (GNA).

The UN-backed administration is battling the so-called Libyan National Army (LNA), which is aligned with a rival government in Benghazi, located in the east.

Fighting between the two sides intensified in April 2019, after the LNA laid siege to southern Tripoli.

The attack on the Daman complex occurred on 2 July 2019 when an "air-delivered bomb" struck a vehicle repair workshop there operated by the Daman Brigade, an armed group allied with the GNA, according to the report.

Minutes later, a second airstrike hit the Tajoura Detention Centre, a large hangar which at the time held some 616 migrants and refugees. Three sections of the building were impacted.

One of the sections, which housed 126 people, sustained a direct hit. Forty-seven men and six boys were killed, and 87 other male migrants and refugees were injured.

It was one of the deadliest incidents since the start of the new round of hostilities in April.

Regardless, international humanitarian law still applied. The report recalled that parties to the conflict knew the precise location and coordinates of the detention centre, which had suffered a previous hit just months before.

Airstrikes behind most civilian casualties

"The July 2019 attack at Tajoura is a tragic example of how the use of air power has become a dominant feature in Libya's civil conflict, and of the dangers and direct consequences on civilians of foreign interference", said UNSMIL chief Ghassan Salamé.

"This is why the commitments made in Berlin on 19 January to end such interference and uphold the UN arms embargo must take hold."

The international community met in the German capital last Sunday in efforts to find a political solution to end the Libya crisis, which has seen increasing foreign interference.

The UN joint report found at least 287 civilians were killed and around 369 others injured last year alone, with airstrikes accounting for 60 per cent of those casualties.

The situation shows no sign of abating as UNSMIL on Monday condemned a missile attack against Mitiga Airport, near Tripoli's centre. At least two civilians were injured, while the tarmac and several buildings were damaged.

"UNSMIL reiterates that attacks against civilian targets, especially public facilities, represent a blatant violation of International Humanitarian Law, and that repeated attacks against Mitiga Airport deprived two million residents in the capital of their only functioning airport," the mission said in a statement posted on Twitter.