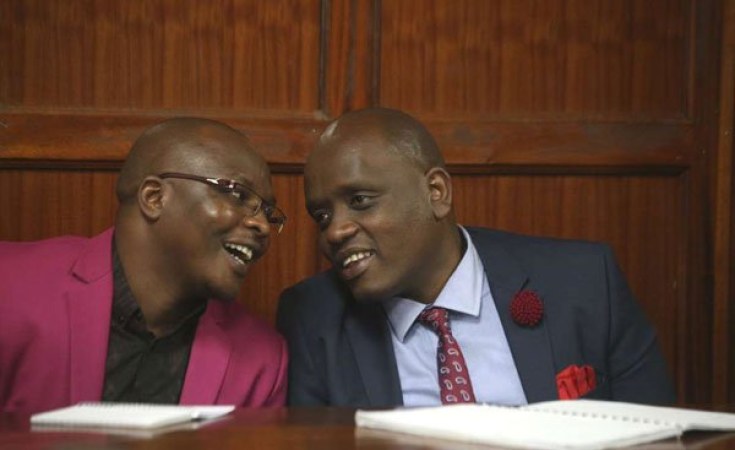 The source of a letter that 'exposed' plot to assassinate Deputy President William Ruto remains unknown, a Nairobi court heard on Tuesday.

The lead investigator Chief Inspector Peter Maina on Tuesday told court that a forensic audit of the document failed to establish when the fake letter first emerged.

While testifying against Secretary of Digital Media at State House Dennis Itumbi and Mr Samuel Gateri, the investigator also confirmed to court that the forensic analysis was unable to trace originator of the letter.

The 20-pages forensic report produced in court as exhibit by the prosecution did not indicate when the image of the letter was first posted in a WhatsApp group named Tangatanga Movement.

"The forensic audit was to find the originator and author of the letter," Mr Maina told Milimani Chief Magistrate Martha Mutuku.

He added that the investigations on the controversial document that went viral on social media was conducted by four officers.

Mr Maina assembled the team following an instruction by the Director of Criminal Investigations (DCI) George Kinoti, who had subsequently been instructed by President Uhuru Kenyatta to probe the assassination claims as well as the letter.

While being cross-examined by Mr Itumbi's lawyer Katwa Kigen, the police chief said the forensic study concluded that Mr Itumbi's mobile phone - in terms of simcard and handset- did not have any communication concerning the letter.

It was difficult to pin Mr Itumbi, who works at the DP's office for posting the letter in the political WhatsApp group because he had reprogramed his mobile phone and deleted everything. The letter was also shared in a Kiambu County WhatsApp group.

Since WhatsApp group forums accommodate up to 256 people, the investigator told the court he only interviewed four people listed as administrators of the Tangatanga group. The investigations were never extended to the Kiambu forum.

"There is circumstantial evidence on why he deleted and reprogramed the mobile phone. He did so after the posting of the letter. This is because he knew he would be arrested," stated the witness.

The detective said the police had neither contacted nor summoned Mr Itumbi in relation to the document. Mr Kigen insisted that his client had no connection to the fake letter.

"If he needed to have deleted it, then he must have had information that police were looking for him. But the witness has confirmed police had [neither] contacted [nor] summoned him," said Mr Kigen.

The witness also denied that the complainant in the case is Interior Principal Secretary Karanja Kibicho.

He was responding to Mr Kigen's statement that a police charge-and-cautionary document had indicated the PS was the complainant.

Mr Itumbi is facing three counts involving publishing and authoring the letter but the chief investigator said forensic investigation failed to link his phone to the offence.

The court heard that Mr Gateri was to become a prosecution witness against Mr Itumbi but he (Mr Gateri) was arrested and charged after he posted the letter of Facebook.

"On interrogation of Mr Gateri, he confirmed that the letter was posted by Mr Itumbi in a WhatsApp group where he is a member. He showed police the group in his mobile phone. We proceeded to arrest Mr Itumbi and confiscated his simcard and mobile phone," said Mr Maina.

The magistrate heard that no statement was recorded from Mr Gateri despite police marking him as a State witness.

He was charged alongside Mr Itumbi after telling court that police had coerced him in signing a statement. The hearing of the case continues on Wednesday.