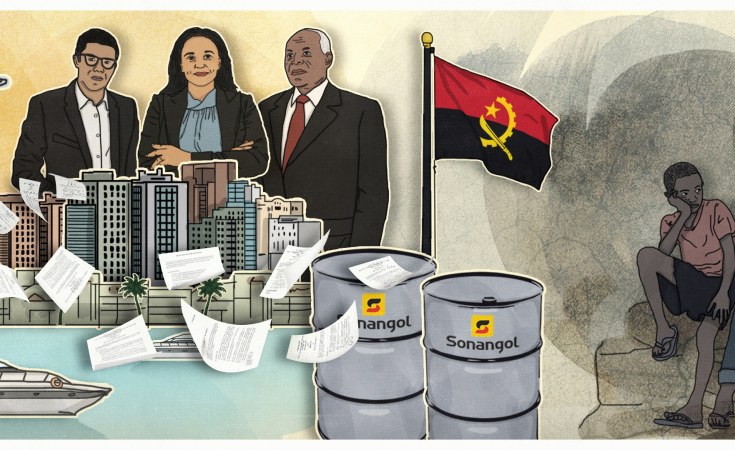 As he faces charges of misusing more than $1 billion in state funds, the husband of Angolan billionaire Isabel dos Santos defended himself by pointing to the couple’s accounting firm. Sindika Dokolo said if people do not trust his version of events, they should just ask the renowned global accounting firm PwC, which handled the couple's accounting and gave them tax advice.

"We've been working with only Triple-A partners, including our auditors ⁠— and our auditors, in this case, are PwC," said Dokolo in a recent studio interview with VOA in Washington.

Isabel dos Santos, the daughter of former Angolan President Jose Eduardo dos Santos, similarly maintains her innocence, saying she ran businesses that operated on the world stage and abided by the highest standards. "When you are a child of the president, you can't hide. The lights are just too bright. You have a lot of attention, a lot of scrutiny. So I took the decision to be transparent," she said in a Skype interview with VOA.

But PwC and other firms are now distancing themselves from the couple, who have had their assets frozen inside Angola. After the senior dos Santos left power in 2017, his successor, Joao Lourenco, announced a crackdown on corruption. Part of this effort was bringing charges against the dos Santos family, which Angola’s attorney general believes looted more than one billion dollars in state funds.

PwC, which according to The New York Times worked with at least 20 of Isabel dos Santos’ companies, has now severed ties with the couple. Bob Moritz, the chairman of PwC, said he is "personally tremendously shocked" by the allegations of misappropriation of money from Angola. He said the company is launching an internal investigation.

"I am thankful now that we are getting out of it now and we are taking the action and we will wait for the investigation to continue and then we will take necessary actions thereafter," Moritz said, speaking to the Associated Press.

Another company, U.S.-based Boston Consulting Group (BCG), helped run de Grisogono, the diamond company that Dokolo and Dos Santos purchased. The couple are accused of using Angolan public funds to finance the purchase and leaving the state with a debt topping $100 million. The New York Times reported that, although BCG’s involvement with de Grisogono lasted only 11 months, BCG employees left to become the chairman, chief financial officer and chief operating officer of the diamond company.

In response to questions about its involvement with the company, BCG stressed that it never worked directly for the dos Santos family. "BCG has never been retained by or worked directly for Isabel dos Santos or her husband at any point in time, and we will not work for them going forward," a spokesman said in a written statement to VOA.

The company is also conducting an internal investigation. "The allegations against Isabel dos Santos are obviously serious and very concerning," said the spokesman.

Another major consulting and accounting firm, McKinsey, also allegedly received payments from dos Santos-owned companies. VOA reached out to several McKinsey offices but the company did not respond.

As Isabel dos Santos and her husband face charges in Angola, critics are asking what, if any, legal action may be taken against the foreign citizens and foreign companies that worked with the couple.

Thierry Dongala is a former senior advisor to the U.S. House of Representatives' Foreign Affairs Subcommittee on Africa and Global Human Rights and closely follows issues of corruption in Africa. He said, typically, one tool used against multinational companies caught breaking the law in Africa is the Foreign Corrupt Practices Act, which makes it a crime for any U.S. citizen to pay a bribe or engage in corruption on foreign soil. This law can also be used against companies that employ U.S. citizens.

Dongala said, historically, U.S. prosecutors are selective about which cases like this they choose to pursue. "If the U.S. government wants to get involved in corruption cases, there are precedents and precedents set," he said. "I think when assets are brought into the U.S. legal system, the U.S. has grounds to get involved because, now it involves American dollars."

More recently, a new legal tool has emerged to use against non-U.S. citizens believed to be involved in corruption.

The so-called Magnitsky Act was named after a murdered Russian tax accountant and signed into law in 2012. It allows the government to impose sanctions and freeze the assets of those involved in corruption or human rights abuses. The law's range was later expanded.

Dongala worked on the implementation of global Magnitsky sanctions while working with the House. Since it became law, the act has been used against numerous people including Russian oligarchs, former Gambian President Yahya Jammeh, who is accused of embezzlement, and Saudi officials suspected of playing a role in the killing of journalist Jamal Khashoggi.

Dongala said the law was designed to be easy to implement against offenders, but for that reason, it should be used judiciously.

"That law was intentionally made that way so that it could be a powerful tool so that we would have very low legal barriers to sanctioning people," said Dongala, who founded Accountable Africa, a consulting group promoting good governance and fiscal responsibility. "So that's why we have to be very careful in the usage where we're allowing governments to use it against others. Because it could become a bullying tool for foreign governments if we don't discern that."

He also said, in general, when it comes to prosecuting corrupt leaders and their families, it is best done in courtrooms inside the countries themselves.

"For the U.S. to venture off into using Global Magnitsky, even though it has the reach to do so, I think would be at this stage uncalled for because of the domestic nature of the allegations," he said. "You don't want a sense where Africans are kind of outsourcing their ability to judge themselves."

Angola Resumes U.S.$500 Million Central Bank Theft Trial
Tagged:
Copyright © 2020 Voice of America. All rights reserved. Distributed by AllAfrica Global Media (allAfrica.com). To contact the copyright holder directly for corrections — or for permission to republish or make other authorized use of this material, click here.