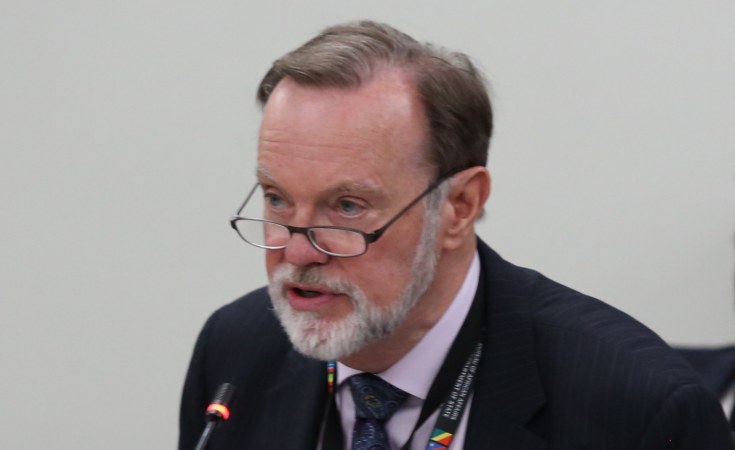 Photo: US State Department/Flickr
Assistant Secretary for Africa Tibor Nagy speaks at a breakout session on Addressing Challenges to Religious Freedom in sub-Saharan Africa at the Ministerial to Advance Religious Freedom at the U.S. Department of State in Washington D.C. on July 17, 2019.
Radio Dabanga (Amsterdam)

Khartoum — "Considerable arrears to international financial institutions", which prevent those institutions from making additional loans or grants to Sudan, is the main reason that the country is struggling to secure additional finance, according to Tibor Nagy, US Assistant Secretary of State for the Bureau of African Affairs, who is currently visiting Khartoum.

In a telephone press briefing from the Sudanese capital yesterday, Nagi fielded repeated questions regarding Sudan's continued presence on the US list of State Sponsors of Terrorism (SST), seen by many as a major impediment to Sudan's economic recovery.

"We have to remember one thing; the new government has been in power in Sudan for approximately six months. What we're talking about is not just the SST, but it's literally like peeling away an onion, because there are a number of restrictions on what we can and cannot do with Sudan.

'We see the new government of Sudan as a very positive partner, with whom we can do business... '

"Remember, these were built up literally over decades. So bottom line, we see the new government of Sudan as a very positive partner, with whom we can do business. We can sit down; we can address these issues. We have active negotiations going on in a number of areas. We are optimistic. I wish I could give you a timeframe.

"[It's] important to remember this is not like flipping a switch on and off. This really is a process. Everyone wants a positive outcome. There are some thorny issues involved which have to be overcome. We want a successful Sudan; we want to be partners for Sudan. So we are working together on this, but obviously I can't go into technical issues because they're very specific and our two governments are dealing with them."

"In fact, I believe it was in 2017 that we [the USA] lifted sanctions regarding international trade and being able to participate in international finance. So the issue is, number one, reputational; number two, it is the arrears that Sudan has built up that will need to be negotiated in the future.

"The SST really refers much more to how the USA is obligated to respond to Sudan's request for broad projects and programmes in international financial institutions."

Victims of the December Revolution

In a statement on Sunday during a meeting with the US delegation, the committee demanded that the immunity must be lifted from some military personnel suspected of being involved in the crimes committed during the revolution. During the course of the public uprising and revolution, 290 people lost their lives including 15 children.

Also reported by this station earlier today, during a formal meeting with the Tibor Nagy and his delegation, Sudan's Attorney General Tajelsir El Hibir has conditioned the transfer of deposed Sudanese dictator Omar Al Bashir to the International Criminal Court (ICC)on the outcome of the ongoing peace talks with the Darfur rebel movements in Juba, explaining that that the handing over of Al Bashir to The Hague depends on the outcome of the current peace talks, the victims, and other legal issues.

U.S. Hopes New Envoy Helps Stabilize Sudan
Tagged:
Copyright © 2020 Radio Dabanga. All rights reserved. Distributed by AllAfrica Global Media (allAfrica.com). To contact the copyright holder directly for corrections — or for permission to republish or make other authorized use of this material, click here.