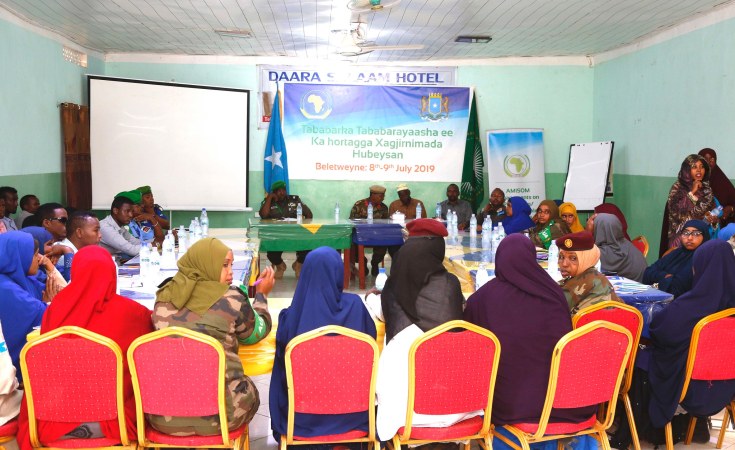 AMISOM/Flickr
Participants attend a training of trainees session on preventing and countering violent extremism in Beletweyne, Somalia on 8 July 2019. The training was organised by the African Union Mission in Somalia (AMISOM).
Voice of America (Washington, DC)
By Harun Maruf

More than a decade ago, some 20 young Somali-Americans shocked their families when they left behind jobs and schools and returned to their native Somalia to join jihadist group al-Shabab. Now at least two of them have defected, and say their deadly adventure ruined their future.

Ahmed Ali Omar and Abdulkadir Ali Abdi left al-Shabab 16 months ago, but are now hiding in the Somali capital, afraid of being hunted down by the group's assassins.

In an exclusive interview the two men gave to the VOA Somali program Investigative Dossier, Omar says he would have been killed or jailed if he stayed with the group.

"They found out we were going against their extremist, rigid views and they were plotting to arrest us," he said.

Investigative Dossier confirmed Omar's and Abdi's defections with government officials and other defectors. The two men are now living in a house provided by the Somali government's National Intelligence and Security Agency.

Omar sounded remorseful in the over one-hour phone interview conducted last week. He said their future is ruined but wants to warn others from joining jihadist groups.

"We are expressing our opinion so that the problem we faced doesn't happen to other young Somali youth," he said. "We can be an example, so that they don't get brainwashed and their heads turned around in the same way they did to us, so that their future is not jeopardized, so that they take advantage of the opportunities they have."

Omar said there were a series of incidents that turned him and Omar against al-Shabab.

The last was the truck bomb explosion at a Mogadishu Zobe's intersection on Oct. 14, 2017, that killed at least 587 people and injured hundreds more. The attack is the single largest terrorist attack in African history.

The attack was so indiscriminate that even some members of al-Shabab lost wives and relatives in the blast, Omar said.

"It impacted me especially when I saw the pictures," he told VOA. "We discussed, we asked, but there was no clear reason to convince the people [to accept what happened]."

Omar said other reasons he and Abdi left the group were al-Shabab's harsh treatment of Somalis, including the "senseless" killing of civilians, looting people's wealth, and "apostatizing people," meaning the group designated Muslims as non-believers in order to justify their killing.

The two could not leave the group right away. "We have been planning to leave al-Shabab but the conditions didn't permit," Abdi said.  "It was like you can't leave them and you can't live among them."

Omar and Abdi finally defected to the Somali government in September 2018. They were put into a rehabilitation program. They said they benefited from the program and have renounced violence, and they want to be placed in a position where they can support security programs.

Both Omar and Abdi were born in Somalia but moved to the United States with their families in the 1990s as Somalia sunk into chaos and violence after its civil war. They settled in Minneapolis, Minnesota, which has the largest Somali-American community in the U.S.

Abdi, who arrived in the U.S. in 1998 as a refugee, had just finished high school when Ethiopia sent tens of thousands of troops into Somalia in 2006 to stop a takeover of the country by the Islamic Courts Union.

"Most of the Somali community were against the Ethiopia intervention, they used to hold events condemning and fundraising and I participated," he said. He said he also heard Friday sermons denouncing the Ethiopians and watched videos showing alleged Ethiopian atrocities in Somalia.

"This produced young men who are being influenced by the situation," Abdi said. "Youth is more like action, not talk, so we thought money is not enough, so we have to do action."

Recruiters for al-Shabab persuaded Abdi and Omar to return home and take up arms. Omar, who initially wanted to be a doctor after graduating high school, arrived in Somalia in late 2007 at age 19. Abdi came a year later, at age 17.

Their departure and others put the community under a harsh spotlight, as the FBI and law enforcement agencies hunted for the recruiters. Some Minnesota Somalis described them as brainwashed young men, but others said pro-al-Shabab locals manipulated them.

Community leaders say they are relieved young men are seeing the light even after such a long time and are turning their back on al-Shabab.

"It affected the community negatively," said Abdirahman Mukhtar, a community activist who knew many of the Minnesota men who traveled to join al-Shabab. "We attracted unwanted attention at airports during travels, in mosques and events.

"Even [then-presidential candidate Donald] Trump came to Minnesota and put Somalis under the spotlight," he said, referring to a 2016 campaign visit where the future president said Minnesotans had "suffered enough" from the influx of Somali refugees.

Omar and Abdi said several of their Minnesota colleagues are in al-Shabab detentions because the group accused them of having intentions to defect.

They gave Investigative Dossier the names of seven people they say are now in al-Shabab prisons. The relatives of some of the men have separately confirmed their detention.

Omar and Abdi have also given details of an incident in June 2009 where one of the Minnesota recruits, 17-year-old Burhan Ibrahim Hassan, was shot and killed by another al-Shabab fighter.

Abdi said Hassan was walking near the house of a top al-Shabab commander, Yusuf Isse Kabakutukade, when he was shot dead by a bodyguard, who said Hassan had "compromised" the safety of an official.

According to Omar and Abdi, who said they arrived at the scene of the shooting within minutes, Kabakutukade promised to pay blood money to Hassan's family. But family members say they have never received any money, and say their choice was that the person who pulled the trigger is put to death by the group.

"We heard he did not die in fighting, said Hassan's uncle, Abdirizak Bihi. "He was ill and we heard he was killed by people within the group."

Point of no return

At this point, it would be hard for either Omar or Abdi to return to the United States. U.S. federal prosecutors have charged them and other al-Shabab recruits with offenses that include conspiracy to provide material support to terrorists and foreign terrorist organizations; conspiracy to kill, kidnap, maim and injure people outside the United States; possessing and discharging a firearm during a crime of violence; and solicitation to commit a crime of violence.

Omar's brother Guled is already in a U.S. prison. He was convicted for conspiring to commit murder in Syria on behalf of the Islamic State of Iraq and the Levant (ISIL) and to provide material support to the designated foreign terrorist organization. He is serving a 35-year sentence.

Both Omar and Abdi have family members in the Minneapolis area, and said they would go back there if not for the charges against them. Omar said that after leaving al-Shabab, the first thing he would have done is return to the U.S, if there was no indictment. 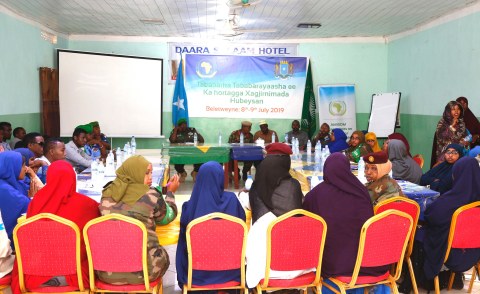 AU Peacekeepers Free Al-Shabaab Stronghold in Somalia
Tagged:
Copyright © 2020 Voice of America. All rights reserved. Distributed by AllAfrica Global Media (allAfrica.com). To contact the copyright holder directly for corrections — or for permission to republish or make other authorized use of this material, click here.