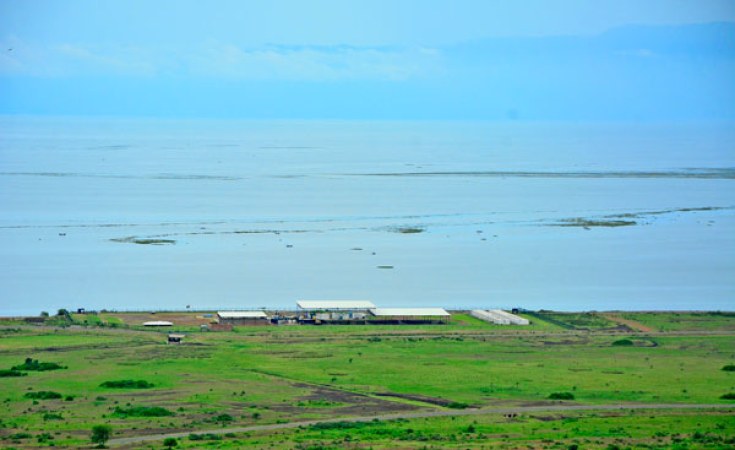 Frederic Musisi/Daily Monitor
An oil field operated by Cnooc on the shores of Lake Albert in Hoima District.
Oil in Uganda (Kampala)
By Francis Mugerwa

Oil explorers have discovered commercially viable oil deposits in the Albertine basin in western Uganda and there are efforts to develop the fields for commercial oil production which is expected to commence around 2023.

The oil resources in Uganda just like in many parts of the world have been discovered in an ecologically fragile area. Lake Albert straddles along the Uganda-Democratic Republic of Congo border.

In a petition dated November 25, 2019, which was addressed to the Executive Director of Uganda's National Environmental Management Authority (NEMA), 23 CSOs claimed that Uganda's oil production will hurt conservation of the lake and the livelihoods of communities.

"However, this source of life is threatened by oil activities under the Tilenga, Kingfisher and the East African Crude Oil Pipeline (EACOP) projects in Uganda," a petition signed by Mr. John Kakule Lufukaribu, the CSO Coordinator, Ituri Province reads in part.

The Ugandan government recently conducted Environmental and Social Impact Assessments (ESIAs) and public hearings were conducted were members of the public and civil society leaders among others proposed mitigation for the impacts of the Tilenga, Kingfisher, and EACOP oil projects.

The developers presented interventions they intend to use to avoid, minimize or mitigate the impacts of the projects.

According to the CSOs, in line with the 2007 Uganda-DRC Ngurdoto agreement, and to promote community livelihoods, conservation of Lake Albert and security between our two countries, it was imperative for NEMA to consult communities in the DRC before any decisions on the Tilenga, Kingfisher and EACOP ESIA reports were or are made.

Oil in Uganda understands that on October 21, 23 and 25, 2019, NEMA and Uganda's Petroleum Authority of Uganda (PAU) organized public hearings on the EACOP ESIA report where representatives of civil society organizations (CSOs) and fishermen from the Ituri region participated.

After the public hearings, the CSO representatives claim that in November 2019, they organized activities in the villages or areas of Tacoma, Kasenyi, Bunia and Boiga in the Ituri region among others.

"The communities objected to oil activities on Lake Albert and called on NEMA to consult them before making any decision on the Kingfisher and EACOP oil projects' ESIA reports," the petition reads in part.

The CSOs claim that Tilenga and Kingfisher project developers plan to abstract water from Lake Albert to support their projects' activities and figures from Uganda's Directorate of Water Resources Management (DWRM) show that over 500,000 cubic liters of water will be required per day when oil production starts in Uganda.

"The Tilenga and Kingfisher project developers recognized the abstraction of water from Lake Albert to support their activities as a trans-boundary threat (in their ESIA reports). However, they failed to provide adequate mitigation measures to address the threats. This is a serious concern for us in the DRC," the petition reads in part.

They claimed that Lake Albert supports trade between the DRC and Uganda. According to the petition, it is estimated that as of May 2019, Uganda had earned over $532 million from the DRC while Congo had exported goods worth $30 million to Uganda. In November 2019, President Museveni of Uganda met with his DRC counterpart Felix Tshisekedi where they held diplomatically and business discussions.

"We are concerned about the insecurity that will arise due to oil activities on Lake Albert. Uganda and the DRC have a history of insecurity and tensions," the petition said. Between 1997 and 2003 Congolese authorities accused the Ugandan army of occupying part of the Ituri region and plundering its minerals and other resources.

The DRC government took the Ugandan government to the International Court of Justice (ICJ) where Uganda was ordered to pay $ 10 billion in reparations to the DRC. However, Uganda denied any wrongdoing and President Museveni instituted the Justice Porter commission which absolved Uganda of the accusations labeled against it.

The Porter Commission of Inquiry exonerated President Yoweri Museveni, his family, his government, and top military officers of charges levied by a UN panel in April 2001 of involvement in the illegal exploitation of natural resources of the Democratic Republic of the Congo (DRC)

The CSOs suggested that the Ugandan government works with the DRC government to consult communities in the DRC that will be affected by oil projects in Uganda before making any decision on the Kingfisher, Tilenga and EACOP oil projects' ESIA reports.

They suggested that NEMA stops issuing ESIA certificates of approval for oil developments in eco-sensitive areas such as Lake Albert, Lake Edward, Queen Elizabeth National Park, and others. They thus recommended the cancellation of the Tilenga oil project's ESIA certificate of approval, which was issued early 2019.

"Experience from countries such as Nigeria shows that the benefits that conservation confers on communities outweigh the benefits of oil exploitation," the petition added. They threatened to drag the Ugandan Government to court if their recommendations are disregarded.

The NEMA Senior Public relations Officer, Tonny Achidria advised the CSOs not to worry. "The ESIAs are reviewed by our technical team and by the time we issue a certificate, it means that they have passed the technical requirements," Achidria told oil in Uganda.

He says NEMA approvals are done in a transparent manner and certificates issued to developers are public documents and developers are required to display them.

"The conditions therein (in the certificates) specify mitigation measures which developers should undertake to ensure that they avoid, minimize or mitigate the environmental dangers of the projects. So those CSOs should not worry. If there are grievances, they should be shared. There are available mechanisms to address them," he says. He also shared that NEMA has undertaken continuous monitoring of the oil developments from initial stages and will continue monitoring during the development phase, the production phase up to the decommissioning stage to ensure that there is compliance to environmental guidelines.

Tagged:
Copyright © 2020 Oil in Uganda. All rights reserved. Distributed by AllAfrica Global Media (allAfrica.com). To contact the copyright holder directly for corrections — or for permission to republish or make other authorized use of this material, click here.