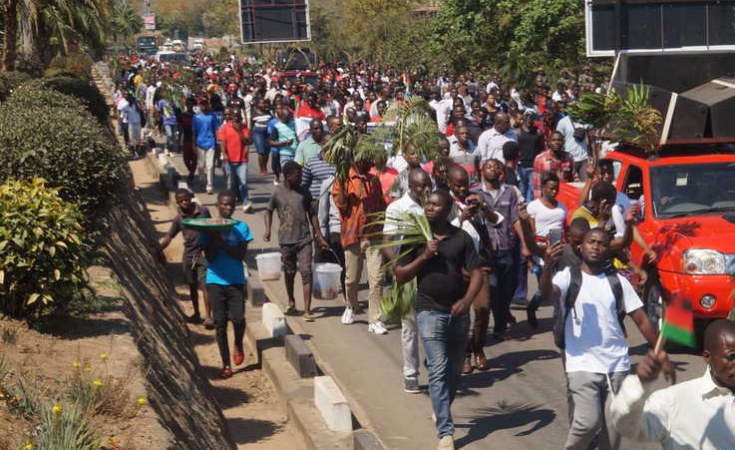 Lameck Masina/VOA
Since the May elections, opposition supporters have staged protests about the election of President Peter Mutharika.
Deutsche Welle (Bonn)

The court ruled to overturn the 2019 presidential vote after the opposition argued that the vote was rigged. The court ordered a new election to be held within 150 days.

In a first for the southern African nation, Malawi's Constitutional Court annulled the results of last year's presidential election in a decision announced Monday.

Judge Healey Potani said "in every election there are irregularities. However, in the present case, the irregularities were widespread and systematic and affected the result... We order the nullification of the election."

"We further order that a fresh election be held in accordance with the law and pursuant to directions we will make soon. We also order that elections should be held within 150 days."

President Peter Mutharika (above) was narrowly reelected in the May 2019 election after securing 38% of the vote. Runner-up Lazarus Chakwera secured 35% of the vote while former vice president Saulos Chilima came in third with 20%.

The two opposition candidates challenged the result, alleging that the tally sheets were tampered with and that some polling stations used correction fluid to alter the results.

Malawi's electoral commission confirmed that it received 147 reports of alleged irregularities, but both the commission and Mutharika said the irregularities were not enough to affect the outcome.

It was the first presidential election to be challenged in the courts in Malawi since the country's independence from Britain in 1964.

Security was tight across the country, as authorities anticipated potentially violent protests in response to the court's decision.

Ahead of the ruling, Chilima had urged Malawians to remain peaceful.

"There is more that binds us than that which separates us," he said. "Violence and civil strife are alien to this land. We must not lose this gem. It is what defines us a people."

Some protesters have demanded the resignation of Jane Ansah, the chairwoman of the electoral commission.

No Winner in Malawi Presidential Elections Without Majority Vote - Court