Zimbabwe: Vegetables Rot in Food Markets Across Zimbabwe While Half the Population Faces Food Insecurity 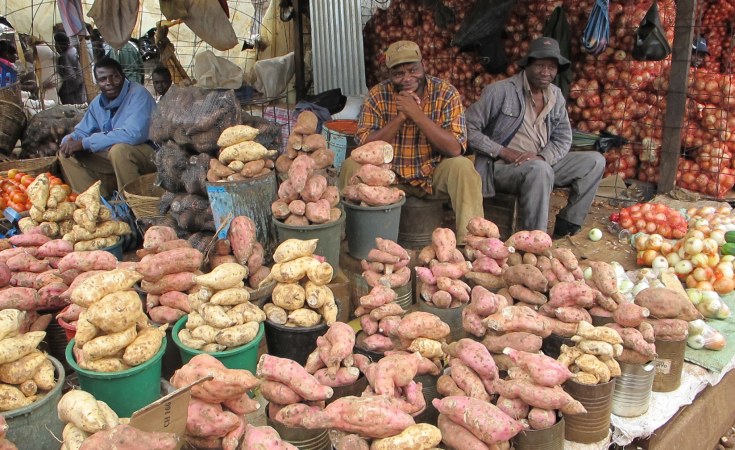 Bulawayo — Piles and piles of rotting vegetables at food markets situated right in Zimbabwe's central business district would elsewhere be viewed as a sign of plenty.

But this Southern African nation has not been spared the irony of food wastage at a time of food shortages.

In Bulawayo's sprawling vegetable market in the CBD, which provides a livelihood for hundreds of vendors, rotting vegetables have become the norm.

With the country facing an ever-growing food crisis that has seen international appeals for humanitarian assistance, the lack of activity at vegetable markets in the country's major cities highlights the challenges developing countries face with balancing food production and consumption.

"We cannot give away the vegetables just because we fear they will rot," said Mihla Hadebe, who sells anything from tomatoes to cabbages to mangoes and cucumbers.

"Even if we lower prices, people just do not have money that is why you see a lot of vegetables rotting like this," Hadebe told IPS from his vegetable stall.

And this is happening at a time vendors say there is a shortage of vegetables that range from staples such as African kale, cabbages and tomatoes, and whose shortages have pushed up prices.

While a bunch of kale sold for ZWD.2 (about 1 US cent) in December, the price has now shot up to ZWD5 (about 3 US cents), Hadebe said "because there is nothing [available] where we buy these veggies. The farmers say there is no water".

According to the Southern Africa Media in Agriculture Climate and Environment Trust (SAMACET) and the Food and Agriculture Organisation it is difficult to quantify the losses but they acknowledge the wastage in Zimbabwe is quite huge.

Zimbabwe is one of many countries included in the Food Sustainability Index, created by the Barilla Centre for Food and Nutrition and the Economist Intelligence Unit (EIU), and the country has become the focus of concerns about under-nutrition amid a crippling drought blamed on climate uncertainty.

Vegetables are thrown away despite reminders by nutritionists of their value in daily consumption habits.

The 2018 Barilla report titled Fixing Food, noted that Zimbabwe was one of 11 African countries still lagging behind in "implementing health eating guidelines at national level."

"Given the fact that about a third of the food the world produces is lost or thrown away, sustainable agriculture can only go so far. Tackling consumer food waste and post-harvest waste (the loss of fresh produce and crops before they reach consumer markets) will involve everything from changing consumption patterns to investing in infrastructure and deploying new digital technologies. None of this is easy," the report noted.

"But while enough food is already being produced to feed the world's population, ending hunger and meeting rising demand for food will not be possible without addressing this high level of food loss and waste," the report says.

It comes at a time when Zimbabwe seeks to address the growing problem of under-nutrition. The United Nations Children's Fund (UNICEF) has already raised alarm about high levels of poor nutrition in the country, noting that the problem is especially worse among children and women.

"In Zimbabwe, nearly 1 in 3 children under five are suffering from malnutrition, while 93 per cent of children between 6 months and 2 years of age are not consuming the minimum acceptable diet," James Maiden, UNICEF Zimbabwe spokesperson told IPS.

"Across the country about 34,000 children are critically suffering from acute malnutrition," Maiden said.

While in urban and rural areas, families have long produced their food in community gardens, the projects have suffered because of extreme weather despite being fed by boreholes.

"What is happening is terrible. We have borehole but as you can see our vegetables are suffering under this heat," said Judith Siziba, one of many women who plants vegetables for domestic consumption in the city of Bulawayo.

"There is nothing we can do but watch. We thought even if there are no rains, the boreholes would offer us relief but no," she told IPS.

This is at a time concerns have been raised that climate change has also affected groundwater levels when boreholes are expected to offer relief to the agriculture sector to ensure food security.

Zimbabwe is one of many countries that have seen record high temperatures, throwing agriculture activity into uncertainty as food insecurity worsens.

This has worsened everyday diets amid poor salaries despite full supermarkets in a country that falls under sub-Saharan African region where the Food Sustainability Index says is home to the world's hungriest populations.

The World Food Programme (WFP) says the number of people requiring food assistance continues to rise in Zimbabwe, stating that half the population -- nearly 8 million people -- is now facing food insecurity. It has also raised concerns about under-nourishment for both children and adults.

"WFP is working towards doubling the number of people it assists in Zimbabwe. We aim to support 4.1 million people who are facing hunger," said Isheeta Sumra, the WPF-Zimbabwe spokesperson.

"As things currently stand, we urgently need $200 million to see us through till mid-2020. The situation is dire, and we can foresee our needs growing over 2020," Sumra told IPS.

Nathan Hayes, an analyst with the EIU, believes the country has been slow in responding to the food and nutrition crisis.