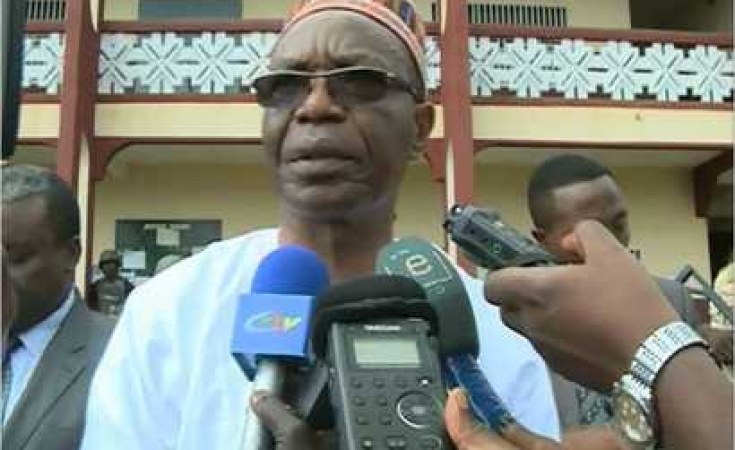 Voice of America
Governor Deben Tchoffo visited a Presbyterian school where 80 students and their principal were kidnapped in Bafut, near Bamenda in Cameroon on November 5, 2018.
Voice of America (Washington, DC)
By Moki Edwin Kindzeka

Bamenda — Economic activity is at a standstill in Northwest and Southwest Cameroon, as separatist fighters have imposed a travel ban and vowed that local and parliamentary elections set for Sunday will not take place.  Civilians say they do not believe the government will be able to protect them from separatists who have been abducting candidates, election officials and people found with voters cards.

Peter Nanji,  a 54-year-old teacher, is driving out of Bamenda with his wife and three children. He says he is escaping to the town of Bafoussam some 90 kilometers away because his neighborhood, Ekata, was attacked by Cameroon's military on Thursday morning.

"The military suspects that Ekata is a stronghold for the separatist fighters that is why they attacked and killed indiscriminately so as we speak, the area is deserted," he said.

Nanji said at least nine people including his landlord were killed.

Meanwhile, Noela Dymba, a 32-year-old trader, is waiting for a bus to leave Bamenda. She previously fled says the northwestern town of Bafut following heavy clashes between the military and separatist fighters.

"As election day is approaching, the violence is increasing. Government on its side is deploying more military in the Northwest and Southwest regions and so there is uncertainty," she said.

Most towns and villages in Cameroon's two English-speaking regions have become increasingly deserted since the first week in January, when the military launched what it called severe attacks on separatist forces.

The separatists have been active too, torching public buildings, including those of the elections management body ELECAM.

Campaign caravans have been attacked on several occasions and the opposition Social Democratic Front and the ruling Cameroon Peoples Democratic Movement say at least 80 of their supporters and candidates were abducted. The whereabouts of 60 others is unknown.

Separatists have claimed responsibility but promised to release the captives after the polls.

Deben Tchoffo, governor of the Northwest region, says the population should stay put, insisting the the government will ensure their security.

He adds that the military has been instructed to kill the separatists if they fail to surrender.

"I am sending a strong message to those that could be tempted to disrupt the electoral process that they should start preparing themselves to face the might [wrath] of the state," he said.

In spite of the violence and uncertainty, the government of Cameroon has vowed that Sunday's elections must take place.

Unrest broke out in Cameroon's English-speaking regions in 2016, when teachers and lawyers protested the dominance of the French language and French-speaking officials.

The conflict with Cameroon's military since then has killed about 3,000 people, many of them villagers caught up in the fighting. The United Nations reports that at least 50 000 have escaped to Nigeria.

Previous Story
Polls Overshadowed By Boycott, Separatist Violence
Next Story
Rise in Killings in Anglophone Regions Ahead of Parliamentary Elections

Rise in Killings in Anglophone Regions Ahead of Parliamentary Elections

UN Chief 'Deeply Concerned' About Deadly Attack in Cameroon
Tagged:
Copyright © 2020 Voice of America. All rights reserved. Distributed by AllAfrica Global Media (allAfrica.com). To contact the copyright holder directly for corrections — or for permission to republish or make other authorized use of this material, click here.

If He Hits You, He Loves You - Zimbabwe Tackles Myths & Violence
U.S., Canada and Africa