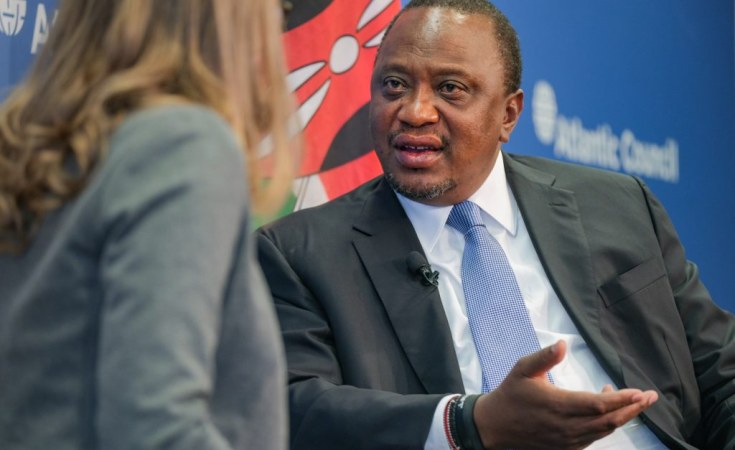 Washington, DC — Kenyan President Uhuru Kenyatta implored an Atlantic Council audience on February 5 to see Africa as "more than just a continent producing security threats or unregulated migration that must be contained," but rather as a region that has "immense strategic importance to the security and prosperity of the transatlantic alliance."

Kenyatta spoke at the Atlantic Council as part of his trip to Washington, DC to attend the National Prayer Breakfast with Kenyan opposition leader Raila Odinga, where they will speak about their efforts to reconcile Kenya's highly polarized society, which has suffered from several electoral crises over the last three decades. Kenyatta explained that his "Building Bridges Initiative" will attempt "to preempt any further escalation in the cycle of no-holds-bar political competition by taking early and decisive action to reach out across the aisle." Kenya had seen three successive presidential elections end in close contests and marred by allegations of fraud and limited instances of violence. In March 2018, Kenyatta reached an agreement with Odinga to work toward reform of Kenya's political system to ease the polarization.

The "first-past-the-post [electoral system] in Kenya has proved to be not only unsuccessful but unsustainable," Kenyatta explained, as groups increasingly saw the close elections as "winner-take-all" with immense costs for defeat. While he refrained from predicting specific proposals for reform, the Kenyan president said he hoped Kenya would be able to "come up with a social contract that always allows for inclusivity, so that there are no groups or regions that feel left out."

Kenyatta's visit also comes at a time when "the US-Kenyan relationship might just be at the strongest point in history," according to Atlantic Council President and CEO Frederick Kempe. Kenya's commitment to "political, structural, and economic reforms," have allowed the country to emerge as "an economic, commercial, and logistics hub for the East African region and a global leader in the development of mobile money and financial inclusion," Kempe explained. He noted that US President Donald J. Trump had announced a strategic partnership with Kenya during Kenyatta's 2018 Washington visit, and that both countries have been holding quarterly strategic reviews.

There are also reports that the United States and Kenya could soon announce the beginning of negotiations for a new free trade agreement. Kenyatta argued that the United States and other developed economies have much to gain from investing in Africa, especially as these advanced economies struggle to find investment returns to fund their aging populations. Africa has "the world's youngest and fastest growing population, the most unexploited land for agriculture, immense mineral wealth, and a large consumer market," Kenyatta explained. Kenya specifically is not just a "gateway" to other African markets, he said, but is "a platform of skills, entrepreneurship, stability, and the rule of law." While he joked that he could "neither confirm nor deny the rumors" of free trade negotiations with Washington, Kenyatta stressed that Kenya is "very keen to seeing a deepening of the trade between our two countries."

Bronwyn Bruton, director of programs and studies and deputy director in the Atlantic Council's Africa Center, explained that "the emergence of Kenya as a standard bearer for growth is truly welcome," especially as investors begin to worry about weakness and instability in other large African economies such as Nigeria, South Africa, Angola, and Ethiopia." There is some concern, Bruton added, that Kenya's pursuit of bilateral trade deals with the United States and potentially the United Kingdom could undermine efforts to get a continental free trade agreement for Africa, but Kenyatta said he did not see the bilateral agreements as "threatening anything." He said that "Kenya wants to be a pace setter" for the rest of the continent and can use these negotiations as a "learning step for others on the continent" before they engage with these advanced economies themselves.

While highlighting the potential growth opportunities, Kenyatta also stressed that supporting the African economy would help alleviate many of the security threats on the continent. "Millions of our [youth] are unemployed and unable to match their expectations [for life]," he explained. "It is an unsustainable situation and if this reality does not change quickly, we will produce an Africa with many security crises that will leave no corner of this world untouched." He argued that "we together will never recognize the immense wealth that we can build together or hope to hold onto the little we have if African states remain relatively weak and vulnerable to destructive actors," such as terrorist groups and criminal networks.

Kenyatta reported that his government is continuing to work "together with other regional players to surge our military efforts" against the Al-Shabaab terrorist group in Somalia, which continues to fight for control of Somalia and conduct terrorist attacks in Kenya and other regional countries. Kenyatta hopes that regional efforts to contain and destroy the group will "offer room for a workable political consensus in Somalia," but added that "the effort to defeat the group would be helped immensely by compliance to countering terrorist financing, fighting money laundering, and [ensuring that] other international obligations against terrorism are observed."

The Kenyan president further warned that many in Africa are growing concerned that the continent is once again falling prey to the international competition that caused so much pain during the nineteenth and twentieth centuries. He explained that foreign powers are already "in some cases weaponizing divisions, pursuing proxy actions, and behaving like Africa is for the taking." He called for foreign countries to stop playing proxy games in areas such as Somalia, Yemen, and Libya and argued that potential economic competition between the United States and China could be just as damaging. "We don't want to be forced to choose," between Beijing and Washington he said, "we want to work with everybody." Beijing and Washington both offer important economic advantages for Kenya and can both be worked with to achieve strong, sustainable growth, he argued. "This world is big enough for all of us."

Kenyatta stressed that Africa should no longer be seen as a playing ground for international games or an exporter of crises, but as "the world's biggest opportunity" for economic growth and stability. The international community together, he stressed "have the most to gain in making Africa work for its people."

Reexamining 'Prosper Africa' - the Trump Africa Strategy
Tagged:
Copyright © 2020 Atlantic Council Africa Center. All rights reserved. Distributed by AllAfrica Global Media (allAfrica.com). To contact the copyright holder directly for corrections — or for permission to republish or make other authorized use of this material, click here.