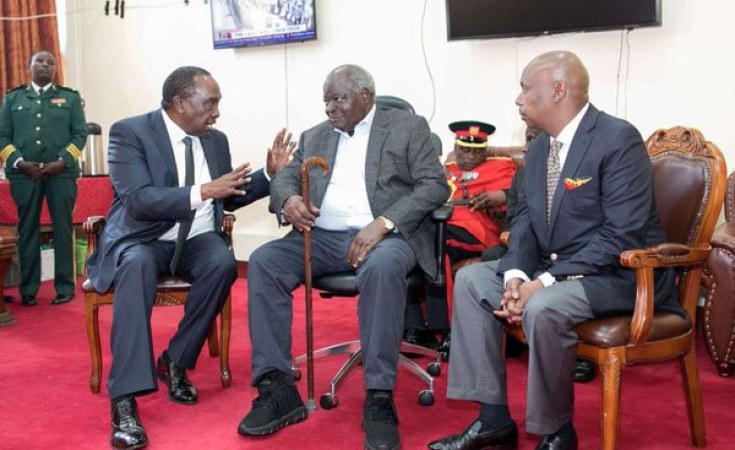 What happens next in the family of former President Daniel arap Moi will reveal whether his vast empire worth billions of shillings will remain intact or crumble like those of former strongmen who left power without a clear succession plan.

Close allies of the former president told the Sunday Nation that he maintained a tight grip on his vast estate even as he was ailing.

"We would look for him to sign bank cheques even when he was admitted at Nairobi Hospital," a lawyer who worked with the Mois confided in the Sunday Nation.

Since he left power in 2002, his son Gideon, the Baringo Senator, has slowly emerged as the heir apparent of Moi's political and economic fortune.

However, Moi's death has also strongly brought to the fore his other son Raymond, the MP for Rongai in Nakuru County, who has appeared to be the spokesperson of the family.

Insiders say that Raymond also enjoys the favour of his brother Philip. Their other brother, John Mark, has been unwell.

They also have three sisters - Jennifer, Doris and June. In April last year, the Mois buried their eldest brother, Jonathan.

Despite being the son of a billionaire, court records estimate the estate of the late Jonathan to be about Sh30 million.

The family has in the past experienced sharp differences, notably during the burial of their mother, Lena, when Gideon and Jonathan differed on who was the family spokesperson.

"Simply because our father transferred most of his properties to you doesn't entitle you to become our spokesman," a source quotes Jonathan as saying during a heated family meeting as they prepared for the burial of Lena.

Jonathan - who was popularly known as JT - lived a quiet life as a farmer but was famous for his exploits as a rally driver, his alleged role in the murder of British tourist Julie Ward and also during his unsuccessful bid for political office.

Jennifer, who is Moi's eldest child, was born in 1953. She attended Kenya High School before going to the United States for further studies.

She has led a largely private life and little is known of her business activities.

Jennifer's husband, Stephen Kositany, who was the eldest brother of Soy MP Caleb Kositany, died in a road accident in 1994.

Jennifer, who has been staying with her father in Kabarak or at Kabarnet Gardens in Nairobi since the death of her husband, was later on to have a relationship with the late Jacob Juma.

Their love turned sour after she accused Mr Juma of trying to dispossess her of a 250-acre tea farm, Theta Tea Company, in Nandi County.

Mr Juma claimed to have bought the farm for Sh9 million in 2003 after it was auctioned by the Agricultural Finance Corporation.

Eventually, the court sided with Jennifer and ordered Juma out of the farm. In turn, she was asked to refund Juma the money.

John Mark, who is the least known of Moi's sons, was born in 1958. He was earlier on considered one of the brightest and most promising in the Moi family. He eventually left for the US.

Philip, who is a retired army major, was once known as the wild man in the family.

Moi reportedly had him enrolled into the Kenya Army straight after secondary school to knock some discipline into him.

Philip has been in the news over his acrimonious divorce with his Italian-born wife, Rosanna Pluda.

Mr Choge died in a road accident in 1998. Lastly, there is June, who is heavily involved in business activities, concentrating on land and property agency as well as development.