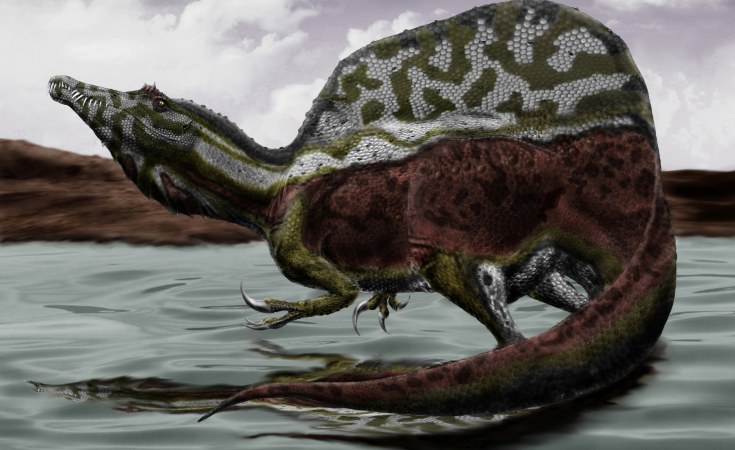 As dinosaurs go, Spinosaurus is one of the most recognisable: a predator with sharp claws, a long jaw full of teeth, and a big sail on its back. It lived near rivers, hunting for fish, 100 million years ago in a place that's now desert; the Kem Kem beds, a geological formation in North Africa.

Much like Spinosaurus, most of the dinosaurs that have been found fossilised in the area were supported by that riverine system. The remains of crocodile-like animals and fish are the most common fossil finds, especially in sediments from Morocco, Algeria and Egypt. The ecosystem supported a large community of predatory dinosaurs that ate meat or fish, as well as a minority of plant-eating ones.

Spinosaurus and his carnivorous relatives have gotten a lot of scientific attention, but the plant-eating part of the community has not been much in the spotlight.

I've just published a paper in the Journal of African Earth Sciences which compiles all the finds of long-necked, plant-eating (herbivorous) dinosaurs, called sauropods, from the Early Cretaceous period of North Africa.

Most of the fossil finds were teeth, which can tell us about the type of animal, what it ate and whether its location changed over time. The teeth provide information to reconstruct a complete palaeoecosystem. And further research stemming from these teeth finds will allow us to understand more about how different species lived together and where they all fitted into the food chain.

These sauropod fossils are, unfortunately, rare. For every sauropod tooth found, about 30 predatory dinosaur (theropod) teeth are found. It's not clear why there was such an imbalance between the carnivores and the herbivores. It might have to do with the riverine ecosystem, which supported fish-eating and other meat-eating animals more than it did plant-eaters.

Despite the rarity, there is some evidence of the presence of herbivores: ornithopods, two-legged plant-eating dinosaurs (like Spinosaurus they had "sails" on their backs), as well as sauropods, the big, four-legged, long-necked dinosaurs mentioned in the new paper.

We also don't know why bones were not so well preserved in this area. Only a few instances of more complete skeletons are known so far, from Morocco (Rebbachisaurus garasbae), Tunisia (Tataouinea hannibalis), Niger (Nigersaurus taqueti) and Egypt (Paralititan stromeri).

But teeth are made of harder material than bone: tooth enamel. This hard mineral endures time and burial much better than bone. Another reason teeth are found more often than bones is that sauropods would shed their teeth quite often - every 14 days, in the case of Nigersaurus.

Teeth can reveal a lot about diversity when they are reasonably well-preserved. In our study, we compared all known occurrences of sauropod teeth and found three different types. These were titanosauriform (think Brachiosaurus from the movie Jurassic Park), titanosaurian (a more evolutionary advanced type of the titanosauriform) and rebbachisaurid (something like Brontosaurus, but with a lower neck and broader muzzle). So far, most tooth types can be linked to a type of sauropod that is represented by bone material as well. But there are instances where there are only teeth - a mysterious clue to an unknown type of sauropod.

Sauropod teeth have been used as a tool to assess migration.

Migration in the Early Cretaceous between the two continents (a sort of "island hopping" in the Mediterranean) has been shown in several other studies, and our latest research further confirmed these finds. Some sauropod teeth from North Africa even resemble findings from South America, showing evidence for a common ancestor between the sauropods of these two continents.

Teeth can also tell us about diet, as they are the main tool for gripping and processing food. One tooth of a Moroccan sample, for instance, shows extreme polishing. This suggests the dinosaur species in question had a grit-based, low-browsing diet.

One way to learn about diet is by looking at microwear. These are microscopic scratches on the worn surface of the tooth, where the tooth was grinding together with an opposing tooth, or with food. Coarse microwear, like pits and big, wide scratches, tends to indicate more grit in the diet, and finer microwear - like small scratches - suggests softer vegetation.

Another way to infer diet, or, more broadly, trophic level (where an animal was in the food chain), is to measure trace elements from dental enamel. While they are alive, animals' bodies take up trace elements through food and water. These elements are stored in their bones and in their teeth. Calcium builds up more than other elements, so the more calcium is present compared with other elements, the higher the animal is in the food chain.

So far, it seems that rebbachisaurs and titanosauriforms had different dietary lifestyles. This makes sense: they were both long-necked dinosaurs, but they differed in neck length, height and posture, so they probably ate different types of vegetation. This would have allowed them to avoid competition with each other.

The next step in the study of the North African fossils is to look at the whole ecosystem using the teeth of both carnivores and herbivores. Isotope analysis has already been done, shedding light on the feeding ecology of Spinosaurus. The next step is to look at strontium trace elements, to find out more about exactly where each animal was in the food chain and how the different dinosaurs coexisted.