Africa: A Legacy of Bloodshed and Corruption 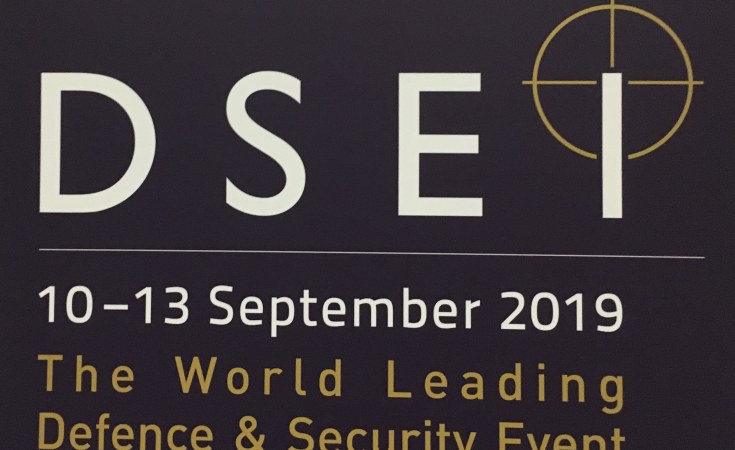 The world's biggest arms fair, which turned 20 in 2019, is lauded as a 'fantastic showcase' by its British hosts, but critics strongly disagree

The Defence and Security Equipment International (DSEI), which boasts of being the world's largest arms fair, celebrated its 20th anniversary last year. The biennial event, held in London, aims to bring together the global arms industry under one roof, showcasing more than 1,700 exhibitors and 36,000 attendants from more than 50 countries. It is supported by the United Kingdom's Ministry of Defence and Department for International Trade, as well as BAE Systems, the UK's largest arms manufacturer. Political insiders defend the country's role as an arms exporter and the DSEI's role in generating arms sales as sources of high-tech research and jobs. "The UK defence industry is looking to recruit more engineers, scientists and developers into 200,000 jobs and up to 10,000 apprentices within UK defence companies," according to James Gray MP, a member of the House of Commons Defence Committee, quoted in a DSEI statement. "DSEI is a fantastic showcase for defence companies where international buyers, sellers, developers, thinkers, educators and the trainers can all get together."

Yet critics of Britain's role in the global arms trade, and the industry as a whole, see DSEI less as a "fantastic showcase" and more as the shiny centrepiece of a globally destructive sector unrivalled by any other. The exhibition is met with protests and the mayor of London, Sadiq Khan, has called for it to end. Arms exports are estimated to contribute as much as £12 billion to the UK economy. Andrew Feinstein, a former South African MP for the ANC and author of The Shadow World: Inside the Global Arms Trade, is one such critic. "In the 20 years of its existence DSEI has, probably more than any other trade show of any sort anywhere in the world, contributed to the death and suffering of Africans," Feinstein told Africa in Fact. "Its legacy is one of bloodshed, corruption and Britain being at the forefront of undermining good governance across the African continent." Countries with a recent history of conflict or military suppression sent delegations to DSEI 2019, officially invited by the UK government. From Africa, they included Algeria and Nigeria, while Morocco's occupation of Western Sahara did not preclude it from an official delegation invitation.

Algeria found itself on the UK government's list of core markets for defence and security opportunities, along with Tunisia, South Africa, Botswana, Mozambique and Angola. Egypt was also among them - and remains a core market for UK arms exports. A delegation was officially invited by the UK government to attend DSEI last year despite appearing in the UK Foreign and Commonwealth Office (FCO) 2018 "human rights priority countries" report. According to the UK government's report, "the human rights situation in Egypt continued to give cause for concern". It cited new restrictions on media and online freedoms, and a government campaign against civil society, cases of torture, enforced disappearances and extended pre-trial detention. At least 250 cases of enforced disappearances were documented by lawyers, with thousands of individuals estimated to be in pre-trial detention, often in solitary confinement for extended periods." Andrew Smith, spokesperson for the NGO Campaign Against the Arms Trade (CAAT), explains the apparent contradiction within UK policy. "There's always been a total hypocrisy at the heart of UK foreign policy and UK arms exports," he told Africa in Fact.

"The FCO might deem some of these countries a concern, but the government as a whole can still deem them very close allies." Feinstein agrees. "By any measure, Britian sells arms to whoever it wants to. The bottom line is the UK puts sales of weapons way ahead of any consideration of human rights. It puts profits ahead of people," he says. But the DSEI does not see this as a true characterisation of its exhibition or of how it and the UK government operate. "The presence of a delegate or visitor from any country should not be taken as a presumption that the export of equipment to that country would be permitted," a spokesman for DSEI said. "That is a matter for the UK government and their export licensing process, which operates to the highest regulatory standards." Feinstein dismisses these assertions: "Their [DSEI] first assumption is profoundly wrong. The second, that the UK has an ethical system that guides export arms policy, is frankly a nonsense," he argues. That Egypt and South Africa, the respective powerhouses of north and southern Africa, have been identified as core markets is no surprise due to the relative size of their economies and the different roles they fulfil.

Egypt, due to its proximity to the Middle East, can serve as a political ally for the UK arms industry's main market, Saudi Arabia, and the ongoing conflict in Yemen. Egypt's president, Abdel Fattah el-Sisi, has also called for the lifting of a UN arms embargo on neighbouring Libya. Under its former leader, Muammar Gaddafi, Libya was a key market for the UK government, especially after the former prime minister, Tony Blair, visited the country in 2004. Smith believes that the legitimacy conferred by the UK government is another driving factor behind the country's large arms trade. "When a regime is buying weapons from the UK, they're not just buying weapons; they're also buying political support that goes with those weapons," he argues. This applies equally to countries such as Libya, Egypt, Turkey and Saudi Arabia. The UK gets money and the buying country gets both arms and tacit political support to maintain their position. Although both the UN and European Union (EU) can, and do, implement arms embargoes, these can ultimately prove ineffective due to previous deals, Smith explains.

In Egypt, for example, arms sold to former President Hosni Mubarak in the 1990s were used against civilians during the Arab Spring, despite an embargo now in place. "After the coup [in Egypt], an arms embargo was brought in by Europe, but it was probably the single worst embargo in the history of arms embargoes, because it was [so] momentary [that] absolutely nobody followed it," Smith says. Embargoes can prove ineffective because arms generally have a longer lifespan than the period of an embargo. Any arms deal signed the day before an embargo is put in place can still be completed. At the other end of the continent, South Africa is seen as the gateway to the African market, making it an attractive country to set up business in and to build links to the rest of Africa to sell arms. Feinstein outlines why the UK and Europe target this market particularly, and what advantages they have over the world's largest arms exporter, the US. "South Africa has been involved in a number of very corrupt arms transactions so [it makes it attractive] for British and European arms companies who can't compete with the Americans because the Americans have massive economies of scale over Europeans, or the Chinese who practically give away their weapons, so Europeans [are willing to] pay enormous bribes."

Yet, after 20 years of DSEI few people, if any, celebrate the anniversary - other than global arms dealers and people in the corridors of a couple of UK government departments in Whitehall. "The best thing we can do, if we are truly concerned about the socio-economic development of Africa, would be to shut it [DSEI] down and to properly regulate our arms trade," concludes Feinstein. For the moment, though, the UK and Europe will continue to sell weapons. DSEI will continue to bring together the global arms trade. And African citizens will continue to suffer the consequences. "Nobody is forced to sell weapons to anyone," says Smith. "Not every country in Europe is a major arms dealer. But those that are, are doing tremendous damage around the world."