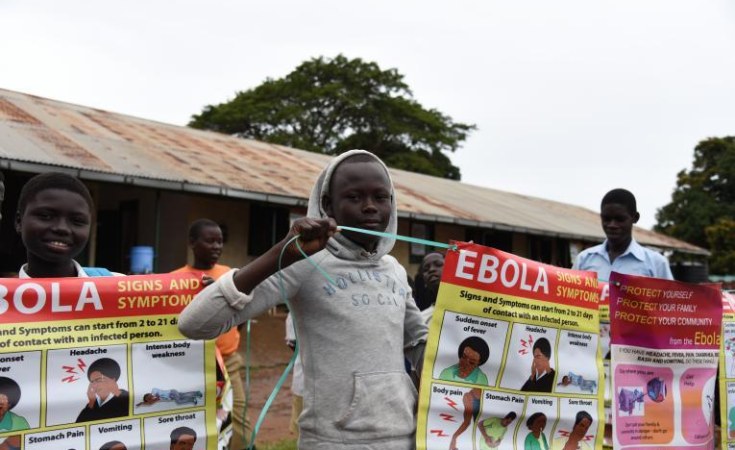 Ryeng/UNICEF
A girl holds up an Ebola awareness poster in a school in Yei, one of the high-risk areas for Ebola in South Sudan.
UN News Service

The Ebola virus disease outbreak in the Democratic Republic of the Congo (DRC) remains an international public health concern, experts meeting in Geneva concluded on Wednesday.

The World Health Organization (WHO) convened its Emergency Committee which reaffirmed that the risk remains high at the national and regional levels, but low globally.

"It was the unanimous view of the Committee that this event still constitutes a public health emergency of international concern (PHEIC)", the UN agency said in a statement.

"The Committee was concerned that withdrawing the PHEIC now might have adverse consequences for the response efforts through diminishing focus."

The outbreak in the eastern DRC began in August 2018. As of this month, there have been 3,308 confirmed cases and more than 2,250 deaths.

It is occurring in a region plagued by insecurity, which has affected response efforts, and while the DRC battles serious ongoing outbreaks of measles, cholera and other diseases.

"The country continues to need support to combat infectious diseases as well as to strengthen its health system. Further, there remains an urgent need to maintain international solidarity for the response", the statement said.

While noting an "encouraging trend" in Ebola case incidence and geographic spread, the health experts said sustaining progress will depend on the security situation, among other factors.

The Committee advised the Congolese authorities to sustain commitment and coordination on Ebola response and to strengthen community awareness and engagement.

Other recommendations include continued cross-border screening and monitoring at checkpoints around hotspots in the east, as well as scaling up preparedness in non-affected provinces.

"At-risk countries should maintain their work with partners to improve their preparedness for detecting and managing imported or locally acquired cases, including the transparent sharing of detailed information on suspect cases", said the experts, citing WHO norms and guidance.

Ebola virus disease is a rare but severe, often fatal, illness in humans.

An experimental vaccine, which proved highly protective during a 2015 trial in Guinea, is being used in the DRC outbreak.

DR Congo's Last Ebola Patient Discharged from Treatment Centre
Tagged:
Copyright © 2020 UN News Service. All rights reserved. Distributed by AllAfrica Global Media (allAfrica.com). To contact the copyright holder directly for corrections — or for permission to republish or make other authorized use of this material, click here.