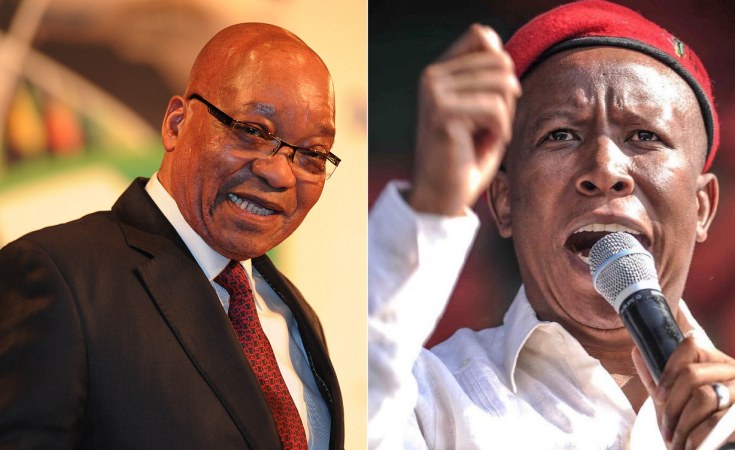 EFF leader Julius Malema believes that although former president Jacob Zuma must bring himself before a court of law on the charges he faces, he is too old to go to jail.

Speaking at the Cape Town Press Club on Friday, Malema, who was seen as a thorn on Zuma's side in his last few years as head of state, said he didn't necessarily believe the former leader should be jailed.

"If there are charges against him, he must go to court and answer to those charges," said Malema.

Zuma faces 16 charges of fraud, money laundering, corruption and racketeering linked to 783 payments that French arms company Thales allegedly made to him in connection with the infamous arms deal in 1999. It saw Zuma's former close associate Schabir Shaik sentenced to 15 years in jail for corruption.

Shaik was convicted of two counts of corruption and one of fraud, relating to his facilitation of a bribe, allegedly by the French arms company to Zuma.

After serving just over two years of his sentence, Shaik was released on medical parole on March 3, 2009.

"Jail time for an old person like that [referring Zuma] is not suitable. What kind of society have we become to jail such old people?" Malema asked.

On February 4, KwaZulu-Natal High Court Judge Dhaya Pillay acceded to a request from the State to issue an arrest warrant for Zuma over his non-attendance at his corruption trial.

Zuma's legal team had submitted documents to the court, saying the former president was ill and had not been in the country since January 23.

State prosecutor Billy Downer, however, requested information from the defence regarding Zuma's ailments, which they were yet to receive. The State also raised questions over Zuma's medical note submitted to the court.

The warrant has been suspended until his next court appearance in May.

"The purpose of jail is correctional, we correct you and send you back to society. What about Zuma is going to be corrected because he is an old man?" Malema asked, suggesting a different punishment might be more fitting.

During Zuma's presidency, EFF MPs, including Malema himself, consistently challenged the former president in Parliament, calling for him to pay back money from his Nkandla homestead security upgrades and for him to be jailed for corruption.

Following a Constitutional Court judgment in 2016 which ruled that Zuma had failed to uphold the Constitution by not complying with then Public Protector Thuli Madonsela's remedial action regarding payment for the upgrades to his Nkandla homestead, the EFF had went through great lengths to seeking parliament to take action against the him, News24 reported.

Last year, however, speaking after a church service at the Apostolic Faith Mission River of Life in Soshanguve, Malema said the sermon, which was about forgiveness had moved him to forgive the former president.

"I was even saying to the pastor that we've forgiven Zuma because of the sermon. So Zuma must thank the pastor, because we've got wisdom from the pastor," Malema said then.