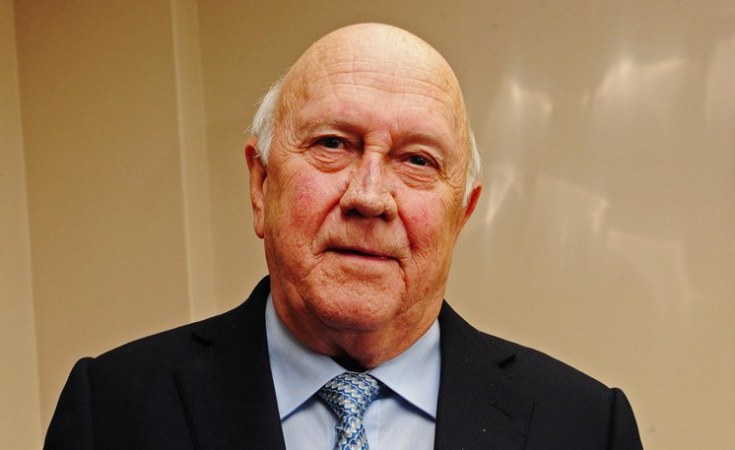 The ANC has added its voice to calls for the FW De Klerk Foundation to unconditionally retract its recent statement that apartheid was not a crime against humanity.

"At a time when the bonds of social cohesion are in greater need than ever of being strengthened, the utterances by the FW de Klerk Foundation also appear to be a clear and deliberate attempt to incite race hatred," said the ANC in a statement released by spokesperson Pule Mabe on Sunday.

The foundation this week said the notion that apartheid was a crime against humanity had merely been "soviet agitprop" - propaganda meant to agitate.

This was in response to what it called the EFF's "vitriolic attacks" on De Klerk.

News24 reported that, before President Cyril Ramaphosa could commence his State of the Nation Address on Thursday evening, EFF leader Julius Malema rose on a point of order, asking that De Klerk be removed from the National Assembly chamber's public gallery.

De Klerk was seated there with former presidents Thabo Mbeki and Kgalema Motlanthe.

Mabe said the ruling party had urged government leaders to tighten provisions around hate speech "and declare the denial of apartheid as a crime against humanity as a crime, as is done in other jurisdictions such as Germany where holocaust denial is not tolerated in any form".

"In the interests of advancing reconciliation and nation-building, the ANC calls on the FW de Klerk Foundation to unconditionally retract its irresponsible statement and start showing commitment to the building of a South Africa we all want."

He added that the United Nations had declared apartheid a crime against humanity.

"[It] has been well documented. The FW De Klerk Foundation, instead of continuing to plead blind ignorance, would do well to research this history."

"[De Klerk] wants to tell us it was propaganda of the Soviets. We want to say to Mr De Klerk, that this is an insult to the millions of people who have lost loved ones in the Sharpeville, Soweto June 1976, Boipatong massacres."