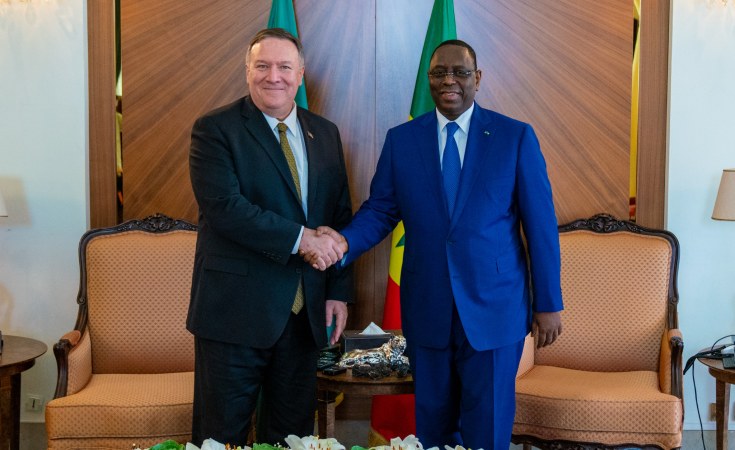 Dakar — Secretary of State Mike Pompeo wrapped up a visit to Senegal on Sunday, where he discussed the U.S. role in security issues in Africa.

This visit came as the U.S. Defense Department is conducting a global force review and has indicated there likely will be a reduction, but not a complete withdrawal, of U.S. forces from Africa.

"We did have a lot of conversation about security issues here, about America's role in those, we've made it clear that the Department of Defense is looking at West Africa to make sure we have our force levels right," Pomepo said during joint news conference with Senegal's Foreign Minister Amadou Ba.

"I'm convinced that when our review is done we'll have a conversation with not just Senegal but all  the countries in the region, we'll talk through why we're doing it, how we're doing it we'll deliver an outcome that works for all of us," Pompeo added.

Washington has obligated more than $106 million in security assistance to support Senegal's security institutions since 2014. The U.S., via the Departments of State and Defense, helps train and equip the Senegalese military and police to counter the evolving threats of regional terrorism and cross-border violence that spills over from the Sahel region.

During his visit to Senegal, Pompeo also held talks with President Macky Sall.

Ahead of Pompeo's visit, Sall said a drawdown of American troops from Africa would be a mistake, and it would be "misunderstood" by African leaders.
The United States is the largest bilateral health donor in Senegal, with approximately $60 million in bilateral health funding in 2019 to support maternal and child health, nutrition, and efforts to combat malaria and HIV/AIDS.

The next stop on Pompeo's trip to is Luanda, Angola before he moves on to Addis Ababa, Ethiopia. Pompeo will also visit Saudi Arabia and Oman before returning to Washington after his nine-day trip.

In Luanda, he will meet with President Joao Lourenco and Foreign Minister Manuel Augusto to reaffirm U.S. support for Angola’s anti-corruption and democratization efforts.

In Addis Ababa, Pompeo will meet with Prime Minister Abiy Ahmed and President Sahle-Work Zewde to discuss joint efforts to promote regional security and to support Ethiopia’s political and economic reform agenda. Additionally, he will meet with African Union Commission Chairperson Moussa Faki Mahamat and give a speech.

The chief U.S. diplomat began his trip at the Munich Security Conference in Germany, where he met with a number of foreign leaders, including Afghanistan’s President Ashraf Ghani. A senior State Department official told reporters a reduction in violence deal has been reached with the Taliban, although the terror group needs to show it can deliver on throttling back the suicide bombings and rocket attacks.

U.S. Hails Senegal as 'Anchor of Democracy' in West Africa