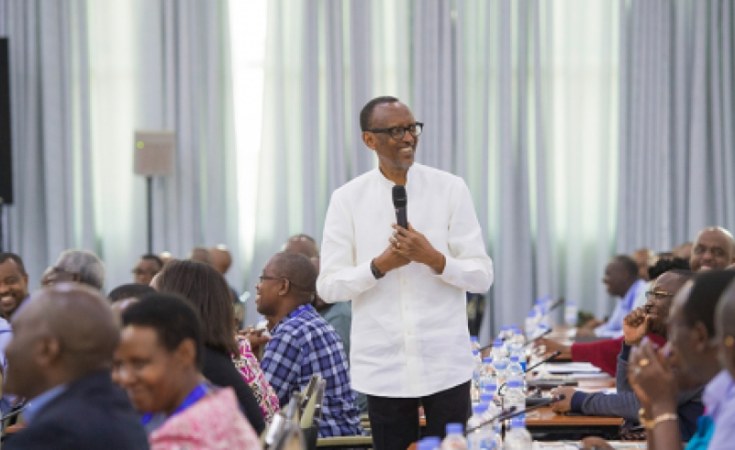 Village Urugwiro/New Times
President Kagame addresses leaders at the 17th edition of the National Leadership Retreat at the Rwanda Defence Force Combat Training Centre in Gabiro, Gatsibo District where he tipped them on values and character.
The New Times (Kigali)
By Julius Bizimungu

President Kagame cautioned Government officials against treating their jobs and institutions they run as if they own them.

President Paul Kagame on Sunday cautioned leaders who regularly fail to deliver on their responsibilities that it was fundamental to uphold the right values and character if they are to fulfil their duties.

He was speaking at the opening of the 17th edition of the National Leadership Retreat, also known as Umwiherero, at the Rwanda Defence Force Combat Training Centre in Gabiro, Gatsibo District.

The retreat brought together more than 400 leaders including the First Lady, central and local government, parastatals, private sector and youth representatives from different sectors.

The Head of State rejected the idea that everything the country has failed to achieve is a result of lack of skills or resources.

The President cautioned the government officials against treating their jobs and institutions they run, as if they own them. He reminded them that they are public servants and should work in the interest of Rwandans. And, if they feel, they can not deliver, they should be honest enough to admit they need to step down.

While the country has made a lot of progress over the last 17 years, Kagame said, there was a lot more that needs to get done to deliver the country's transformation goals.

While the President strongly criticized leaders for repeated cases of misconduct and negligence, he urged the younger audience against following a similar path.

"It's never too early to be responsible and mature to understand the strategic objectives of our country," he added.

Kagame highlighted scenarios where leaders failed to deliver on their responsibilities.

"When we experienced problems with our Ugandan neighbors, some of our people grieved. I learned that citizens had been driven to access basic services like health, education and other services from our neighbor," he said.

"The situation made us look at things in a different lens. But the truth is, we had not failed to have these services, we had just abandoned our people," Kagame pointed out.

Despite the challenges Rwanda has faced, Kagame highlighted that the country's economy continued to grow.

In the past two years (2018 and 2019), the Head of State indicated that Rwanda achieved strong growth compared to previous years.

Rwanda's economy grew at 10.9 per cent in the last three quarters of 2019, driven by different sectors, notably services, industry and agriculture.

The President challenged the private sector to even think bigger and do more to grow their businesses.

Kagame insisted that Rwanda is at a critical stage where leaders cannot afford to sit and just watch.

The conversations on the first day revolved around what the country needs to achieve Vision 2050 - 30 years from now.

Prime Minister Édouard Ngirente said that it will require making strategic investment, efficient use of public resources, and working together to achieve that vision.

He stated that this year's retreat will allow leaders to chart a new chapter of growth for the country.

"We see this gathering as a platform to examine ourselves. We also see it as an avenue to question those who didn't deliver, but also chart a way forward," he said.

According to the Premier, 43 activities out of 57 that were adopted from last year's retreat were being implemented.

However, he admitted that the government was lagging behind when it comes to investing in education and correcting mistakes in health sector.