Kenya: Rotting From the Deep - The Tragedy That is Lake Victoria 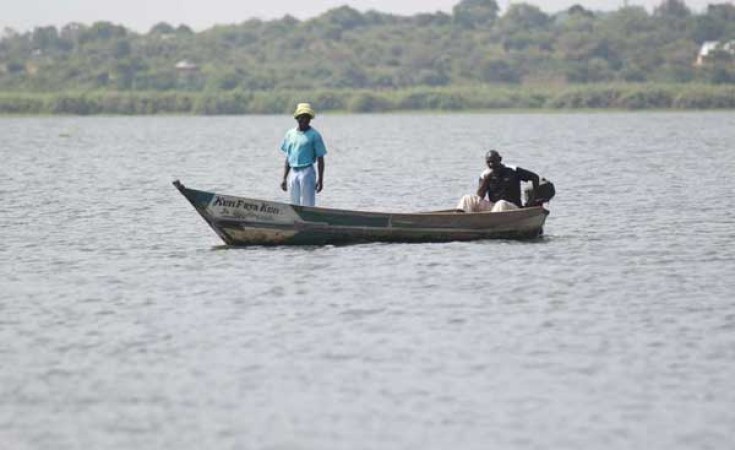 River Kisat moves in surges, pricked from beneath by numerous inlets flowing into it from Kisumu City and its environs. Each inlet carries a different concoction of poison.

The river notoriously leaves a nauseating stench behind it that hangs over the air everywhere it passes. On a normal day, it is dark, thick and drags within it all manner of filth, a health hazard in motion.

No river in the Lake Victoria region carries more of the burden of a dilapidated and broken sewerage system than Kisat.

Grudgingly, it snakes through the populous Obunga slums, past Kisumu’s industrial area where fish processing factories, motor vehicle garages and other factories unleash effluent into it.

It accelerates with each slope as it races towards Lake Victoria. As if rushing for freedom, to escape further pain and destruction, it meanders through the final four-kilometre journey of its existence, collecting raw sewage from toilets and back channels of estates and city buildings.

The weight of the sludge within it pushes it on from behind. It hurries further down, gushing beneath the last bridge on the busy Kisumu-Busia highway, not too far away from the Kisumu International Airport.

Shortly after the bridge, it becomes still and silent as it slithers through Nyanza Golf Club, past a creaky wooden footpath, as if not to alert golfers that it was passing by, before it is embraced by the calmness of Lake Victoria.

As it meets the lake at its mouth, River Kisat forms a big brown bowl in the lake, the size of a basketball pitch. The filth in it separates it with the green oily waters in front of it. The final hurdle it has to confront is a green layer of an interwoven carpet of water hyacinth awaiting it. This is before it i s completely swallowed up by the lake and its miserable life forever put to an end.

It is impossible to imagine any waste from Kisumu that does not end up in Kisat.

Ironically, River Kisat also carries poison from the Kisumu Water and Sewerage Company (Kiwasco). Instead of cleaning waste from factories feeding into it, Kiwasco is part of the polluters sucking life out of the world’s second biggest fresh water lake.

As it pollutes the lake from one side, the water company is pumping the same water out of the lake, several metres away. This polluted water is what it struggles to treat and sell to hundreds of thousands of residents in the region.

Kiwasco represents just what is wrong with Lake Victoria.

Not very far away from River Kisat is Kodiaga Maximum Security Prison. Here, the prison does not even try to hide that Lake Victoria is its toilet for the 3,000 inmates and remandees behind its rusty gates.

The prison relentlessly emits raw sewage into River Saka in broad daylight. Downstream, before the contaminated water ends up into the lake, residents are fetching it for drinking and other household uses.

Kodiaga Prison’s wastewater lagoons do not work. Its sewer lines overflow during rainy seasons and end up in River Saka, which dutifully transports it to the lake.

The prison uses a sewerage system built in the 1950s by the colonial government. It functioned until some time in 2008 when it broke down. Ten years later, the government has never found enough money to build another system.

These are not the only offenders that have led to the increasing expanse of the algal bloom in the Winam Gulf of Lake Victoria.

Then there is Maseno University, an institution of higher learning that boasts being the only one on the equator, but lacks a wastewater treatment system. It allows its sewage from thousands of students to pour into open land, then to a nearby stream.

Then there are agro-based industries, bottlers, breweries, and sugar manufacturers releasing poorly-treated effluent. All of them boast of state-of-the-art treatment plants that have won numerous awards. But the situation on the ground tells a different story. Most don’t pre-treat their waste to the required standards before pumping it into Kiwasco’s waste system.

Given their financial might and the need to support industries, Kiwasco’s warnings are routinely ignored. After some point, it gets overwhelmed, and decides to do the unimaginable. The water company is forced to release back into the lake effluent heavy with ammonia, pesticides, heavy metals and poorly-treated sewage with bacteria and other disease-causing chemicals.

Afterwards, it sits back and hopes that the fresh water lake will somehow dilute it, and get the problem out of its hands.

But the lake has had enough. The poison is being handed down its throat at a rate that is faster than it can disperse, dilute, decompose, recycle or store in harmless form.

The poison in the fish

Fish samples collected at different sections of the lake were found to have various levels of heavy metals and pesticides.

Among the heavy metals found in the fish were lead, cadmium, chromium, zinc, iron, copper and manganese. But not all samples had these metals at poisonous levels, thankfully. Fish from Marenga Beach in Kenya, Masese and Gabba in Uganda and imports from China, were found to have lead at levels far above the recommended minimum. A fish sample obtained at Dunga Beach had mercury at levels beyond the recommended minimum.

On pesticides, 19 different types were found in the fish from Lake Victoria and its catchment basin. The pesticide with the highest levels was phenothrin, while the most common was pyridaphenthion, found in 80 per cent of the samples. Sadly, there are no guidelines on minimum levels for these pesticides.

The Story Behind 'Rotting From the Deep''

Kenyans Eating Toxic Fish From China
Tagged:
Copyright © 2020 The Nation. All rights reserved. Distributed by AllAfrica Global Media (allAfrica.com). To contact the copyright holder directly for corrections — or for permission to republish or make other authorized use of this material, click here.