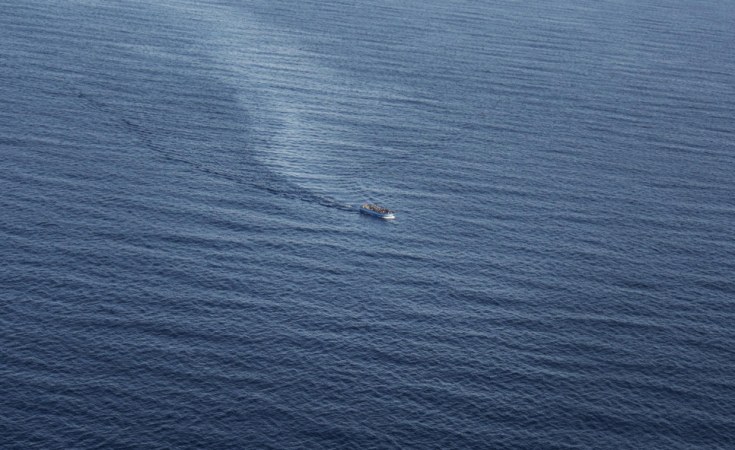 Alfredo D’Amato/UNHCR
A boat packed with people is spotted in the Mediterranean Sea from an Italian rescue helicopter in June 2014.
Deutsche Welle (Bonn)

The bloc has agreed to monitor a UN arms embargo, which is routinely flouted. The naval element had been a sticking point for some countries because of the possible incentive for migrants looking to reach Europe.

EU foreign ministers on Monday agreed in principle on a new mission - which would include naval assets - to monitor Libya's UN arms embargo, German Foreign Minister Heiko Maas said. It was later confirmed by his Italian and Austrian counterparts.

"We all agreed to create a mission to block the entry of arms into Libya," said Italy's foreign minister, Luigi di Maio.

Monday's decision includes measures to address concerns that the presence of European ships in the Mediterranean Sea would create a "pull factor" for migrants looking to reach the European Union from Libya.

The new mission will replace Operation Sophia which was initially launched in 2015 to stop human trafficking from North Africa to Europe, while also enforcing a UN arms embargo.

Operation Sophia collapsed in March 2019 under pressure from Italy's former populist government due to disagreements about distributing the people who were plucked from the sea.

The bloc's foreign ministers had been exploring ways to uphold a formal cease-fire in Libya and had concluded that any peace deal would need EU support to make it work.

Details of the new mission will be finalized in the weeks ahead, however it is expected to have three levels: "in the air, satellite and maritime," according to Luxembourgish Foreign Minister Jean Asselborn.

Should the EU's foreign policy chief, Josep Borrell, consider that migrants are being drawn toward the mission in hopes of being picked up, the "maritime assets will be withdrawn from the relevant area," Asselborn said on Monday.

"A cease-fire requires someone to take care of it," Borrell, said last month.

You cannot say, 'this is a cease-fire' and forget about it ... Someone has to monitor it, to manage it."

Borrell also said the EU's naval mission off the Libyan coast could be "revived."

A cease-fire in Libya was initiated by Turkey and Russia in mid-January. European Commission President Ursula von der Leyen cautioned that the United Nations should lead the process of rebuilding war-scarred Libya.

"A cease-fire, yes it is a first step in the right direction, but what you need is a process of consolidation, of reconstruction and a government of unity," von der Leyen told reporters last month after a meeting with Luxembourg Prime Minister Xavier Bettel.

"There is a long way to go. This has to be a UN-led process. This is of utmost importance."

Earlier in January, Italy's foreign minister said that Libya posed a security risk to Europe that the European Union must address.

"Libya at the moment poses a risk to Europe on migration and also on terrorism," Luigi Di Maio told reporters following a meeting with his British, French and German counterparts.

At a Libya summit in Berlin, the EU had vowed to do whatever was necessary to implement a United Nations arms embargo and any ceasefire.

What is the Libya conflict?

Since the overthrow of long-standing ruler Moammar Gadhafi in 2011, Libya has been in a state of flux. The UN-recognized Government of National Accord (GNA) under Prime Minister Fayez Sarraj holds the capital Tripoli, but since last April, it has been under sustained attack by rebel general Khalifa Haftar's Libyan National Army (LNA), which is supported by a rival administration based in the eastern city of Tobruk.

Every evening, DW sends out a selection of the day's news and features.