East Africa: What Next for the EAC Chairmanship? 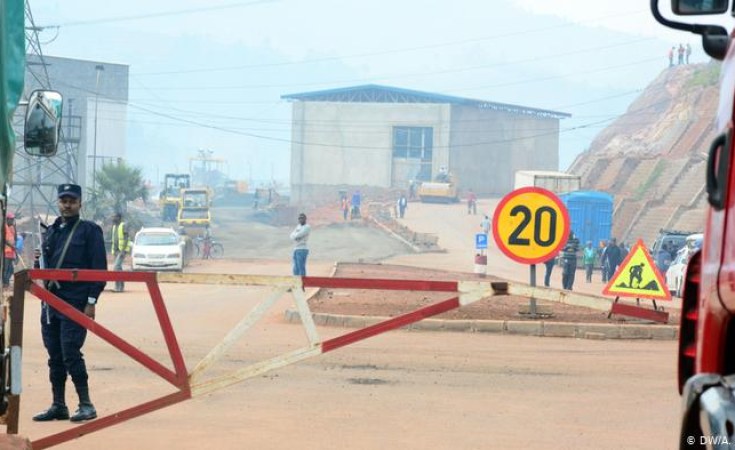 Photo: A Gitta/Deutsche Welle
The Katuna border crossing between Uganda and Rwanda - a dispute between the two countries has resulted in border closures lasting several months
The Independent (Kampala)
By Ian Katusiime

Kampala, Uganda — The next East African Community (EAC) Heads of State Summit is scheduled for Feb. 28 and it is expected that Rwandan President Paul Kagame who has had a tumultuous term as chair will handover to a successor.

When the EAC leaders hopefully gather in Arusha, Tanzania, they will have to choose among John Pombe Magufuli of Tanzania, Uhuru Kenyatta of Kenya, or even Salva Kiir of South Sudan on who can take the reins of the complicated six-member bloc.

The summit was initially scheduled for November 2019 when it was cancelled due to tensions among member states.

Tanzania requested the postponement citing busy schedules but the frosty relationship between President Yoweri Museveni of Uganda and Kagame who was EAC chair made deferral of the summit welcome.

Whenever it takes place, the next summit will have no shortage of issues to deal with; the hard-to-read dispute between Museveni and Kagame, the timeline for the formation of a unity government in South Sudan (the deadline expires on Feb. 22), the upcoming presidential elections in Burundi as President Pierre Nkurunziza who steps down in May has had frosty relations with other EAC members.

He has not attended any EAC summit since 2015 when coup plotters almost snatched the crown from him while he was attending EAC business in Arusha, Tanzania. EAC leaders may want to forge a relationship with the next Burundian President for the sake of harmony in the fragile community.

Julius Maganda Wandera, the minister of state for East African Affairs told The Independent that there has been no communication so far from any member state regarding cancellation so plans are underway for the summit.

However for various reasons, the summit could be postponed again. "The Presidents can agree among themselves for the chair to serve another term," Wandera said. He cites the time Museveni became EAC chair in 2017 because Kenya then had an election year and Museveni stayed on as chair in 2018 because Rwandan President Kagame was chairing the African Union that year.

"The summit has to take place within November and February according to the law. If it doesn't, there has to be an Extraordinary Summit in April," Wandera told The Independent.

Wandera says as for now, the six EAC members; Uganda, Kenya, Tanzania, Rwanda, Burundi, South and Sudan will dispatch technical teams to Arusha on Feb. 20 followed by the Council of Ministers on Feb. 24.

The summit will happen without a clear path towards resolving the fallout between Museveni and his former comrade Kagame. At the time of the summit, it will be one year since Rwanda closed its border with Uganda. There has been criticism of EAC leaders trooping to Angola to have their differences resolved with some observers casting it is a damning indictment on the capability of the 20-year-old EAC.

A ray of hope from the second quadripartite summit held in the Angolan capital Luanda has seen Ugandan and Rwandan officials organise a meeting between the two leaders set for Feb.21 at Katuna, the Rwanda Uganda border post. The meeting in Luanda on Feb. 2 was attended by Angolan President Joao Lorenco, Felix Tshesekedi, the president of Democratic Republic of Congo (DRC), and Museveni and Kagame.

The Ugandan delegation in preparation for the Katuna meeting was headed by the Works and Transport Minister, Gen. Katumba Wamala and from the other side, the team was led by Wamala's Rwandan counterpart, Claver Gatete. The group met at Katuna with local districts officials on Feb. 7.

It remains to be seen what the meeting will resolve. However Julius Maganda, the minister of East African Affairs told The Independent that the Katuna meeting between the two leaders can easily be readjusted.

The two presidents have been chastened for not doing enough beyond the rhetoric of issuing public statements aimed at resolving the stand-off.

Currently, the negotiations to end hostilities between Rwanda and Uganda look like a hamster wheel pursuit. Just days after the two countries released prisoners in reciprocal moves, there was the killing of Teojen Ndagijimana, a Ugandan national by Rwandan authorities on Jan. 18.

Ndagijimana was a resident of Kabingo Village, Murora Sub-county in Kisoro District. He, together with two Rwandans Erike Biizimana and Emanuel Mbabazi, were killed at Kumugu Trading Centre, about 3km inside Rwanda as they allegedly smuggled tea leaves from Uganda into Rwanda.

On other matters EAC, the Rwandan government complained about Kahinda Otafiire as an anti-Rwanda agent, a source told The Independent. When Museveni reshuffled his cabinet last December and put Kahinda Otafiire in charge of EAC, some interpreted it as a slap in the face to the dialogue between the two countries. Otafiire could be not reached for comment.

In addition, Philemon Mateke, the minister of state in charge of regional affairs has also been a subject of attacks by Rwandans on Twitter who accuse him of supporting Rwanda rebels. Mateke in a statement denied having the capacity to support rebels.

Over the weekend of Feb.8-9, Museveni and Kagame were in Addis Ababa, Ethiopia for an African Union summit themed 'Silencing the Guns: Creating Conditions for Africa's Development'. The meeting was aimed at achieving a conflict-free Africa.

On the sidelines of the AU summit, the Inter-Governmental Authority on Development (IGAD) held its 34th Extraordinary summit of Heads of State and Government under the chairmanship of Abdalla Hamdok, the Prime Minister of Sudan.

Top on the agenda of the IGAD meet was the peace process in South Sudan whose failure to form a unity government vexes EAC leaders. The conflict that erupted in 2013 has claimed an estimated 500, 000 lives and displaced over two million people creating a refugee crisis in the EAC region.

Museveni and South Sudan President Salva Kiir attended the summit and a communique from IGAD noted in passing the progress made in the implementation of tasks during the 100-day extension period to form a government of national unity in South Sudan. The extension was made in November. IGAD also took note of the fast approaching deadline for leaders of South Sudan to form a unity government.

The IGAD meeting also attended by the President of the Federal Republic of Somalia Mohamed Abdullahi Mohamed noted that "further extension is neither desirable nor feasible at this stage of this peace process." Mahmoud Ali Youssouf, Minister for Foreign Affairs in Djibouti; Raychelle Omamo, Kenya's secretary for foreign affairs and Hirut Zememe, Ethiopia's state minister for the Federal Republic of Ethiopia also attended.

By the time the EAC summit happens, IGAD expects the leaders of South Sudan; Salva Kiir and Riek Machar, former vice president and leader of opposition, to have formed a government of unity which is by Feb. 22. IGAD comprises Djibouti, Eritrea, Ethiopia, Kenya, Somalia, South Sudan, Sudan and Uganda.