Kenya: How Lake Victoria is Choking on Filth

To understand the magnitude of the pollution in Lake Victoria, one must travel its length and breadth.

Its greatest length from north to south is 337 km, while its greatest breadth is 240 km. Its coastline exceeds 3,220 km.

In some of its worst areas, the lake vomits the debris of plastics and other non-biodegradable waste back onto the nearby banks. Fishermen know what is going on. More than 12 fish species have disappeared. They simply cannot survive the poison. Only the Nile Perch, which is adapted to surviving in heavily polluted waters, remains the easiest find on the lake.

Inevitably, this has resulted in the deadly fights between Kenyan fishermen and Ugandan forces, as they fight for their survival by fishing in their waters. Those who cannot endure the fights anymore have retired. They now use their boats for sand harvesting, destroying the remaining beaches on the lake.

The government first built the Kisumu Port as part of the blue economy agenda it is pushing. Then went back to do an environmental impact study of what the project will do to the lake and its environment — a classic case of putting the cart before the horse. The environment can wait. Why the government was in so much hurry to slap the environment in its face, no one knows.

Somewhere inside the lake, there are other polluters. Currently, cage farming is the in-thing. Cages are mushrooming on the lake day and night. There are at least 4,000 cages on the lake owned by about 60 firms. Some of the feeds being sprinkled on the cages go to the bottom to further nitrify the lake and act as fertiliser for the invasive hyacinth. When it is in season, the hyacinth weed expands to cover about 1,400 hectares every day.

Then there are rivers that flow from as far as the Mau, Kericho, Mount Elgon and Nandi escarpments in the Rift Valley into Lake Victoria. Others pass through tea plantations and rice farms that use numerous chemicals. Just like Kisat, they are not always clean.

For instance, Nzoia River carries waste from the Rai Paper mills in Webuye. Then there is Kibos River, which endures the effluent from Kibos Sugar. Nyando River has the notorious Agro-Chemicals and Food Company, a repeat offender, to deal with.

The county governments in the region know where the problem is. From Migori to Kisumu and Busia, they know what impact the pollution is having on their population.

Instead, they have turned the hyacinth menace into a cash cow. A reason to make more proposals to international donors to attract billions of shillings in funding. Then retire back to the comfort of their air-conditioned offices and take half-hearted measures to end the menace. Some of the equipment bought by donors is rotting in yards. It is an open secret. The hyacinth is a godsend for bureaucrats. Clearly, its eradication is a money minting venture.

In Uganda, the situation is no different. Given, the military deployed by President Yoweri Museveni has helped slow down the pollution. But when you visit the Nakivubo channel, which is a stone’s throw-away from the capital Kampala, you will come face to face with the ugly face of pollution.

After Nairobi River, the Nation shifted its gear to Lake Victoria, Africa’s biggest lake. It is also the second largest freshwater lake in the world, only beaten to the top spot by Lake Superior in North America.

At its best, the giant lake, whose original name is Nam Lolwe, had more than 200 species of fish, of which the Tilapia is the most economically important. Its basin covers 238,900 square kilometres.

In this investigation, we found loads of insecticides, acaricides and herbicides that should never be found in drinking water, according to the World Health Organisation (WHO). We also found pesticides that were banned in 2001 still flowing into the lake.

In our second part of the Toxic Flow series, we picked 54 samples at 28 locations on the lake, rivers and effluent discharges from factories in the region. We also bought fish samples imported from China and flew them to Nairobi for testing.

Today, pollution has been linked with the increase in the prevalence of diseases like cancer and immunosuppression.

Communities around the lake are also aware of what is ailing them.

For example, gold miners in Migori were aware that their activities introduce mercury as a pollutant. Industries, including those making sugar, breweries and paper, may be contributing to the pollution.

The team evidenced polluted water passing through areas that exposed the community. This included residential and recreational facilities, including the Nyanza Golf Club.

We went back for a second phase of sampling this time covering Jinja, Nzoia River at Panpaper and Marenga beach. The sampling points picked represent the major anthropogenic activities along the lake such as industrial, markets and agricultural.

We recorded GPS coordinates of every sampling point using a smart phone. At every sampling point, the water samples were aseptically obtained in two pre-sterilised water-sampling containers for microbial quality. We also had an extra sample in another plastic container for physiochemical analysis.

We collected water at various depths, including the lake surface and mid-lake depth, while sediments were obtained at the shallow rivers’ mouth and the deep lake.

We then transported the samples in cool boxes to a deep freezer for storage before analysis. We flew some of the time sensitive samples to Nairobi to beat the testing window.

At every sampling point, the pH and temperature of the river and lake water were obtained ''in situ''. The microbial water quality was analysed within six hours of sampling and results recorded. Physiochemical analysis was carried out at the university lab after all the samples were obtained. Sediments and fish, where available, were also sampled and chemicals analysed.

Migori River carries all the mercury from the gold mines and offloads it into the lake.

Here, impoverished gold miners wake up every day to go to the mines.

Every day, without proper gear, they use mercury to ''clean'' their gold find and the waste flows downstream into the lake.

Their hands tell the story of hardship as the deadly chemicals tear their muscles and cause fresh little wounds every day.

The money they make far supersedes the pain. Besides, they have never seen anyone die of mercury poisoning.

In fact, many miners swear that the chemical cannot kill.

The Story Behind 'Rotting From the Deep''

Save Lake Victoria From Looming Death 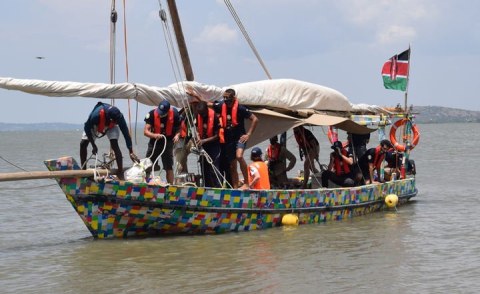