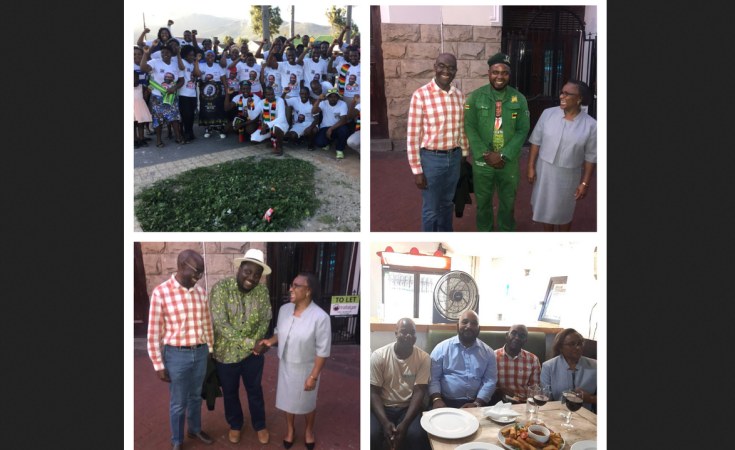 Cape Town — On Friday the 14th of February, His Excellency, David Hamadziripi, Ambassador to the Republic of South Africa made time to meet with the ZANU PF Capetown District, to hear their concerns and give a brief on the state of the nation.

The meeting was timely and the first since the appointment of the new Consular General in Capetown, Mrs. Esther Tonderai Mudambo who when she took the stage, applauded comrades for working well with her office so far. She also noted with pleasure that the second dispensation is tasked with improving lives of Zimbabweans despite having hurdles such as sanctions in the way.

In his briefing on the state of Zimbabwe, Ambassador Hamadziripi informed and encouraged comrades gathered to work and walk together with President Mnangagwa as the theme for this year is production. '2019 was a year for austerity, as we were fixing the fundamentals of the economy, this year The President has called for Production, so let us not sit on our hands,' he said. Further encouragement was given for comrades to work together and invest back home. He urged comrades not to be narrow minded when looking into the Agriculture Sector, but to seek opportunities to invest in other stages of the value chain, pre and post farming.

Ambassador Hamadziripi encouraged the comrades to remember their families back home in light of the drought and floods that Zimbabwe is facing which may lead to further food insecurity. Indicating that though the government is doing its best to alleviate the food shortages, everyone needs to put their hands on deck.

While affirming that Zimbabwe is politically stable, he warned against misinformation making rounds on Social Media. 'The President said you were Ambassadors of The Party at the last People's Conference, today I want to take it further and say, you are Ambassadors of our country. Distribute reliable information as you receive it, so that we counter the deliberate lies being spread to cause mass disruption.'

Ambassador Hamadziripi, noted with great concern the issues raised on accessibility of Zimbabwean documentation and highlighted that it saddens The Embassy, which is in conversation with various Zimbabwean Government departments to find ways of tackling the issue. He also resolved that efforts in negotiating with the South African Government in regards to Study and Work Permits would continue until an amicable solution is found.

In response to the outcry against corruption, Ambassador Hamadziripi implored comrades and the rest if Zimbabwe to be patient as ZACC is building capacity. 'The President is seized with this matter, he is paying close attention to it. While efforts are being made to capacitate and improve ZACC, citizens ought to take all the evidence they have there and be assured that every case will in time be dealt with accordingly.'

In conclusion the Ambassador said, 'We are going through a hard phase of rebuilding the country and as we all know, building is not easy, but if we work hard and persevere we will make it.'

Tagged:
Copyright © 2020 Zimbabwe African National Union Patriotic Front. All rights reserved. Distributed by AllAfrica Global Media (allAfrica.com). To contact the copyright holder directly for corrections — or for permission to republish or make other authorized use of this material, click here.