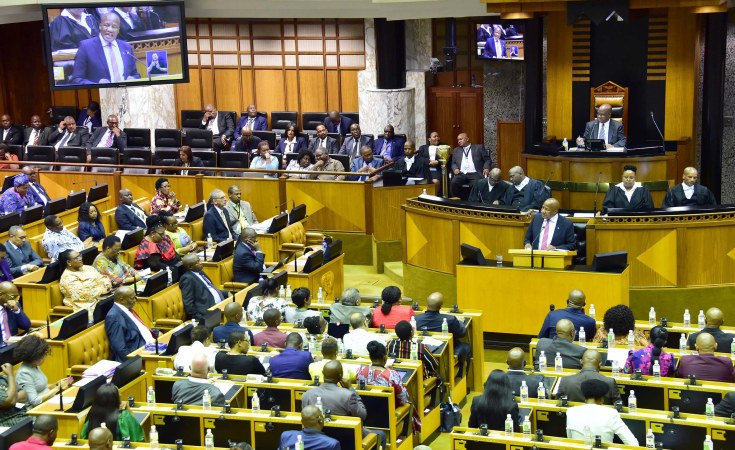 Photo: GCIS/Flickr
Parliament hosts the debate on the State of the Nation Address in Cape Town on February 18, 2020.
News24Wire (Cape Town)
By Jan Gerber

The debate on President Cyril Ramaphosa's State of the Nation Address (SONA) descended into a shouting match in the National Assembly after an ANC MP accused EFF leader Julius Malema of domestic violence.

As Malema made his way to the podium, following Minister in the Presidency Jackson Mthembu, National Council of Provinces chairperson Amos Masondo said the EFF had 42 minutes of the debate allotted to them.

While Malema had 20 minutes on the schedule, he could speak for the whole 42 minutes if he chose. The EFF MPs cheered.

As Malema got into his speech, ANC MP Boy Mamabolo asked him a question. He wanted to know his thoughts on gender-based violence.

Mamabolo said MPs had taken an oath to combat gender-based violence. He then accused Malema of having domestic abuse issues "at your house".

"My question to the honourable Malema is this: Gender-based violence is happening at your house. The matter has been dragging on for too long. Members of the EFF, instead of condemning the issue, decided to crack a joke. They decided not to engage the matter [last Thursday at SONA].

"You are abusing your wife. We want you to stand here in front of the nation. If the matter is true, are you going to apologise?

"My question to you is, are you abusing your wife?"

He provided no evidence for his claims.

Malema did not respond and continued his speech.

Several ANC MPs repeated the question because an EFF MP had thrown a water bottle at a female MP when they left the chamber on Thursday evening. They wanted him to answer the question there and then.

"No one is going to tell me what to do, at what time. I'm in charge," Malema said. "I've got the ruling party by the scrotum."

With ANC MPs yelling at him, Malema said: "The caucus of the ANC has collapsed. Hahaha. I'm in charge."

After more points of order by ANC MPs, he added: "I'm standing here so I can irritate you. I'm running the House."

Masondo responded: "Honourable Malema, you're not running the House."

Malema continued his speech, saying said ANC members were afraid to criticise former deputy president and final apartheid president FW de Klerk because he would release their service numbers because they were spies.

"You were spies and you are scared! You are impimpis."

He also praised Deputy President David Mabuza. "It looks like the deputy president has something to offer."

He eventually turned to Mamabolo's question, saying he had never raised his hand to his wife. He added he had no history of abuse, only a history of love.

He then claimed he had information that Ramaphosa had beaten his former wife, the late Nomazizi Mtshotshisa. He too gave no proof.

Ramaphosa stared at him expressionless as he did much of the speech.

Amid much yelling from the ANC, Malema continued with his accusations, claiming former president Jacob Zuma could confirm it.

Masondo asked Malema to withdraw his remarks. He refused.

He left the podium and the chamber, with EFF MPs falling in behind him, yelling at the other MPs, with EFF MP Primrose Sonti calling someone Satan.

Modise and Masondo have referred the EFF MPs to both houses of Parliament's powers and privileges committees.