Niger's Chance for a Democratic Transition of Power 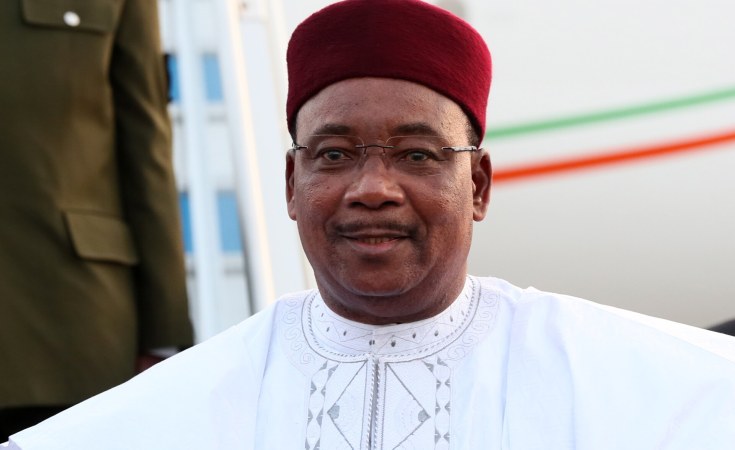 2020 will be the last year in office for Niger's President Mahamadou Issoufou. Analysts expect the power transition to be peaceful and in accordance with the constitution, despite the regime's authoritarian proclivities.

President Mamadou Tandja had refused to step down after two terms, as stipulated in the country's constitution. He first took office in 1999 and was re-elected in 2004. Instead of obeying the constitution, he then went on to dissolve parliament and the constitutional court, simultaneously organizing a referendum on the possibility of a third term for himself. But he had not expected the reaction of the civil society and the Nigerien opposition, who boycotted the referendum and parliamentary elections and denounced Tandja's actions as illegal. In the end, the military intervened and ousted Tandja.

"The military coup in 2010 was inevitable, too great was the opposition to the unconstitutional extension of the mandate of then-President Tandja Mamadou," Niger expert Sebastian Elischer told DW. The GIGA Institute of African Affairs researcher says that the events of ten years ago still reverberate in Niger today. The political situation in the Sahel country remains confusing. The military is still an important political actor, Elischer says.

To what extent has the political culture in Niger changed under Mahamadou Issoufou, who was elected president in 2011 on the ticket of the Nigerien Party for Democracy and Socialism (PNDS)? "Many of the authoritarian reflexes that Mamadou Tandja had ten years ago are still noticeable today," says Klaas Walraven of the Centre for African Studies in Leiden, the Netherlands. Mamadou Issoufou is also showing an increased tendency towards suppressing the opposition. The way Issoufou's rival Hama Amadou was treated in the last elections is an expression of this authoritarian attitude, Walraven said.

Opposition leader Hama Amadou, who ran for the presidency in 2016, was arrested in November of 2015 on suspicion of child trafficking. He had to conduct his election campaign from prison. Incumbent Issoufou won the 2016 runoff election with 92 percent of the vote because the opposition boycotted it. The accusations against Amadou and other opposition politicians have repeatedly caused outrage in the West African country.

An excuse to persecute the opposition

Despite strong protests from the population, the government is firmly in power and can count on a parliamentary majority behind it - "albeit partly through intimidation and corruption," according to Niger expert Sebastian Elischer. Leaders of human rights organizations and NGOs have been arrested and thrown into prison on charges of working for Boko Haram. "The fragile security policy situation is deliberately used by the government to take action against critics," said Elischer.

Nevertheless, Elischer considers the country to be more politically stable today than ten years ago. An intervention by the military is unlikely at present. "Previous coups occurred in times of great economic and political instability, and this is not the case now. Niger may have an enormous amount of new debt, but it receives large sums of money every year because it has become one of Europe's main allies in the fight against illegal immigration and terror in West Africa," he said.

A staunch ally of the West

With the help of Western resources and a pragmatic view of the presidency, Niger has managed to remain stable in geography where state failure and security crises run rife, Elischer said.

"What is really new is the massive military support by the Western world for the regime of Mahammadou Issoufou in the fight against Boko Haram and the Islamist groups in the west of the country," confirms Klaas Walraven. In recent years, Issoufou's campaign for Western support has been extremely successful.

The president cleverly exploited the geographical location of his country as a transit area for terrorists, human traffickers, and economic and climate refugees from West Africa, Walraven continued: "Issoufou was very adept at playing the card of the good ally of the Western world. And the military successes are more or less noticeable," he said. Niger has managed to maintain military control over its immense territory in an extremely difficult security policy environment.

Issoufou to step down but not back

Although Issoufou has emerged strengthened from this crisis, he will not block the political change, said Walraven: "He remembers quite clearly what happened to his predecessor Tandja, and I firmly believe that he will indeed hand over power. But the president is keeping a back door open: "Issoufou wants to install someone who will protect him and his interests even after he steps down."

Mohamed Bazoum has a good chance: Niger's current Interior Minister, who is also chairman of the ruling PNDS, has been nominated the party's candidate. With Issoufou's backing, he could become the next president of Niger.