Grammy-nominated musician, Burna Boy, lost out on the much-coveted Best International Act at the 40th edition of the BRIT awards 2020 to American rapper, Tyler The Creator.

This may be hard on him after just losing another major international award. The singer, last month, was beaten to the award for Best World Music by Angelique Kidjo at the 2020 Oscars Grammy Awards.

As with previous years, the entire two-hour show was broadcast live on British TV and streamed globally on YouTube, monitored by PREMIUM TIMES.

This year also saw a welcomed reduction in the number of celebrities and sports stars giving out awards, with a steady stream of music acts such as Niall Horan and Paloma Faith, instead, taking their place on the podium.

The British Phonographic Industry has also "revamped" the award categories for this year's ceremony.

Many award categories have been renamed and repealed, cutting down the number of awards from thirteen to nine. The Brit Awards will no longer be supporting fan voting and will aim to start "giving artists' complete artistic control over their performances".

Outstanding Contribution to Music Award and

Below is a full list of categories and winners (in bold) at the 2020 Brits Awards:

Stormzy – Heavy Is The Head

Bring Me The Horizon

Lewis Capaldi – Someone You Loved-Winner

Mabel – Don’t Call Me Up

Mark Ronson ft Miley Cyrus – Nothing Breaks Like A Heart

Tom Walker – Just You And I 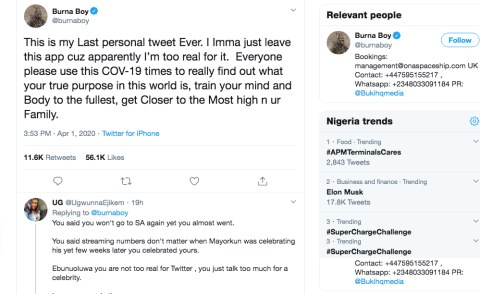 Here's Why Nigerian Artist Burna Boy Is Leaving Twitter
Tagged:
Copyright © 2020 Premium Times. All rights reserved. Distributed by AllAfrica Global Media (allAfrica.com). To contact the copyright holder directly for corrections — or for permission to republish or make other authorized use of this material, click here.