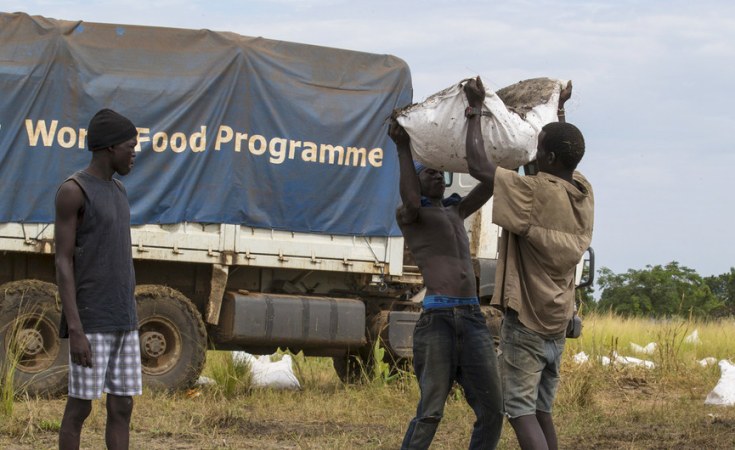 UNMISS
The United Nations has been providing food aid to hungry South Sudanese over a period of many years.
Voice of America (Washington, DC)
By Lisa Schlein

The U.N. estimates more than 50,000 people have been killed and around four million have been displaced both internally and as refugees since the country erupted in conflict in December 2013.

Commission member Andrew Clapham, says more than 55 percent of the population, mainly women and children, do not have enough to eat because the warring parties are preventing aid agencies from reaching them.

He says this is being exacerbated by climate-related factors and large-scale displacement.  He notes the current plague of locusts besetting the region is just adding to their collective misery.

"Deliberate starvation is quite clearly occurring along ethnic and political lines in an effort to marginalize dissident communities, as well as those perceived to be too disenfranchised to challenge the status quo or demand transitional justice mechanisms…Starvation as a war crime and as a crime against humanity has occurred and ought to be prosecuted," said Clapham.

The Commission report finds the government is riddled with corruption. It accuses government officials of plundering the national treasury.   It says up to 80 percent of monthly non-oil revenues are unaccounted for as they have been diverted from official accounts by the politicians.

Clapham says these officials are pocketing millions of dollars, depriving millions of vulnerable civilians with the food and basic services essential for their survival.

"Officials in the Government of South Sudan are implicated in this pillaging of public funds in South Sudan as well as money laundering, bribery and tax evasion," said Clapham.High ranking officials have used their official positions to influence decisions on the allocation of state resources and official procurement, diverting public funds for personal gain and, advantage.  This plundering of the public purse by officials is having a catastrophic impact on the humanitarian situation in South Sudan."

The 56-page report goes into great and horrific detail about widespread violations being committed by all parties to the conflict.  It describes the recruitment of child soldiers as young as 12, the pervasive sexual and gender-based violence, including conflict-related sexual violence and brutal cattle raids between ethnic communities.

The commissioners say they are gathering evidence of crimes, which will be presented in a confidential dossier to the U.N. High Commissioner for Human Rights.  They say this information will be available to support future prosecutions of those suspected of these crimes.

There was no immediate comment Thursday from South Sudan's government.  South Sudan's foreign minister is scheduled to address the U.N. Human Rights Council next Wednesday, and may have plenty to say then.

'Deliberate Starvation' Tactics Could Be a War Crime