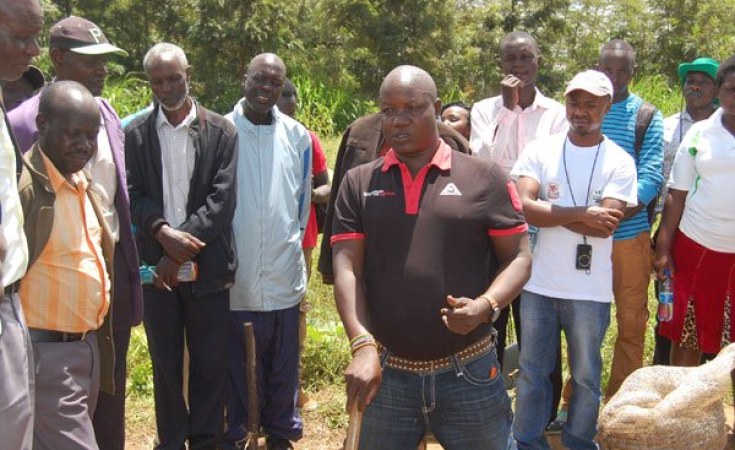 To boost potato production in Kenya, the government has approved 13 high quality and yielding potato seed varieties from Holland.

An agronomist at Agrico East Africa Athanasius Kaituyu revealed that four of the top performers which include destiny, manitou, markies and rudolph are already in the market.

The Holland-based company has been conducting massive multiplication of the high yielding seeds at the farm at Kabarak, Nakuru County.

"We have six varieties that we are producing but the national government has approved 13 seed varieties in the Kenyan market," said Mr Kaituyu.

The official was speaking at Salgaa farm in Rongai Sub-County during a demonstration where farmers from Salgaa, Mau Narok, Njoro, Molo and Nakuru town were given tips on potato farming to boost their yields.

The exercise aimed at preparing the farmers for the forthcoming contractual farming to be launched in the region.

During the exercise, farmers were introduced to markies variety for making French fries, crisping, fast food and fresh consumption.

The official assured farmers that all their varieties have undergone performance test.

"They [new varieties] were allowed in Kenya despite having local varieties like shangi and Tigoni because our yield is above 10 per cent the local varieties," said Mr Kaituyu.

Apart from being certified seeds with high yielding record, the new varieties are resistant to drought and diseases such as potato blight.

The official advised the farmers to use certified seeds and carryout soil testing if they hope to double their yields and earnings.

"We discourage farmers against recycling the seeds because they end up losing more than 15 per cent of the yields and that is why local varieties have dipped up to less than five tonnes per acre," said Mr Kaituyu who is also Smallholder Training and Extension Manager at Agrico East Africa.

He announced that certified seeds are capable of yielding up to 40 tonnes per acre as long as the farmer follow the agronomical aspects of planting the crop.

However, he emphasised the need to undertake proper soil analysis.

He said many farmers were haphazardly applying fertilisers to the crops according to their own estimation and imagination.

He added: "With soil analysis, farmers would know the proper timing to apply fertilisers and this will lead to improve harvest and more income."

Mr Andrea Cheruiyot, whose farm was used for demonstration, said many farmers in the region were not aware of the agronomical practices that could lead to increased potato yields.

"We have learnt a lot and I hope to apply the knowledge to double my yields," said Mr Cheruiyot.

"We shall link farmers with the market in conjunction with the Cereals Growers Association. As a company, we are happy to be associated with farmers wishing to take up new seed varieties like markies," said Ms Herweijer.