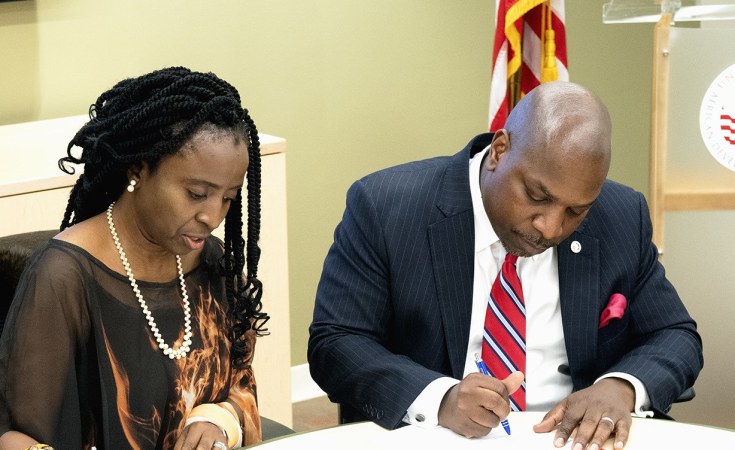 The USADF-LSETF Employability Program is a new five-year, $10 million commitment, with USADF and LSETF each contributing $1 million per year. LSETF is an agency of the Lagos State Government in Nigeria tasked with creating employment and entrepreneurship opportunities for all Lagos State residents. This new partnership builds on the success of each agency’s individual efforts – LSETF’s employability and loan program and USADF’s provision of seed capital and business advisory services to young entrepreneurs across 30 African countries.

“The average age of a Nigerian today is 17.9 years old, and the country’s population is growing at a rapid rate,” C.D. Glin, USADF’s President and CEO, points out. “It is therefore essential that the investments USADF makes in Nigeria, alongside partners such as LSETF, to address youth unemployment prioritize entrepreneurship, job creation and placement, and income generation.”
USADF President and CEO C.D. Glin spoke about the importance of the two countries working together.

The United Nations World Population Prospects report predicts that, by 2050, Nigeria will surpass the United States as the third-most populous country in the world, after China and India. The report also states that three-fourths of Nigeria’s people will be living in urban areas. The City of Lagos is already the most populous on the continent of Africa.

“On behalf of the Governor, Akinwunmi Ambode, and the people of Lagos State, it is an honor for me to join in the signing of this strategically important MoU,” says Ifueko Omoigui Okauru, Chair of LSETF’s Board of Trustees. “Nigeria’s National Bureau of Statistics reported in April 2019, that between Q3 2017 and Q2 2018, Lagos State was one of the nine states that recorded a reduction in unemployment rates despite an increase in the national unemployment rate. Lagos State also led the nation in job creation with more than 700,000 net full-time jobs. This partnership with USADF will ensure we maintain our top ranking and, more importantly, help transform the lives of thousands of young Lagos residents.”

The program will train at least 3,000 youth between the ages of 18 and 35 annually – for a total of 15,000 youth over five years – developing the relevant industry skills to gain and create employment in Lagos State. Each youth trainee will also be eligible for an internship for up to six months, with the expectation that the internship results in a sustainable job opportunity and helps trainees transition into entrepreneurs, if they desire.

Read the original article on USADF.

Tagged:
Copyright © 2019 United States African Development Foundation. All rights reserved. Distributed by AllAfrica Global Media (allAfrica.com). To contact the copyright holder directly for corrections — or for permission to republish or make other authorized use of this material, click here.