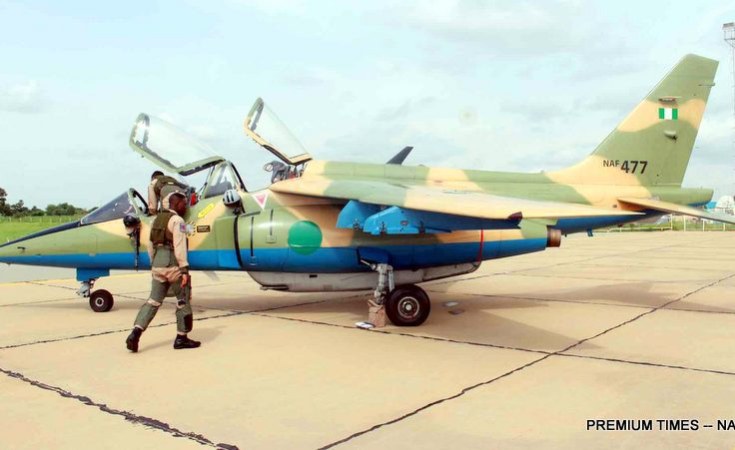 The Nigerian Air Force (NAF) yesterday said it killed some key leaders of the Islamic State of West Africa Province (ISWAP) at Jubillaram and Alinwa in the northern part of Borno State.

The statement however, did not give the number of those killed, their names or ranks in the group, but it added: "The mission was executed on the heels of credible intelligence reports indicating that some key ISWAP leaders had assembled for meetings, which were being held simultaneously at two separate venues, at Jubillaram and Alinwa in Marte Local Government Area.

"Accordingly, the ATF scrambled its attack aircraft to engage both locations, damaging the meeting venues and neutralising the terrorists," Daramola said. He said they were neutralised in operations conducted on Thursday.

Daramola said NAF, operating in concert with surface forces, would sustain its air campaign to shape the battlespace in the North East for the effective conduct of further ground and air operations.

According to him, Operation Rattle Snake III which commenced on February 4, was aimed at targeting selected locations within the North East in order to shape the battlespace for more effective onslaught against the insurgents.

A statement from the Task Force said the influential commander of the terror group was "eliminated" during an airborne attack on one of the insurgents' hideout on a Lake Chad community known as Tunbums Sabo.

The statement signed by Timothy Antigha, the spokesman of the MNJTF, indicated that Khalifa Umar was killed during an "ongoing offensive operations against ISWAP and other purveyors of violence and instability in the Lake Chad Basin."

Although ISWAP's main area of operations is further east in the Lake Chad area, the group has attacked a number of military locations in the Maiduguri-Biu-Damuturu triangle in recent months. In late July, ISIS claimed ISWAP fighters killed 25 Nigerian troops in Benisheikh and earlier that month claimed ISWAP fighters fought off a Nigerian military assault in the Damboa area.

In a related development, troops of the Operation Hadarin Daji in Zamfara State killed 13 bandits and arrested eight others in Zamfara State, the Acting Force Information Officer, Captain Ayobami Oni-Orisan said in a statement yesterday.

Other communities are Tsauwa, Dankar and Yan Gayya villages of Batsari Local Government Area of Katsina State and Gallai, Shirkai and 'Yarkuka villages in Kebbi state.

The operations resulted in the interception of a large ammunitions, neutralization of 13 bandits with several others fatally wounded, arrest of 8 suspected bandits ( including a female) and the recovery of several items.