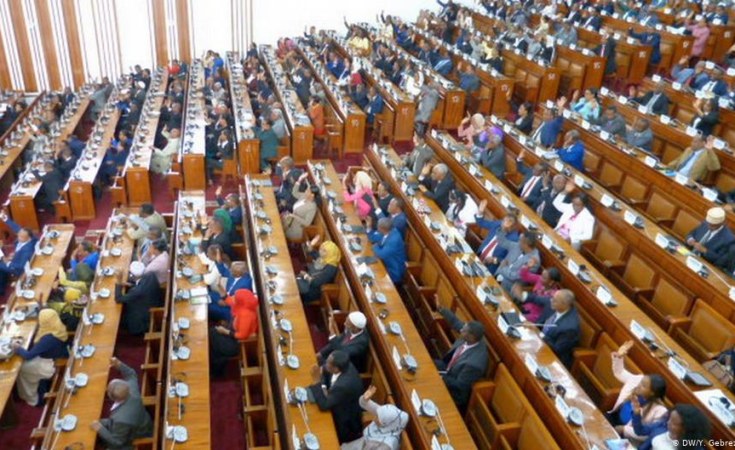 More and more African countries have laws against online hate speech. In practice, however, these laws often lead to censorship. And a German law may have served as a model.

Ethnic riots, armed uprisings, and violent protests are currently the order of the day in many parts of Ethiopia. It's not uncommon for this violence to be fueled by hatred, agitation, and disinformation spread online.

The government in Addis Ababa wants to take action. On February 13, it passed a law that aims at curbing hate speech and disinformation online. Internet users and platform operators who violate the new rules face up to three years of imprisonment and a fine of up to 100,000 birrs (€2,900, $3,145).

But since this law became a reality, it has only attracted criticism. Journalists, activists, and bloggers have sounded the alarm: Only a few months before national elections are due to be held in Ethiopia, on August 29, the law gives the government and security forces the ability to track down and punish opposition voices. Authorities justify this has fighting hate speech online.

Should critical voices be silenced?

Ethiopian blogger and activist, Befeqadu Hailu, says the new laws signal trouble ahead. "The government can now prevent practically every blogger and social media user from posting their opinions online," she told DW. "I have big problems with the new law." The law is expected to prevent many journalists from publishing their stories and exercising their right to freedom of the press, according to the head of the Center for Law and Democracy.

But Ethiopia is by no means the only country that has passed such a law. Similar laws targeting internet hate speech have been around for a long time in Europe. In Germany, for example, the Network Enforcement Act (NetzDG), which was intended to combat hate crime on the internet, was passed in 2018. This and similar laws from Europe served as a template for authorities in Addis Ababa, says Befeqadu Hailu.

But a law that might make sense in Europe could have a very negative impact on press freedom in Africa, she explains. This is mainly due to a lack of legal certainty in countries like Ethiopia. "There is no functioning division of powers here, the judiciary only works to a limited extent," she says. "There [is nowhere] in which bloggers or journalists can turn if the security authorities overshoot the target and laws that are actually directed against hatred, against freedom of the press and freedom of expression."

In any case, Ethiopia is poorly positioned when it comes to internet freedom. The country regularly scores very low in international rankings. The "Freedom on the Net Report 2019," which is published annually by think tank Freedom House, classes Ethiopia as a country "without internet freedom." Like many other countries in sub-Saharan Africa, including Nigeria, Kenya, and Uganda, researchers have even noted that the situation is worsening compared to previous years.

The German NetzDG may have contributed to the advance of internet censorship in Africa. At least that's what a study by the Danish civil rights think tank Justitia suggests. The title of the report alone speaks volumes: The Digital German Wall: How Germany (Accidentally) Created a Prototype for Global Online Censorship.

Take Kenya, for example: In June 2017, shortly after the first presentation of the NetzDG in the German Bundestag, parliament passed a law against hate speech online, explains Jacob Mchangama, a Danish lawyer and director of Justitia. "I think the German NetzDG law has given justification to African countries, many of them authoritarian," he told DW. "I think these countries probably would have created online censorship laws anyway, because they always had problems with freedom of expression, even before the internet. But when one of Europe's leading democracies makes a law that creates possibilities for online censorship, then it becomes much easier for authoritarian states to justify online censorship."

It is particularly noteworthy that the new laws in Kenya were adopted in such a short space of time, shortly after the introduction of the German law, and used practically the same instruments and measures for regulating social media platforms, says Mchangama.

Similar to German law, the Kenyan guidelines require social media service providers to delete "unwanted political content and hate posts that are used on their platforms within 24 hours." Network operators are required to delete criminal content, and the German NetzDG states that "obviously illegal content must be deleted within 24 hours," otherwise repeated fines or "systemic failure" can add up to fines of up to €50 million.

Mchangama says you don't need to be well-versed in aspects of the law to suspect that platforms in Europe and Africa that face such a high fine would instead delete too much than too little.

So, is Germany to blame for internet censorship in Africa? Ultimately no, says Mchangama. After all, Germany did not intend to create a prototype law for internet censorship. It's also true that, sooner or later, most African regimes would have passed their own laws to keep control over the internet anyway -- with or without Germany's help.

Nigeria's approach towards tackling online hate speech further proves that these laws can be even more radical. The Nigerian Senate is currently considering two strict bills covering freedom of expression online. Both give authorities excessive power to shut down the internet, restrict access to social media, and punish government critics with up to three years in prison. One of the bills goes even further: If it becomes law, in the worst cases, those who engage in hate speech online will be threatened with the death penalty.