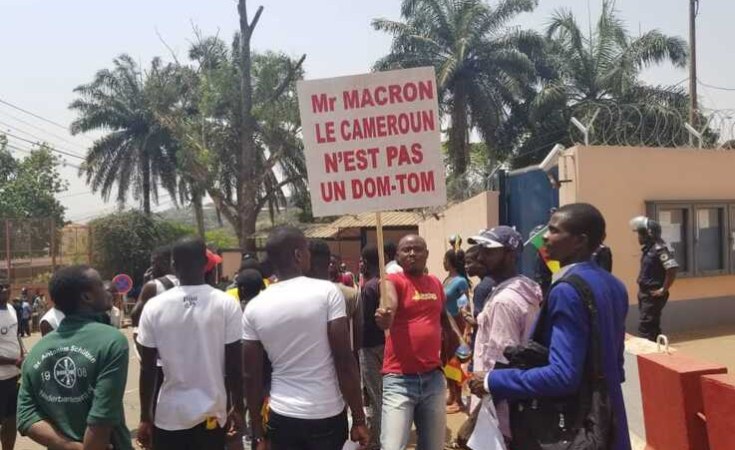 Moki Edwin Kindzeka/VOA
Youths protest against French President Emmanuel Macron's declarations over how Cameroon is handling the conflict in its English-speaking regions outside the French embassy in Yaounde, Feb. 24, 2020.
UN News Service

Four senior UN officials issued a joint statement on Friday deploring the continued human rights abuses committed against civilians, including women and children, in the south-west and north-west regions of Cameroon.

"We are deeply concerned about reports of violence, including the 14 February attack on Ngarbuh village in the Northwest region that left 23 civilians dead, including 15 children", they said.

They deplored reports of continued attacks against civilians, including extra-judicial killings, torture, arbitrary arrests and destruction of property, as well as retaliatory attacks, rape and other forms of sexual violence that disproportionately affect women and children in the north- and south-west regions of the country that are forcing many to flee their homes.

"Children continue to be particularly affected by the crisis", they lamented.

Citing reports of school attacks and extensive closures in the affected regions, they said that "thousands of children out of school".

The senior UN officials added that information received on the recruitment and use of children by armed actors and their detention for actual or alleged association with armed actors "raise further protection concerns."

Moreover, hundreds of thousands of people are reported to have been displaced in the affected regions, with a lack of security further exacerbating the plight of marginalized and vulnerable groups.

"It is urgent to prevent further violence and to protect all women, girls, boys and men from grave violations of international humanitarian and human rights law", they continued.

"Severely constrained humanitarian access and limited resources for service-providers has reduced the availability of sexual and reproductive healthcare for women, including urgent treatment for survivors of sexual violence".

The four senior officials called on the Cameroonian Government to discharge its primary responsibility in protecting the population by addressing the root causes of violence and ensuring that victims of the attacks are provided with protection and the appropriate assistance.

They further called on the authorities to fully investigate and hold accountable those responsible for the serious violations and abuses that have been committed.

"We urge the Government of Cameroon to ensure full respect for human rights, including the rights of women and children, and to ensure that the humanitarian needs of civilians are met", the UN officials said.

In closing, they reminded the Government that "children associated with armed groups should be considered primarily as victims and their detention used only as a last resort and for the shortest period of time".

"We also emphasize that all forms of sexual violence are categorically prohibited under international humanitarian and human rights law", the four UN officials concluded.

They offered UN support and assistance to the Cameroon authorities to address the situation and improve protection and service-delivery for civilians in affected areas, and for those who have been forcibly displaced.

Previous Story
Tagged:
Copyright © 2020 UN News Service. All rights reserved. Distributed by AllAfrica Global Media (allAfrica.com). To contact the copyright holder directly for corrections — or for permission to republish or make other authorized use of this material, click here.