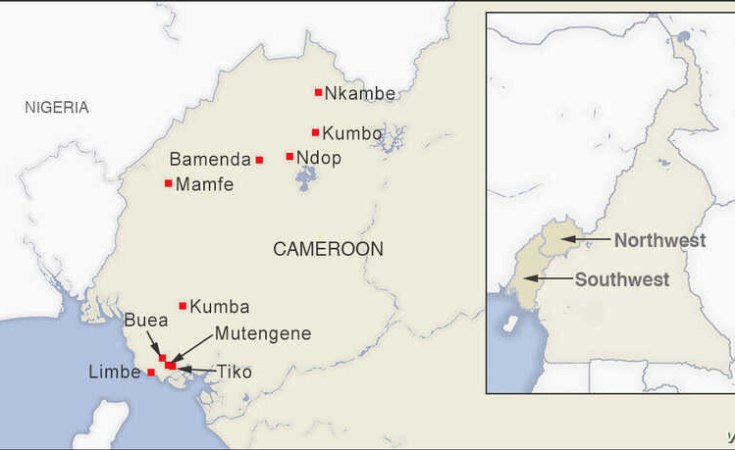 Bamenda, Cameroon — Renewed fighting in Cameroon's restive English-speaking region has forced more than 70 people, mainly women and children, to flee for their lives and seek shelter at an orphanage. Many of them, however, are very ill, battling malaria and severe malnutrition. Others are dealing with fresh wounds from the fighting between government troops and separatist fighters.

They look tired, hungry, unkempt and sick. The victims of the separatist violence in the English-speaking northwestern Menchum administrative unit say that in the past two weeks, they have escaped escalating conflict.

Comfort Finni, a 23-year-old mother of two, says she fled Menchum when men dressed in military uniforms torched the 32 houses in their village. Finni says the violence took the lives of her husband and oldest daughter.

"I am from Fang  [village]," said Finni. "We were just living in the village, some people just came and burned our village so we ran and went to the bush, to the forest. We made two weeks in the forest before coming out."

Finni says the military, along with health workers with the Roman Catholic Church, rescued her in the locality of Wum. Finni says she has been living at the orphanage for close to one week.

Most of the victims are children and women who say they were molested by both the military and separatist fighters.

Fifty-five-year-old Moses Kum is one of only five men in the group of escapees. Kum says he does not know if his second wife and two children are still alive, adding that he spent several days in the bush foraging.

"Cutting fruits in the bush and managing to live, so we thank God that God helped us to trek for three days before reaching Bafmen," said Kum.

Humanitarian workers with the Roman Catholic Church and Red Cross took Kum and eight others from the town of Bafmen to the orphanage.

Health worker Peter Ngwa says taking care of the displaced is a challenge because of a lack of resources.

"We are focused on malaria which I know is passed by mosquitoes which are mostly common in the bushes where they have been staying," said Ngwa. "We are concerned about HB [hemoglobin] blood level, which is also linked to nutrition. So when we test these parameters, we can give advice to them based on the results on how to go about to remedy the situation."

"When the governor gave me the report my immediate reaction was that let us come and visit the place, give the first assistance what they call first aid, then after, we see gradually what can be done," said Nji. "You can see the material that we have brought from the humanitarian plan of action given by President Paul Biya. At the same time, we will provide some financial assistance because they need medication; they need special attention."

Nji denied allegations the military was responsible for some of the atrocities.

Rights group Human Rights Watch has always blamed both government troops and separatist fighters for gross human rights violations, saying that Cameroonian security forces respond to increasing attacks by armed separatist groups by burning homes and other property in villages across the Northwest and Southwest regions.

Separatists have been fighting since 2017 to detach English-speaking North-West and South-West Cameroon from the rest of the country and its French-speaking majority.
The secessionist uprising has left three thousand people dead H and forced 500,000 others to flee either to the French-speaking regions or into neighboring Nigeria, according to the United Nations.

Partial Election Rerun Ordered in Cameroon's Troubled Regions
Tagged:
Copyright © 2020 Voice of America. All rights reserved. Distributed by AllAfrica Global Media (allAfrica.com). To contact the copyright holder directly for corrections — or for permission to republish or make other authorized use of this material, click here.